Sherman is currently in King County Jail on a domestic violence charge.

Redmond police responded to a call at 1:49 a.m. that an adult male who did not live in the home was attempting to force his way in. The residence belongs to the parents of Sherman's wife, police said in a press conference Wednesday afternoon.

Additionally, Washington State Patrol is investigating Sherman in connection with a hit-and-run Wednesday morning. Reports of an impaired driver who entered a closed construction zone on eastbound SR 520 came in at 1:26 a.m. Sherman is suspected to have walked to where the 911 call was placed less than 30 minutes later, police said.

His vehicle was found abandoned with considerable damage in a commercial parking lot near the off-ramp.

When officers arrived at 18100 block of NE 30th St., Sherman and responding officers spoke calmly after probable cause was established, according to Redmond police chief Darrel Lowe. But when Sherman was told he would be placed under arrest, the situation shifted and Sherman attempted to walk away and then resisted when officers made contact, officials said.

"As he was walking away from the officers (Redmond police), he walked toward the (state) troopers and one did take him to the ground," said Washington State Patrol captain Ron Mead. "He suffered no injuries of a result of that takedown, but he was taken to the ground."

At some point, a K9 unit was also deployed and subdued Sherman. He and the officer both sustained minor injuries, police said. Sherman was treated at a local hospital for his injuries and booked into King County jail. No other injuries were reported from the scene.

His wife also called 911 earlier that night to report that he was intoxicated and acting aggressive and erratic.

"This arrest from our perspective and I think safe to say Redmond's perspective, is being treated no differently because of the high-profile nature of the involvement," said Mead. "The process will play out as it does with everyone else.".

Sherman has not been yet been criminally charged. Because of the domestic violence aspect, Sherman will remain in jail until he appears before a judge, officials said. 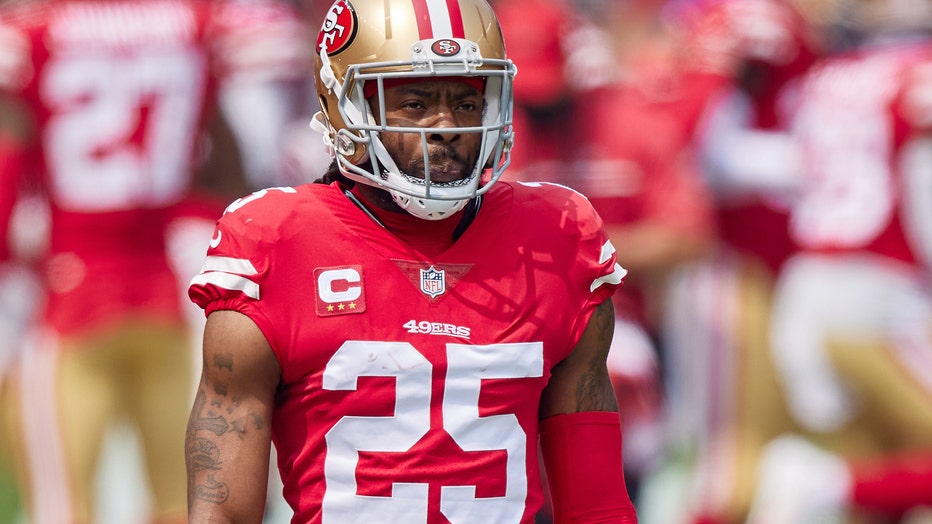 SAN FRANCISCO, CA - SEPTEMBER 13: San Francisco 49ers cornerback Richard Sherman (25) looks on during the NFL game between the San Francisco 49ers and the Arizona Cardinals on September 13, 2020, at Levi's Stadium in Santa Clara, California. (Photo b

The 33-year-old is currently a free agent after three seasons with the San Francisco 49ers and he has been contemplating a return to the Seahawks, where he spent seven seasons and helped lead the team to a 2014 Super Bowl victory. He's been selected to five Pro Bowls in his 10-season career and is the vice president of the NFL Player's Association's executive committee.

"We were made aware of an arrest last night of one of our player leaders for an alleged domestic violence incident and have activated our domestic violence crisis protocol for the protection and support of everyone involved," the NFLPA said in a statement.