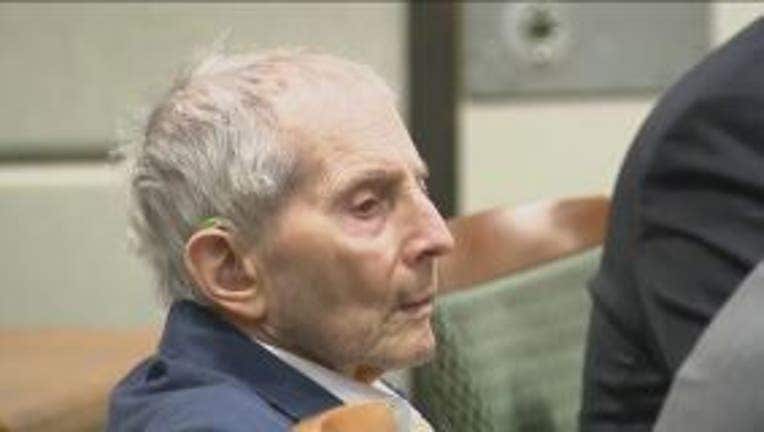 LOS ANGELES - Robert Durst's brother testified Monday that he never saw any violence in his older sibling's first marriage, but said his brother wanted to kill him and that he took those threats seriously.

Asked about how his brother feels about him, Douglas Durst replied, "He'd like to murder me."

"Are you aware of your brother, in fact, making calls from Pennsylvania discussing that very subject?" Deputy District Attorney John Lewin asked.

"Did you take those threats seriously?" Lewin asked.

"Yes, I did," the witness responded.

Robert Durst is on trial for the murder of Susan Berman, a longtime friend killed in Benedict Canyon in 2000. The New York real estate scion is also accused of killing his first wife, Kathie Durst, and was acquitted of murder after killing and dismembering a neighbor in Texas.

Douglas Durst is roughly a year and a half younger than his 78-year-old brother, but looked decades his junior, his bright white dress shirt showing off a deep tan and his salt-and-pepper hair. His voice was easily heard through a thick face mask he wore throughout his testimony about his brother, who sat in a wheelchair wearing jail clothes, ashen and frail.

Outside the presence of the jury, Lewin had complained that the defendant, who is in ill health and catheterized, was seeking the jury's sympathy by refusing to have a bag of urine emptied and holding it up in view of the panel.

"I want to make sure that that bag is not utilized as a prop," Lewin said, after citing other ways in which the prosecutor believed Durst sought to manipulate jurors' emotions.

In a rare move, Durst stood and spoke to the court in a raspy, shaking, but determined voice.

"I am not seeking sympathy from the jury. My head is shaved because this is the only kind of haircut I'm able to get in the can," Durst said, pushing back against the idea that it was done to draw attention to a shunt in his skull. "I have been doing everything possible to get the ... doctors at (the jail) to remove the bag. I don't want to have the catheter at all."

Los Angeles Superior Court Judge Mark Windham said he would talk with the lawyer who represents the jail medical staff about the issue.

After the panelists were seated -- back in the close quarters of the jury box for the first time since the trial resumed after being shut down for more than a year due to the coronavirus pandemic -- Douglas Durst testified about his family's business.

Robert Durst has been long estranged from his real estate-rich family, which is known for vast real estate holdings in Manhattan, including ownership in high-profile properties like One World Trade Center.

Douglas, who is president of The Durst Organization, testified that his brother no longer had any interest in the trusts that make up the family's fortune because "he was bought out at his request" in 2006.

Robert had originally been designated as the primary manager of that wealth as the oldest son, but Douglas was appointed in his place in 1995, when their father, Seymour, died.

An acrimonious legal dispute took place in 2006 over Robert's share of the trust. Durst said the settlement amounted to tens of millions of dollars, and it has been previously reported as totaling $60 to $65 million.

Even as children, the pair didn't get along, according to Douglas, who said he last saw his brother at a family wedding in 2001 and believes he last spoke to him in 1999.

"We had a relationship where we could talk to each other, but it was always very wary and strained," Durst said. Growing up, "he treated me miserably ... he would embarrass me at every opportunity" and treated their other siblings "equally bad, always attacking them or holding them up to ridicule."

Douglas testified that his brother lied about seeing their mother jump or fall to her death from the roof of their home in Scarsdale, New York, when Douglas was 5 years old, saying it was impossible even if he had been at home.

Despite their fraught relationship, the two brothers lived together in a family house in Katonah with their wives and Douglas' children from about 1970-73.

"At that time, (Bob and Kathie) had a very good relationship," Douglas Durst said.

The two couples also visited once Bob and Kathie bought a cottage in South Salem.

"Our visits became less frequent because it was very uncomfortable being together with the two of them in the house. There was a lot of tension," the witness said. However, he said he "never saw any violence," and Kathie never told him she was afraid of her husband.

He remained close enough with Kathie that she told him in 1980 that her husband was stealing from The Durst Organization, he said. She also told him in the winter of 1980 that she was seeking a divorce.

Douglas countered his brother's contention that a divorce would have been unaccceptable to the family and affect the family trusts, saying that their uncle went through a messy divorce.

In response to the prosecution's questions about whether Douglas or his father had anything to do with Kathie Durst's disappearance, Douglas said he found the suggestion insulting and unequivocally denied any involvement.

Robert called him two days after his wife disappeared on Jan. 31, 1982.

"He told me that he put her on a train and he hadn't heard from her since," Douglas said, describing his brother's apparent lack of anxiety about his wife's whereabouts.

He offered his own knowledge of his brother's activities that week,saying Robert told him he wasn't in the city on Feb. 1, the day after Kathie was last seen.

The next day, Robert failed to show up and sign documents required for the purchase of a real estate property, forcing the company to delay the closing, and wasn't in the office on Feb. 3 either, the witness tetified.

Lewin said the defendant has previously said he was scouting for properties in Connecticut on Feb. 2.

Douglas said that wouldn't have been part of his brother's responsibilities, and "my father was frequently quoted as saying he wouldn't buy anything he could not walk to, and I always said, well I was glad he lived in Midtown."

Douglas testified that he helped concerned friends and family break into his brother's South Salem home to try and find evidence about Kathie's disappearance and later reported it as a burglary to state police to avoid making his brother mad.

"My brother, when he gets angry, he gets extremely angry," he said.

At one point, while Robert was still working at The Durst Organization, someone urinated into Douglas' wastepaper basket, prompting him to install a camera.

"I was able to confirm that Bob was entering my office," he said.

A follow-up question regarding Douglas' fear of his brother and alleging that the defendant showed up at Douglas' home in Katonah prompted a sidebar with the judge that jurors did not hear, in which Lewin claimed the defendant "has admitted to, in essence, plotting to kill his brother Douglas."

Douglas later told the prosecutor that he has hired security, including a team that accompanied him to court, and had reached out to the FBI in the past because "I have fear that my brother has threatened to kill me, and I have fear that he may have the means to do so."

The murder charge against Robert Durst includes the special circumstance allegation that Berman was killed because she was a witness to a crime.

The prosecution contends that Berman made a phone call posing as Kathie, which Durst's lead attorney, Dick DeGuerin, has countered by calling Berman a "storyteller" who had a "great imagination" and "made things up."

The prosecutor told jurors earlier that the evidence would show that Durst shot and killed the 55-year-old Berman "out of survival" because he feared she would tell authorities about his involvement in Kathie Durst's disappearance.

During an updated opening statement last month when the trial resumed, Lewin called the cases of Kathie Durst and Berman "interrelated," and told jurors they would hear evidence that Durst killed his wife and used Berman to help cover up his part in the crime, and that he subsequently had to kill another person, Morris Black, in Galveston, Texas, in 2001, because he figured out who Durst was and was putting pressure on him.

"Susan Berman never saw what happened. She never knew it was going to happen. She turned around because she trusted him because he was her close friend. He was not someone to fear ... She took a few steps and he basically blew her brains out," Lewin said.

DeGuerin countered that his client had no motive to kill his longtime friend in her home in the Benedict Canyon area of Los Angeles and had nothing to gain from her killing.

"Bob Durst did not kill Susan Berman and he does not know who did," DeGuerin told the panel twice, reiterating his opening statement to jurors in March 2020.

Durst -- who contended that Black was killed during a struggle over a gun before Durst dismembered his neighbor -- was acquitted in Texas of that killing.

"Whoever killed Susan Berman left no clues. Kathie Durst disappeared without a trace. After Morris Black's death, the police found hundreds of clues," the defense attorney told the jury.

DeGuerin said Durst went to Berman's home in December 2000, found his close friend dead and "freaked out," then sent a note to Beverly Hills police about her body.

The defense attorney said Durst "had no motive and nothing to gain" by Berman's death, noting later that there was no forensic evidence linking his client to that killing.

DeGuerin also told jurors that his client -- whom he said suffered from what has been known as Asperger's syndrome -- has "been considered a little bit weird" and run away all of his life and "doesn't make what we would consider good decisions," reminding jurors that they will hear from the defendant during the trial.

DeGuerin told the panel that a six-part HBO series "The Jinx: The Life and Deaths of Robert Durst," in which the defendant was recorded saying "There it is, you're caught" and "killed them all, of course," was "heavily edited" and "not a documentary."

DeGuerin said his client "wanted his story out," but chose the wrong people to tell that story and realized by the time the fifth episode aired that it was a "hatchet job."

Durst has been behind bars since March 14, 2015, when he was taken into custody in a New Orleans hotel room hours before the airing of the final episode of the HBO series, which examined Kathie's disappearance and the killings of Berman and Black.