Residents of the Ukrainian capital began to flee Kyiv along congested highways on Feb. 24, 2022, following the start of announced Russian military operations in Ukraine. Credit: vidana_blonska via Storyful

KYIV, Ukraine - Photos and videos showed long lines of traffic heading out of the Ukrainian capital of Kyiv on Thursday after Russia launched a wide-ranging attack on the country, a move condemned by leaders around the world.

Sirens rang out in Kyiv and people massed in train stations and took to roads, as Ukraine's government said it was seeing a long-anticipated invasion from the east, north and south and reported more than 40 soldiers had been killed and dozens wounded.

Video showed residents sitting in gridlock traffic along the main Kyiv-Odessa highway as people tried to leave the capital. Other footage showed long lines of vehicles waiting to fill up at a gas station in northwest Ukraine.

"A full-scale war in Europe has begun," Ukrainian presidential adviser Mykhailo Podolyak said. "Russia is not only attacking Ukraine, but the rules of normal life in the modern world."

In announcing a major military operation, Russian President Vladimir Putin deflected global condemnation and cascading new sanctions — and chillingly referred to his country’s nuclear arsenal as he threatened any foreign country attempting to interfere with "consequences you have never seen."

NATO's chief said the "brutal act of war" shattered peace on the European continent, as the U.S.-led alliance mobilized more troops to move toward Eastern Europe. 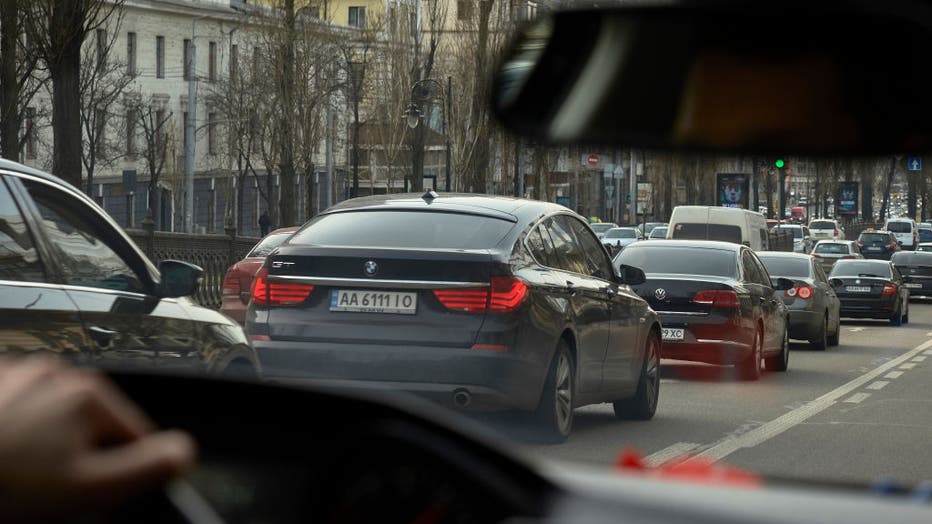 KYIV, UKRAINE - FEBRUARY 23: Traffic jam on February 23, 2022 in Kyiv, Ukraine. The country prepared to declare a state of emergency and called upon reservists to return to active duty in response to a looming threat of Russian invasion. On Monday, R

World leaders decried the attack, which could cause massive casualties, topple Ukraine’s democratically elected government, upend the post-Cold War security order and result in severe economic impact around the world from soaring heating bills to spikes in food prices.

"We woke up in a different world today," Germany’s foreign minister said, as NATO agreed to beef up air, land and sea forces on its eastern flank near Ukraine and Russia.

New video obtained by storyful shows explosions in Ukraine after Russian President Vladimir Putin announced a "military operation" in Ukraine, essentially announcing an invasion is underway. Explosions have been heard in multiple cities across Ukraine just hours after Putin issued the order.