After a month of escalating tensions, families of all American personnel at the U.S. Embassy in Ukraine were ordered by the State Department to leave the country on Jan. 23. Non-essential embassy staff was also allowed to leave at government expense.

Russia’s military has been building up troops and equipment along the Ukraine border, and fears of an invasion are mounting. Moscow has denied planning an attack.

The State Department also upped travel advisories to both countries due to "increased threats of Russian military action" and "ongoing tensions along the border, the potential for harassment against U.S. citizens" and "the embassy’s limited ability to assist U.S. citizens in Russia."

What’s causing tensions between Russia and Ukraine? How will this affect the United States? Here’s an overview of what’s happening in the region. 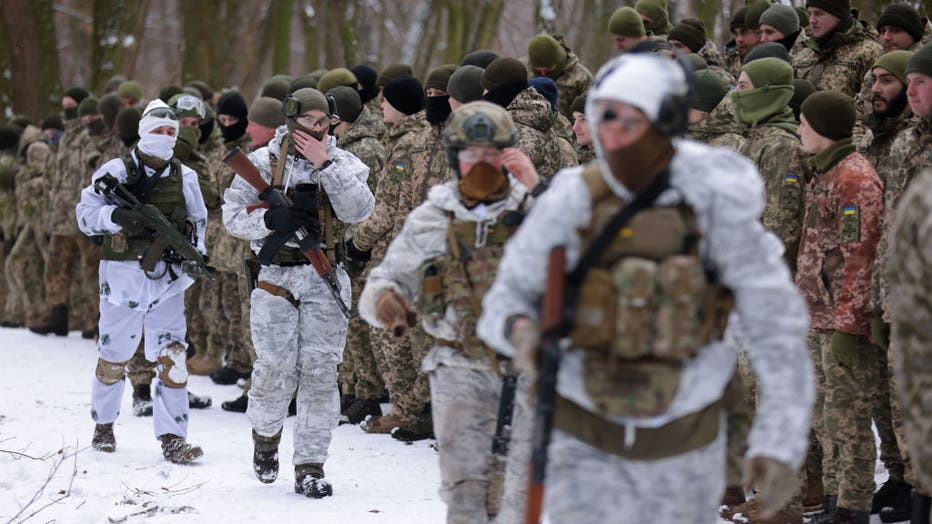 Civilian participants in a Kyiv Territorial Defence unit train on a Saturday in a forest on January 22, 2022 in Kyiv, Ukraine. (Photo by Sean Gallup/Getty Images)

Is Russia trying to invade Ukraine?

Russia has massed an estimated 100,000 troops near Ukraine’s border but denies it is planning an invasion.

The tensions between the two countries involve Russian President Vladimir Putin’s desire to reimpose ties with Russia's former Soviet neighbors, which include Ukraine. Since coming to power in 2000, Putin has worked steadily and systematically to reverse what he views as the humiliating breakup of the Soviet Union 30 years ago.

Putin is demanding that Ukraine be permanently barred from exercising its sovereign right to join NATO, and that other NATO actions, such as stationing troops in former Soviet bloc countries, be curtailed.

NATO has said the demands are unacceptable and that joining the alliance is a right of any country and does not threaten Russia.

Last week, officials in the United Kingdom asserted the Kremlin is seeking to replace Ukraine’s government with a pro-Moscow administration, a claim Russia’s Foreign Ministry has denied.

The challenge now for U.S. president Joe Biden, NATO and the European Union is whether their collective resolve and solidarity can protect Ukraine’s vision of itself as part of the West, and whether Putin’s Russian nationalist ambitions in the region will succeed or fail.

One way to think of the North Atlantic Treaty Organization is as the world’s biggest military alliance.

Any European nation that wants to join and can meet the requirements and obligations can do so. As of now, Ukraine is not a member.

The United States is without doubt the biggest and most influential member. It spends more on its own military budget than all the others combined. It also pays just over 22 percent of NATO common funding for infrastructure and collectively owned equipment. So Washington has a big say in how things are run.

The Soviet Union, during the Cold War, and Russia now have been major preoccupations since the organization was founded in 1949, and in many ways remain NATO’s reason for existing. Putin sees the NATO alliance as a threat to Russia’s security.

But the newer NATO countries take the opposite view. They regard Russia, which boasts the region's largest military and a vast nuclear arsenal, as the real threat, which is why they rushed to join NATO — afraid that a strengthened Russia might someday try to reimpose its dominance.

How is the U.S. involved with Ukraine and Russia?

Given its clear military inferiority, Ukraine could not prevent Russian forces from invading. But with help from the United States and others, Ukraine might deter Putin from acting if he were convinced that the costs would be too high.

Pentagon press secretary John Kirby says there are about 200 National Guard soldiers in Ukraine to train and advise local forces, and earlier in January, he said there are no plans to augment their number.

An undisclosed number of U.S. special operations troops are also providing training in Ukraine. Kirby wouldn't say whether the U.S. soldiers would pull out in the event of a Russian invasion, but he said the Pentagon would "make all the appropriate and proper decisions to make sure our people are safe in any event."

The U.S. administration said on Jan. 19 it is providing a further $200 million in defensive military aid to Ukraine. Since 2014 the United States has provided Ukraine with about $2.5 billion in defense assistance, including anti-tank missiles and radars.

On Jan. 23, the State Department ordered the families of all American personnel at the U.S. Embassy in Ukraine to leave the country.

The department told the dependents of staffers at the U.S. Embassy in Kyiv that they must leave the country. It also said that non-essential embassy staff could leave Ukraine at government expense.

State Department officials stressed the Kyiv embassy will remain open and that the announcement does not constitute an evacuation.

The move had been under consideration for some time.

Is the U.S. going to war with Russia?

Putin’s Russo-centric view of the region poses a crucial test for Biden.

Biden has ruled out military intervention to support Ukraine, and instead has employed intense diplomacy and rallied Western allies to support what he promises will be severe and painful sanctions against Russia if it dares to invade Ukraine.

But depending on how the situation plays out, he has admitted he could have trouble keeping all the allies on board.

The United States has no treaty obligation to Ukraine, and war with Russia would be an enormous gamble, given its potential for expanding in Europe, destabilizing the region, and escalating to the frightening point of risking a nuclear exchange.

Has Russia invaded Ukraine before?

The Russian leader has already invaded Ukraine once, with little reaction.

Russia took Crimea back from Ukraine in 2014 and has supported pro-Russian Ukrainian separatists fighting the Kyiv government in the Donbass region, a quiet war that has killed 14,000 people, more than 3,000 of them civilians.

This story was repored from Detroit. The Associated Press contributed.