As the war in Ukraine continues, Russia's president has declared martial law in the annexed regions of the country. LiveNOW from FOX's Josh Breslow explains what that means and what's next for the war.

MOSCOW - Russia’s defense chief alleged Sunday that Ukraine was preparing a "provocation" involving a radioactive device, a stark claim that was strongly rejected by U.S., British and Ukrainian officials amid soaring tensions as Moscow struggles to stem Ukrainian advances in the south.

Russian Defense Minister Sergei Shoigu made the allegations in phone calls with his counterparts from the United States, Britain, France and Turkey.

Russia's defense ministry said Shoigu voiced concern about "possible Ukrainian provocations involving a ‘dirty bomb,’" a device that uses explosives to scatter radioactive waste. It doesn’t have the devastating effect of a nuclear explosion, but could expose broad areas to radioactive contamination.

Russian authorities repeatedly have made allegations that Ukraine could detonate a dirty bomb in a false flag attack and blame it on Moscow. Ukrainian authorities, in turn, have accused the Kremlin of hatching such a plan. 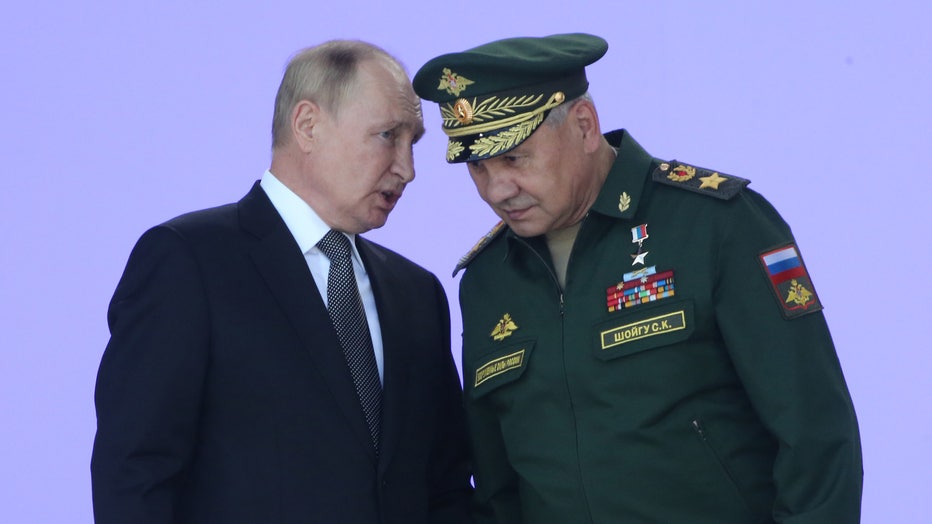 British Defense Secretary Ben Wallace strongly rejected Shoigu's claim and warned Moscow against using it as a pretext for escalation.

The British Ministry of Defense noted that Shoigu, in a call with Wallace, "alleged that Ukraine was planning actions facilitated by Western countries, including the UK, to escalate the conflict in Ukraine."

"The Defense Secretary refuted these claims and cautioned that such allegations should not be used as a pretext for greater escalation," the ministry said.

The U.S. also rejected Shoigu’s "transparently false allegations," White House National Security Council spokesperson Adrienne Watson said in a statement. "The world would see through any attempt to use this allegation as a pretext for escalation."

In a televised address Sunday evening, Ukrainian President Volodymyr Zelenskyy suggested that Moscow itself was setting the stage for deploying a radioactive device on Ukrainian soil. 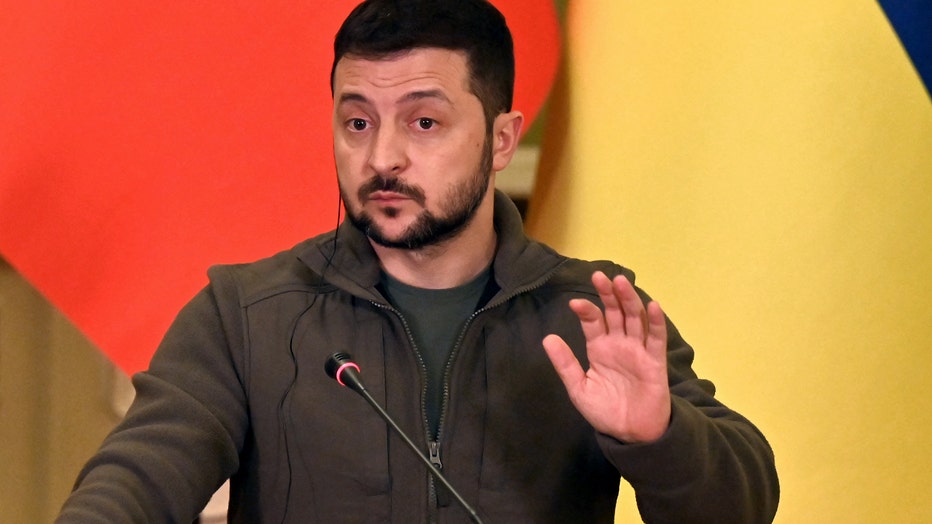 Ukrainian President Volodymyr Zelensky talks during a press conference with Swiss President following their talks in Kyiv on October 20, 2022. (Photo by SERGEI SUPINSKY/AFP via Getty Images)

"If Russia calls and says that Ukraine is allegedly preparing something, it means only one thing: that Russia has already prepared all of it," Zelenskyy said.

The mention of the dirty bomb threat in Shoigu’s calls seemed to indicate the threat of such an attack has risen to an unprecedented level.

The French Ministry of the Armed Forces said Shoigu told his counterpart, Sebastien Lecornu, that the situation in Ukraine was rapidly worsening and "trending towards uncontrollable escalation."

"It appears that there is a shared feeling that the tensions have approached the level that could raise the real threat for all," said Fyodor Lukyanov, the Kremlin-connected head of the Council for Foreign and Defense policies, a Moscow-based group of top foreign affairs experts.

The rising tensions come as Russian authorities reported building defensive positions in occupied areas of Ukraine and border regions of Russia, reflecting fears that Ukrainian forces may attack along new sections of the 1,000-kilometer (620-mile) front line of the war, which enters its ninth month on Monday.

In recent weeks, Ukraine has focused its counteroffensive mostly on the Kherson region. Their relentless artillery strikes cut the main crossings across the Dnieper River, which bisects the southern region, leaving Russian troops on the west bank short of supplies and vulnerable to encirclement.

Kirill Stremousov, the deputy head of the Russian-installed regional administration in Kherson, said Sunday in a radio interview that Russian defensive lines "have been reinforced and the situation has remained stable" since local officials strongly encouraged all residents of the region's capital and nearby areas Saturday to evacuate by ferry to the river's east bank.

The region is one of four that Russian President Vladimir Putin illegally annexed last month and put under Russian martial law on Thursday. Kherson city has been in Russian hands since the early days of the war, but Ukraine's forces have made advances toward reclaiming it.

About 20,000 Kherson residents have moved to places on the east bank of the Dnieper River, the Kremlin-backed regional administration reported. The Ukrainian military said Sunday that Russia's military also withdrew its officers from areas on the west bank, leaving newly mobilized, inexperienced forces.

The Ukrainian claim could not be independently verified.

READ MORE: Pope Francis implores Putin to 'stop this spiral of violence and death' in Ukraine

The governor of Russia's Kursk region, Roman Starovoit, said Sunday that two defensive lines have been built and a third one would be finished by Nov. 5.

More defensive positions were being built in the Luhansk region of eastern Ukraine, said Yevgeny Prigozhin, a millionaire Russian businessman who owns the Wagner Group, a mercenary military company that has played a prominent role in the war.

Prigozhin said his company was constructing a "Wagner line" in the Luhansk region, another of the Ukrainian provinces Putin illegally annexed last month. Prigozhin posted images last week showing a section of newly built defenses and trench systems southeast of the town of Kreminna.

The British Defense Ministry said Sunday "the project suggests Russia is making a significant effort to prepare defenses in depth behind the current front line, likely to deter any rapid Ukrainian counteroffensives." 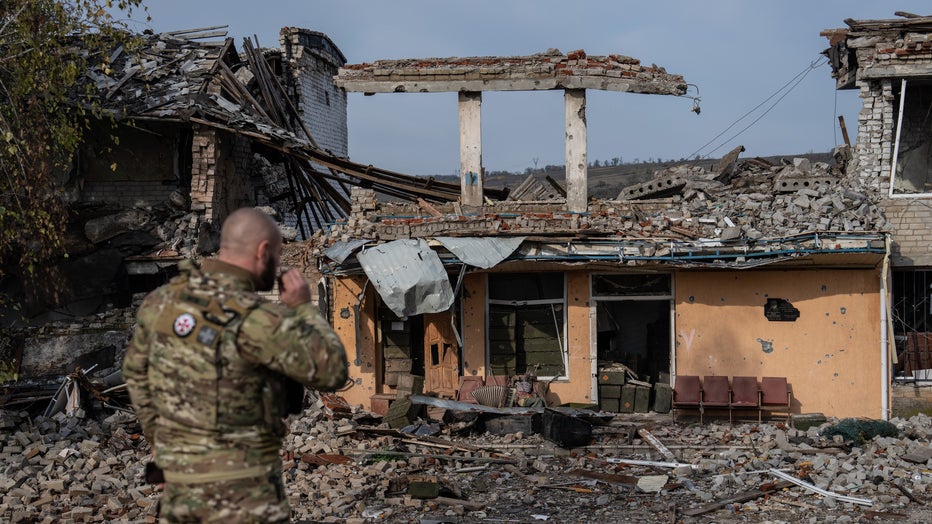 KAM'YANKA, UKRAINE - OCTOBER 22: A soldier looks at a school that was destroyed during fighting between Ukrainian and Russian occupying forces, on October 22, 2022 in Kam'yanka, Kharkiv oblast, Ukraine. Ukrainian president Volodymyr Zelensky has accu

Russia’s forces captured Luhansk several months ago. Pro-Moscow separatists declared independent republics in the region and neighboring Donetsk eight years ago, and Putin made controlling all of both provinces a goal at the war’s outset.

The Institute for the Study of War, a think tank in Washington, said Sunday that Russia’s latest strategy of targeting power plants appeared aimed at diminishing Ukrainians’ will to fight and forcing the government in Kyiv to devote more resources to protecting civilians and energy infrastructure.

It said the effort was unlikely to damage Ukrainian morale but would have significant economic impacts.

President Zelenskyy said Sunday that utilities workers were well on their way to restoring electricity supplies cut off by large-scale Russian missile strikes Saturday, but acknowledged that it would take longer to provide heating.

Nine regions across Ukraine, from Odesa in the southwest to Kharkiv in the northeast, saw more attacks targeting energy and other critical infrastructure over the past day, the Ukrainian army's general staff said. It reported a total of 25 Russian airstrikes and more than 100 missile and artillery strikes around Ukraine.

In response, Zelenskyy appealed to mayors and other local leaders to ensure that Ukrainians heed official calls to conserve energy. "Now is definitely not the time for bright storefronts and signs," he said.

Aamer Madhani and Lolita Baldor in Washington and Joanna Kozlowska in London contributed to this report.