Students say they are forced to sit on hot asphalt

Students at a middle school in San Bernardino say they are being forced to sit on the hot asphalt during PE and can only use the bathroom once a month.

SAN BERNARDINO, Calif. - When Ali Payne’s daughter came home from school with red welts on the backs of her legs she posted an angry message on the I Love San Bernardino Facebook page. She said her daughter had to sit on hot asphalt while her PE teacher took attendance at Arrowview Middle School in San Bernardino.

It wasn’t long before she heard from many other parents complaining about the same problem, as well as students in classrooms without air conditioning. But perhaps the most troubling complaint was that students were being denied a change in the school's bathroom policies, so they could use the bathroom to wet their hair down, or fill water bottles.

"What bathroom policy," I asked several parents and students, only to be told, again and again, that bathrooms are closed between classes, and that students are allowed a pass once a month, or five times a semester, for emergencies. 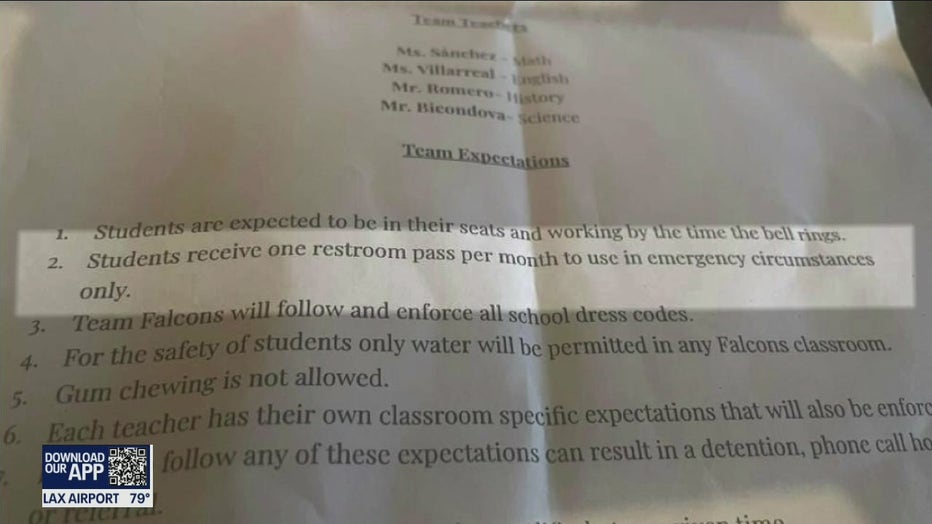 Schools district officials say that there is no district policy limiting bathroom use. Schools allow their teacher teams to decide how to handle bathroom passes, but generally, bathrooms are locked between classes so that kids won’t be late for class.

One mother picking up her child from school early, because she couldn’t concentrate in a non-air conditioned classroom, told me she has complained to the principal about the policies. Arrowview administrators, through district officials, say they have received no complaints about the bathrooms or air conditioning problems. They also say that PE is held outside only before 10 a.m., and that students are allowed to stand, not sit on the asphalt during roll call.

"If my child told teachers that I, at home, wasn’t letting her use the bathroom, or forced her to sit on hot asphalt, they’d be calling Child Services on me," one parent told me.

In a statement to FOX 11, the district says that there is no district or school-wide policy that limits bathroom visits. "Some individual teachers may have established classroom expectations that limit passes, but the principal has instructed teachers to allow students access when necessary regardless of their classroom guidelines," the district said. "No student should be prevented from accessing the restroom in situations like those you described, and the principal has received no complaints about this issue."

"It comes down to common sense," says school board member Danny Tillman, who met me at the school to find out about the complaints. He actually attended the middle school as a child, as well as San Bernardino High, so he seemed quite concerned.

In terms of air conditioners, he explains that in his district, El Cajon High was actually shut down for two weeks while air conditioners were repaired, so "we’ll do what we need to do to protect the students."

The district says that the AC outages are isolated to just a few rooms in the district, and that, "most of the outages over the past week have affected a single classroom," but that some additional classrooms have experienced issues as well.

"When a classroom air conditioner goes out, students are typically moved tother locations on campus," the district said, adding that two sites recently canceled afterschool programs because of outages.

In terms of PE classes, he wants to follow up with the asphalt issue, especially if it happened, as some students are saying, during 5th period, which would be way after 10 a.m.

As for the bathroom issue, we are told there is no district or school policy about bathroom usage. That pass access is left to teacher teams, but they are told they should not deny access to or penalize students who need to use a bathroom.

The bathroom issue touches on more than hot weather needs, though. Off camera, several students told me about 13-year-old girls bleeding through their pants in class, when they couldn’t go to the bathroom during their menstrual cycle. Tillman was obviously concerned hearing that, saying that not every student has the same physical needs and that teachers have to allow for that. The district wants to keep students from gathering in bathrooms between classes, and prevent vandalism and drug use. But as one parent said, "there has to be a better way" than to tell students they can only use the bathrooms once a month.

District officials say they are looking into the matter, as is Tillman, but that they have received no complaints.

Anyone who wants to report an issue to the district can do so by calling 909-381-1245, or by sending Tillman an email at danny1tillman@hotmail.com.