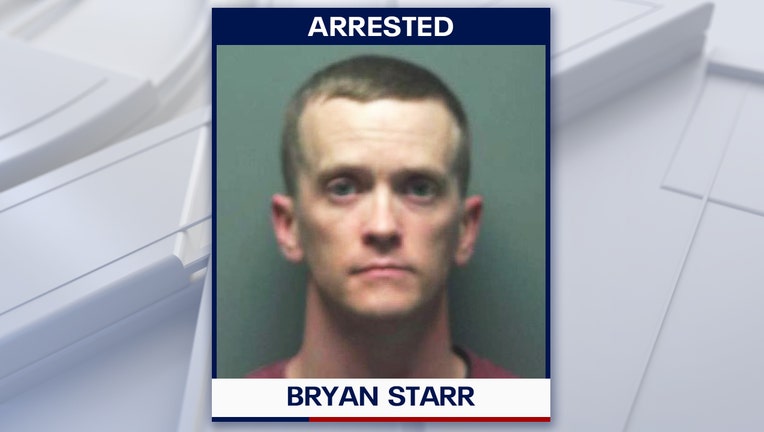 Bryan Starr was charged with reckless murder in connection with the death of his girlfriend's 5-year-old son. (Russell County Sheriff's Office)

FORT MITCHELL, Ala. - An active-duty soldier is facing criminal charges after his girlfriend’s 5-year-old son was struck and killed on a busy highway in Alabama after he allegedly forced the child to get out of the car in the rain and after dark as punishment.

Bryan Starr, 35, told investigators he was driving near Fort Mitchell, Ala., when 5-year-old Austin Birdseye started to become “unruly” inside the vehicle. Starr said he then pulled over in a church parking lot and told the boy to get out, Russell County Sheriff Heath Taylor explained in a virtual press conference.

Starr allegedly told investigators he lost view of the child in the rain. It was unclear how much time passed before Birdseye wandered onto the busy Highway 165 near County Road 24, where he was struck around 8 p.m. The boy was rushed to Piedmont Columbus Regional, where he was pronounced dead at 8:51 p.m., Russell County Coroner Arthur Sumbry Jr. confirmed to WTVM.

“It’s just horrific. I can’t imagine the mother’s grief that she is going through. It’s just tough. What do you say to that?” Taylor said at the press conference. “What is your thought process when you tell a 5-year-old to get out of the car on a rainy night because they were loud in the car? It’s just heartbreaking.”

Investigators are retrieving surveillance video from the church parking lot. The deadly crash happened just a few miles from the home Starr shares with his girlfriend in Fort Mitchell, WRBL reported. Taylor said the woman was not with Starr when he told her son to get out in the rain. He added that the driver who struck the boy is not at fault and is devastated.

Starr, a soldier stationed at Fort Benning, was questioned by investigators at the hospital and later turned himself in to the Russell County Sheriff’s Office. He was charged with reckless murder and was booked into the Russell County Detention Facility. He is eligible for bond.

RELATED: 'A senseless tragedy': Polk teens charged as adults after woman dies weeks after being run over

Originally from Marengo, Ill.,  Starr is a sergeant first class assigned to the 3rd Squadron, 16th Cavalry Regiment, 316th Cavalry Brigade stationed at Fort Benning. The military base is in Georgia, about 3 miles across the state border from where Starr lives in Alabama. Starr has 17 years of service, which includes one combat tour to Iraq.

“We are deeply saddened by this tragic event and extend our heartfelt condolences to the family of the deceased,” Ben Garrett, spokesman for Fort Benning, said in a statement.