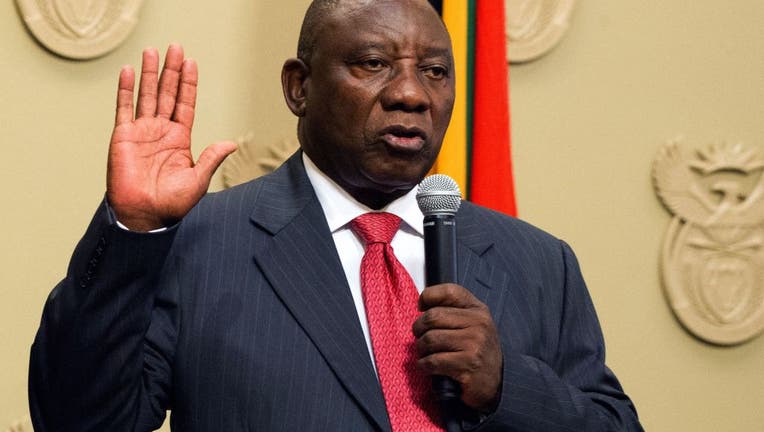 South Africa's new president Cyril Ramaphosa holds up his right hand as he is sworn into office after being elected by the Members of Parliament at the Parliament in Cape Town, on February 15, 2018. - South African lawmakers elected wealthy former bu

Ramaphosa started feeling unwell and a test confirmed COVID-19, a statement from the presidency announced.

He is self-isolating in Cape Town and is being monitored by the South African Military Health Service, the statement said. He has delegated all responsibilities to Deputy President David Mabuza for the next week.

Ramaphosa, 69, is fully vaccinated. The statement didn’t say whether he had been infected with the omicron coronavirus variant.

The World Health Organization’s COVID-19 Technical Lead urged people to take steps to reduce transmission and get vaccinated on Thursday, November 25, following the discovery of a new variant of the virus in South Africa. (Credit: WHO via Storyful)

Ramaphosa said his own infection serves as a caution to all people in South Africa to be vaccinated and remain vigilant against exposure, the statement said. Vaccination remains the best protection against severe illness and hospitalization, it said.

People in South Africa who have had contact with Ramaphosa on Sunday are advised to watch for symptoms or to have themselves tested, it said.

The country recorded more than 18,000 new confirmed cases Sunday night. More than 70% of the cases are estimated to be from omicron, according to genetic sequencing surveys.

After a period of low transmission of about 200 new cases per day in early November, South Africa COVID-19 cases began rising dramatically. On Nov. 25, scientists in southern Africa confirmed the omicron variant, which has more than 50 mutations. Omicron appears to be highly transmissible and has quickly become dominant in the country. So far, the majority of cases have been relatively mild and the percentage of severe cases needing oxygen have been low, say doctors.