KINGSTOWN, St. Vincent - Videos coming out of the Caribbean are showing the devastating effects of the recent and continued eruptions of the La Soufriere volcano on the island of St. Vincent.

Plumes of smoke continue to billow into the air as precious resources are being tainted by the falling ash.

Satellite footage recorded the exact moment of just one of the many eruptions that have taken place on April 13 since the beginning of the volcanic activity on April 9.

Satellite imagery captured the most recent volcanic activity at St Vincents La Soufriere volcano, which exploded again on the morning of April 13.

Leaders of St. Vincent said Tuesday that water is running short and they estimated that the island will need hundreds of millions of dollars to recover from the eruption.

Extremely dangerous volcanic material was flowing through a river in St Vincent and the Grenadines on Monday, April 12, following an eruption by La Soufriere, officials said.

Between 16,000 to 20,000 people have been evacuated from the island’s northern region, where the exploding volcano is located, with more than 3,000 of them staying at more than 80 government shelters.

One group of residents living in the town of Owia on St. Vincent had to be rescued on April 10, just one day after the first eruption.

Video captured the Saint Vincent and the Grenadines Coast Guard escorting people onto boats and ferrying them to the Kingstown Cruise Ship Terminal.

The "red zone," which includes Owia, has been categorized as a "very high hazard" area expected to receive the most damage, officials said.

The Saint Vincent and the Grenadines Coast Guard rescued people from the town Owia on Saturday, April 10, a day after the volcano La Soufriere erupted, officials said.

Dozens of people stood in lines on Tuesday for water or to retrieve money sent by friends and family abroad. Among those standing in one crowd was retired police officer Paul Smart.

"The volcano caught us with our pants down, and it’s very devastating," he said. "No water, lots of dust in our home. We thank God we are alive, but we need more help at this moment."

Gonsalves said in a press conference on local station NBC Radio that St. Vincent will need hundreds of millions of dollars to recover from the eruption.

He added that no casualties have been reported since the first big blast from the volcano early Friday.

"We have to try and keep that record," he said. Gonsalves said some people have refused to leave communities closest to the volcano and urged them to evacuate. 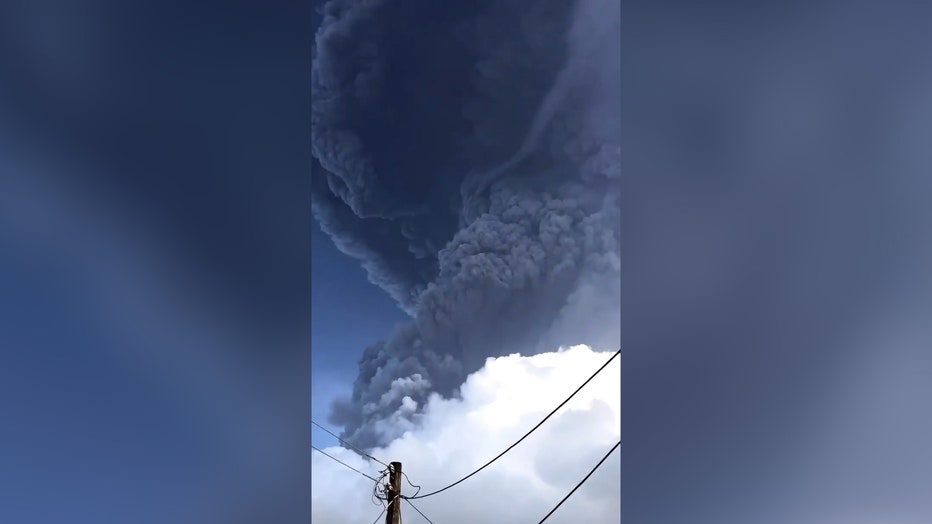 Falling ash and pyroclastic flows have destroyed crops and contaminated water reservoirs. Garth Saunders, minister of the island’s water and sewer authority, noting that some communities have not yet received water.

"The windward (eastern) coast is our biggest challenge today," he said during the press conference of efforts to deploy water trucks. "What we are providing is a finite amount. We will run out at some point."