A timelapse taken from the summit of Oregon’s Black Crater volcano captured the Perseids meteor shower on August 7. (Credit: Mike Cohea via Storyful)

BLACK CRATER, Ore. - Stunning time-lapse footage captured the Perseids meteor shower over a volcano in Oregon on Aug. 7 and it literally looks like a scene from a fantasy movie.

The beautiful footage, shot by Mike Cohea, shows the summit of Oregon’s Black Crater volcano as meteors can be seen streaking across the starry sky.

NASA said the 2021 Perseids meteor shower was set to peak this week.

"This year, even relatively faint meteors should be visible through clear skies from a dark location as the bright Moon will be mostly absent," the space agency said. 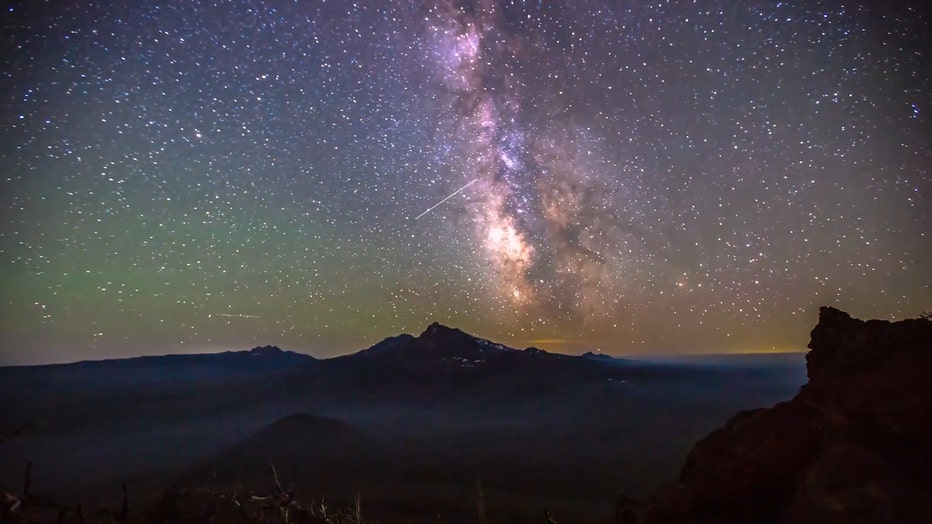 RELATED: Perseids meteor shower to dazzle in July, August — here’s how to watch

The Perseids are active every year from July 14 to August 24, but the meteor shower will peak between midnight and dawn on August 11, 12 and 13.

As the 109P/Swift-Tuttle comet orbits the sun, it leaves behind a trail of debris that Earth passes once a year.

When Earth passes through 109P/Swift-Tuttle’s debris, particles from the comet come into contact with Earth’s atmosphere, creating a meteor shower.

109P/Swift-Tuttle was discovered in 1862 by Lewis Swift and Horace Tuttle and measures around 16 miles across.

Storyful and Skyler Rivera contributed to this report.