Victor Pacheco threatened to kill his fiancée and fired gunshots near her before he was shot by officers in Mesa, police said.

MESA, Ariz. - A suspect was arrested after a reported domestic dispute in Mesa led to an officer-involved shooting on the night of Monday, Sept. 19.

The incident began about a mile and a half from Alma School Road and Main Street, where the shooting eventually took place, said Mesa Police Det. Brandi George.

There was an apparent domestic dispute between a man and his fiancée as officers responded to a "hysterical" 911 call from the woman. According to court documents, the woman claimed 43-year-old Victor Pacheco shot a gun near her face and threatened to kill her.

Pacheco allegedly accused the woman of cheating on him with a friend. He demanded to know her friend's name and when she did not provide it, Pacheco pushed her onto the couch and threatened to shoot her.

After firing off two shots, Pacheco left the home in a Mercedes, saying he was going to kill her friend.

"The responding officer stated the victim was very frightened and was hiding behind the bushes out of fear the defendant would return and find her," court documents read.

Pacheco then allegedly called the woman and denied shooting near her.

"The defendant then asked the victim why she called police, as he was watching her speak with officers," court documents read.

Police then spotted Pacheco in the Mercedes, and they followed him.

Officers conducted a "high-risk" pullover of Pacheco, and when they stopped him, he reportedly leaned out of his car holding what appeared to be a gun.

Three officers had their guns pointed at Pacheco and one of them fired, George said. The other two fired bean bags. 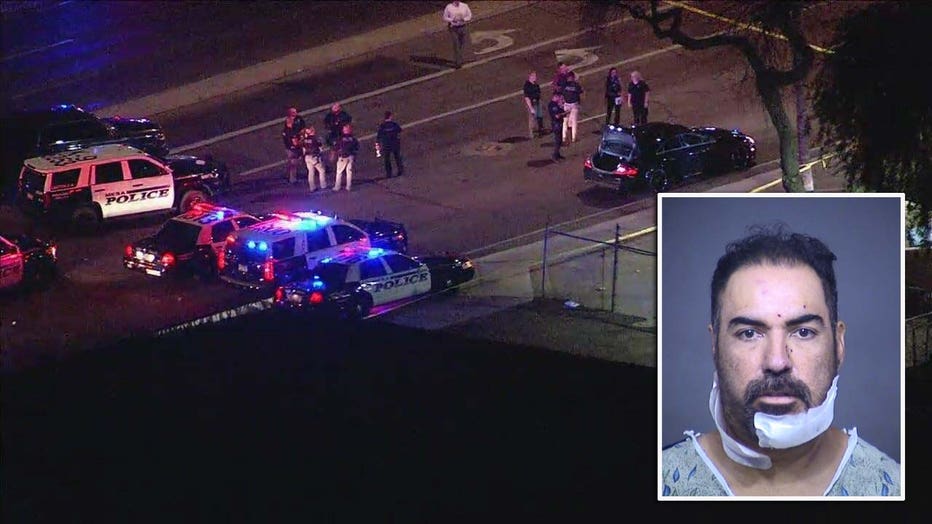 Victor Pacheco, 43, was arrested following an officer-involved shooting in Mesa.

Pacheco was hospitalized before being released and booked into jail.

Police say no officers were hurt.

Surveillance video from the scene is believed to have captured the incident, as well as the officers' body cameras.

Police later executed a search warrant on Pacheco's home and found a small automatic handgun. Police say Pacheco was convicted of an armed robbery in Pima County in 2010 and sentenced to over 10 years in prison, making him a prohibited possessor.

Additionally, police say Pacheco was arrested by Mesa Police in August after he assaulted the mother of his child.

"The childs [sic] mother reported that the defendant smashed her head into the center dash area of her car before punching and slapping her," court documents read. "During that incident the defendant also made statements to the female victim that the only reason she is alive is because they have a child in common."

The child was in the car during the assault.

Fight between a man and his girlfriend ends in him being shot by Mesa Police officers, PD says