On January 1, you are no longer allowed to use your phone while driving in the state of Arizona.

PHOENIX - With the new year comes a new law: using your cell phone while driving will be illegal in Arizona starting Jan. 1.

You can use a Bluetooth device, but it must be hands-free.

If you're using navigation, you cannot hold your phone or smart device in your hand. The only reason to grab your phone is in an emergency.

"This bill will change behavior so that people won't be on their phone, so they won't be texting and change behavior and allow law enforcement latitude to be instructive. The objective here is to not write tickets, it's to save lives," stated Gov. Doug Ducey back in April 2019. 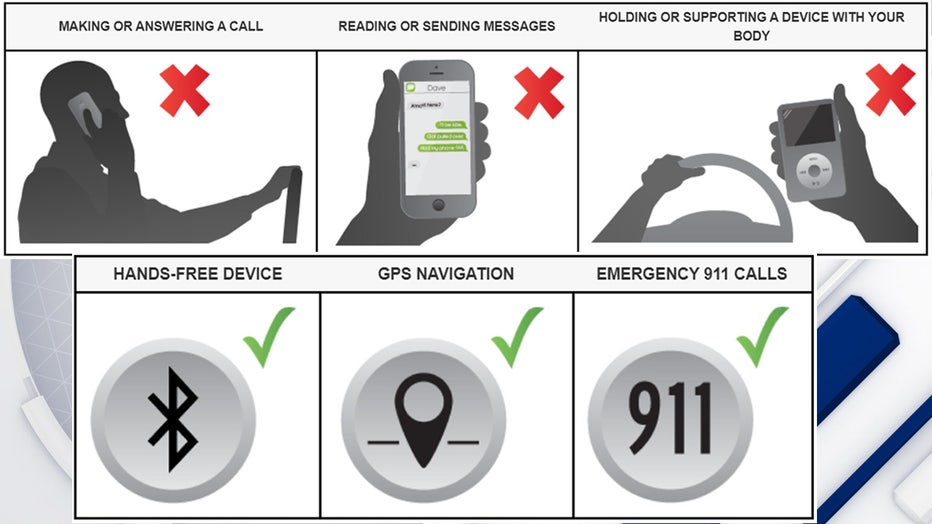 Chart describing what is and isn't against the law when it comes to using electronic devices. (Arizona Dept. of Public Safety)

According to the Arizona Department of Public Safety, you will be allowed to:

Items that will be against the law, while driving:

Drivers breaking the hands-free law will be fined between $75 and $149 for a first violation, and between $150 and $250 for each following violation.

MORE: How to use the 'Do Not Disturb While Driving' feature on Apple devices and on Android devices

Arizona ended a decade of resistance to restrictions on using a cellphone while driving when Gov. Doug Ducey signed a law outlawing holding a phone behind the wheel. It is now the 48th state to ban texting and the 18th to ban hand-held phone use while driving.

"It makes sense to pass a law like this if you look at how accidents happen when you are using a cell phone," said Marc Lamber, a personal injury attorney with Fennemore Craig.

Lamber represents victims and families who have been impacted by this kind of distracted driving and says it's about time the hands-free law will go into effect.

"Once someone makes a mistake by using a cell phone and causing an accident, you can't unring that bell.. it's like a pebble dropping in a pond. It has so far reaching effects on the family, on the person, on your life."

FOX 10's Bailey Miller talks to Marc Lamber, a personal injury attorney with Fennemore Craig about how you can face a hefty fine if you're caught breaking the law.

With New Year's celebrations, Sgt. Maggie Cox of the Phoenix Police Dept. says, "An interesting fact is that a distracted driver is six times more dangerous than an impaired driver, so along with our messages about not to drive impaired, let's not drive distracted."

The Phoenix Police Dept. received a large grant that will help them enforce the new law.