Every appointment was booked within 39 minutes, officials said.

Arizona Gov. Doug Ducey had announced the additional appointments a day prior in an effort to speed up distribution.

"This is part of the state’s ongoing work to speed up the pace of vaccine distribution. These additional appointments will be available to prioritized Arizonans at the new state-run vaccination site at Arizona State University’s Phoenix Municipal Stadium," read a portion of the statement.

According to the statement, groups prioritized to date in Arizona include:

According to a map provided by the Governor's Office, Maricopa and Pinal Counties are not among the counties that are vaccinating those 65 and older as part of the prioritized group.

"Those who receive their first vaccinations at State Farm Stadium or Phoenix Municipal Stadium will have a guaranteed appointment for second doses at the same vaccination site," read a portion of the statement. 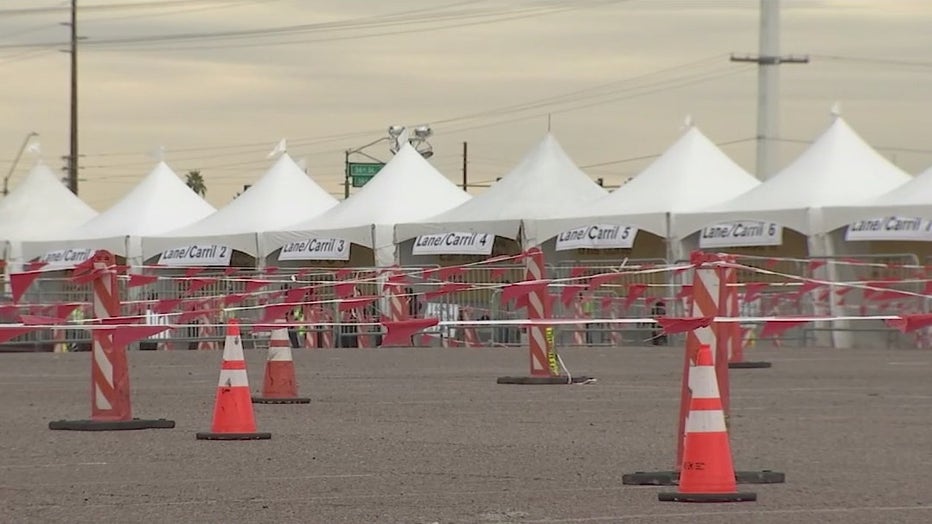 The slots, according to officials, were made available in the aftermath of Gov. Ducey's signing of an executive order, which requires all vaccine providers that have received more than 1,000 doses and had over 40% of those doses remaining unused to submit a plan to the Arizona Department of Health Services.

"Plans submitted by counties and health care providers identified available doses of the Pfizer vaccine and allowed ADHS to open up additional appointments at Phoenix Municipal Stadium," read a portion of the statement.

According to the governor's website, "Information about all the vaccination sites across Arizona can be found at azhealth.gov/findvaccine. Those without computer access or needing extra help registering can call 1-844-542-8201 to be connected with an operator who can assist. Note: You can use the patient portal at podvaccine.azdhs.gov to make an appointment for someone else in a prioritized group, such as someone 65 and older."

Arizona doles out half of vaccine supply

The Arizona Department of Health Services’ daily vaccine report shows the state has given out 59% of its doses, or more than 702,000, so far. But 1.2 million doses were expected to be shipped this week.

Some have criticized the state’s vaccine rollout, citing a confusing online appointment system that officials say is being improved.

Initially, February appointments there were completely booked. But additional doses of the Pfizer vaccine were being sent to the stadium from vaccine providers not using enough of their supply.

The added appointments are from Friday to Feb. 18. Only those in the priority groups are eligible, including health care workers, people over 65, first responders and teachers.

In Arizona, more than 109,000 people have received both injections of the two-dose Pfizer and Moderna vaccines.

Vaccine doses have been thrown out

Officials with Maricopa County say 553 vaccine doses have been thrown out at their five vaccination locations.

News of the new appointment slots comes amid reports that some COVID-19 vaccine doses have been thrown out.

In a statement released on Feb. 2, Maricopa County Public Health officials say no usable doses of COVID-19 is being wasted.

"We have worked closely with our healthcare partners to report to us daily what they consider vaccine waste. That means if there is any concern about the quality of the vaccine or any information is not readable on the label, manufacturers have advised providers to throw out the vaccine in order to maintain a safe operation," read a portion of the statement.

Maricopa County Public Health officials say some examples of why vaccine doses were thrown out include:

"These are common issues that occur anytime vaccines are given, particularly during large-volume operations. Any large vaccine administration site that claims that "no doses are wasted" is not operating safely," read a portion of the statement.

Officials say they have developed multiple layers to avoid waste, including:

Health expert Will Humble says with more than 153,000 vaccine doses already administered in Arizona, a 0.3% waste rate is impressive, as usually, 3% of vaccines at any doctor's office will go to waste.

"That's way better than a pediatrics office," said Humble. "It's not zero, but if you think about the conditions out there, you have a whole bunch of volunteers working eight-hour shifts, and the weather conditions, depending on what kind of day, people will make mistakes."

Humble says it is normal for vaccines to be thrown out, for various reasons.

Meanwhile, state officials say they have not thrown out any doses at its two vaccination locations. However, state officials went on to say that there are instances that may arise, such as manufacturer, shipping, and temperature issues, without giving a number.