Game day energy goes off the charts in Tampa

Winning the NFC Championship means Bucs fans are ready for the home team to play in the Super Bowl in their home town.

TAMPA, Fla. - A ticket to Super Bowl LV is going to cost one of the 14,500 fans invited to the game a pretty penny.

Data provided to Fox Business from TicketIQ showed that the price of a Super Bowl ticket is already beginning to skyrocket with prices ranging between $11,173 and $75,460 as the Tampa Bay Buccaneers are set to be the first team to ever play in a Super Bowl in their home stadium.

The price took off as the Buccaneers were closing out their NFC Championship victory. The cost to get into the game so far was the most expensive since TicketIQ started tracking data in 2010.

As of Sunday night, there were fewer than 400 tickets available on the secondary market.

"These dedicated health care workers continue to put their own lives at risk to serve others, and we owe them our ongoing gratitude," Goodell said. "We hope in a small way that this initiative will inspire our country and recognize these true American heroes. This is also an opportunity to promote the importance of vaccination and appropriate health practices, including wearing masks in public settings." 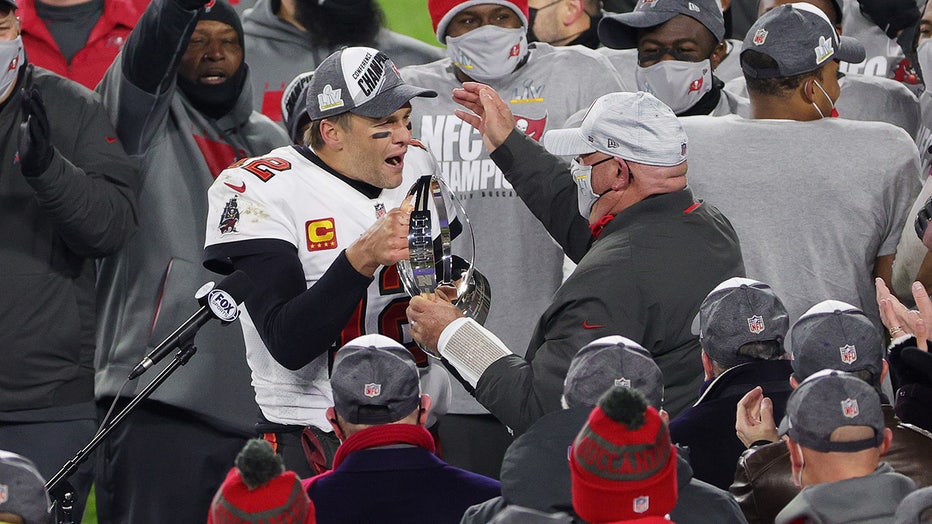 Tom Brady of the Tampa Bay Buccaneers celebrates with head coach Bruce Arians and teammates after their 31 to 26 win over the Green Bay Packers during the NFC Championship game at Lambeau Field on January 24, 2021 in Green Bay, Wisconsin. (Photo by S

There will be 14,500 additional fans allowed to attend the Super Bowl at Raymond James Stadium. The NFL said the protocols for fans attending the game outdoors include mandatory mask-wearing, social-distancing, podded seating, touchless concession stands and other security checkpoints.

"On behalf of Floridians and football fans across the nation, I'd like to thank the many men and women who worked hard to make this game a reality, especially our frontline health care workers who have worked tirelessly over the past year to keep people safe. I look forward to the positive impact this game will have on the Tampa Bay area, and my family and I can't wait for the big game."

Tickets are sure to get more expensive as the game nears.

Super Bowl LV will be played on Feb. 7.

Get updates on this story from FOXBusiness.com