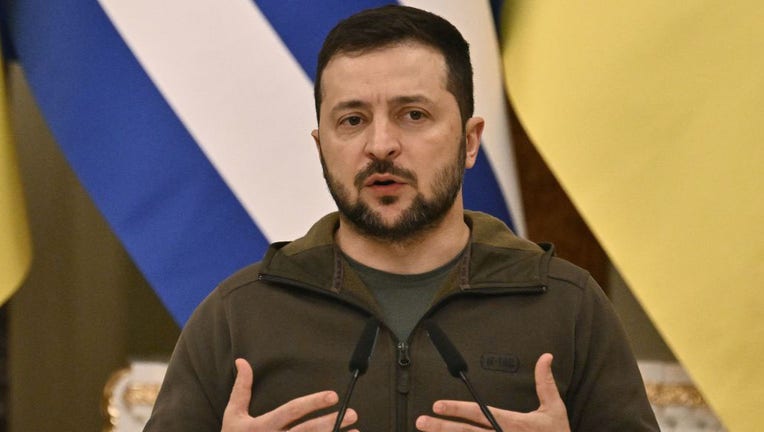 Ukraine's President Volodymyr Zelensky speaks during a joint news conference with Greece's President following their meeting at the Mariinskiy palace in Kyiv on Nov. 3, 2022, amid the Russian invasion of Ukraine. (Photo by GENYA SAVILOV/AFP via Getty

Time Magazine has named Ukrainian President Volodymyr Zelenskyy "and the spirit of Ukraine" as its 2022 Person of the Year.

Since the Russian invasion of Ukraine on Feb. 24, Zelenskyy has become a notable figure worldwide for his leadership of Ukrainian resistance and efforts to bring attention to the months-long war.

Zelenskyy, 44, was one of 10 on Time’s shortlist for the 2022 title, which was revealed on Monday. The title is given annually to a person, group, object, or even an idea that wielded "the most influence in the previous 12 months... for better or for worse."

"Whether one looks at this story of Ukraine with a sense of hope or a sense of fear, and the story is, of course, not fully written yet ... Zelenskyy has really galvanized the world in a way we haven’t seen in decades," Felsenthal said.

Zelenskyy, who grew up in southeastern Ukraine, studied law and later found a new home in movie acting and comedy — rocketing to fame in the 2010s as one of Ukraine’s top entertainers with the TV series "Servant of the People."

In it, he portrayed a lovable high school teacher fed up with corrupt politicians who accidentally becomes president.

After just a few years, Zelenskyy became the real-life president of Ukraine, now rallying his people during unprovoked attacks from Russia, while impressing his Western counterparts.

After an offer from the United States to transport him to safety shortly after the Russian invasion, Zelenskyy famously shot back: "I need ammunition, not a ride," he said in Ukrainian, according to a senior American intelligence official with direct knowledge of the conversation.

Full address: Zelenskyy calls on US Congress for more help -- 'Close the sky'

Ukrainian President Volodymyr Zelenskyy spoke with the U.S. Congress from Kyiv where his country continues to wage war with Russian forces in what officials call an unprovoked attack by President Vladimir Putin. Zelenskyy implored members of Congress to help institute a no-fly zone and continue to enforce additional sanctions until the Russian military stops its assault. After playing a video showing some of the damage in Ukraine, Zelenskyy spoke in English to reiterate how important his request was.

In an essay sharing the magazine’s choice, Time reporter Simon Shuster detailed a trip he took with Zelenskyy last month to Kherson on a private train.

"Zelensky’s success as a wartime leader has relied on the fact that courage is contagious," Shuster wrote. "It spread through Ukraine’s political leadership in the first days of the invasion, as everyone realized the President had stuck around."

Zelenskyy has been compared to historical figures in recent months, including Winston Churchill. But the president "recoils at the suggestion that they have anything in common," Shuster wrote.

"Ukraine’s President would prefer to be associated with other figures of Churchill’s era, like the author George Orwell, or with the great comedian who lampooned Hitler in the middle of the Holocaust," the Time essay states.

"‘I’ve raised the example of Charlie Chaplin,’ Zelensky told me on the train, ‘how he used the weapon of information during the Second World War to fight against fascism. You see, there were these artists who helped society, because they had a lot of admirers, and their influence was often stronger than artillery,’" the essay recounts.

Every year since 1927, Time Magazine has picked a Person of the Year. The list has included U.S. presidents, "The Computer" in 1982, Ebola fighters (2014), and the "Silence Breakers" — or those who shared their stories about sexual assault and harassment in 2017.

Last year, Elon Musk was named Time’s 2021 Person of the Year, prior to his acquisition of Twitter. Musk, who also leads electric carmaker Tesla and rocket company SpaceX, was given the title "for creating solutions to an existential crisis, for embodying the possibilities and the perils of the age of tech titans, for driving society’s most daring and disruptive transformations," Felsenthal wrote at the time.