From detecting drugs and explosives to taking down a suspect, some of the country's top military dogs are getting valuable training right here in the Valley. FOX 10's Brian Webb reports.

PHOENIX - Some of the country's top military dogs are trained at Luke Air Force Base, learning how to do everything from detecting drugs and explosives, to how to take down a suspect.

One of the dogs in training is Enzo. The two-year-old dog was seen sinking his teeth into the decoy's arm, just like what he's being taught to do.

"Its a deterrent," said Staff Sgt. Zachary Boozl. "If you see a dog ready to come get you, you are going to think twice about running and getting your arm torn off."

Enzo is one of around 300 young dogs, mostly Labradors, German Shepards and Mallinois that are trained at Luke AFB every year. The pooches are put through an initial four-month training session.

Or, in case anyone is curious, 28 months in dog time.

For the dogs, all of that time is spent attached at the hip to a handler. For Enzo, it's Staff Sgt. Boozl, who went through hundreds of hours volunteering and training to be here himself.

"It's a learning curve for us and the dogs," said Staff Sgt. Boozl. "As a younger handler, I have a lot to learn.These dogs are smart.  They see every little  bit of issues or quirks that we don't realize."

The dogs arrive after their own kind of k-9 basic training in Texas. In Arizona, the dogs will have to learn a long list of more advanced dos and don'ts --  right from wrong, good and bad.

Enzo has already picked up some new tricks for what's called "Controlled Aggression Tactics", and showing off to a group of high school student visitors. 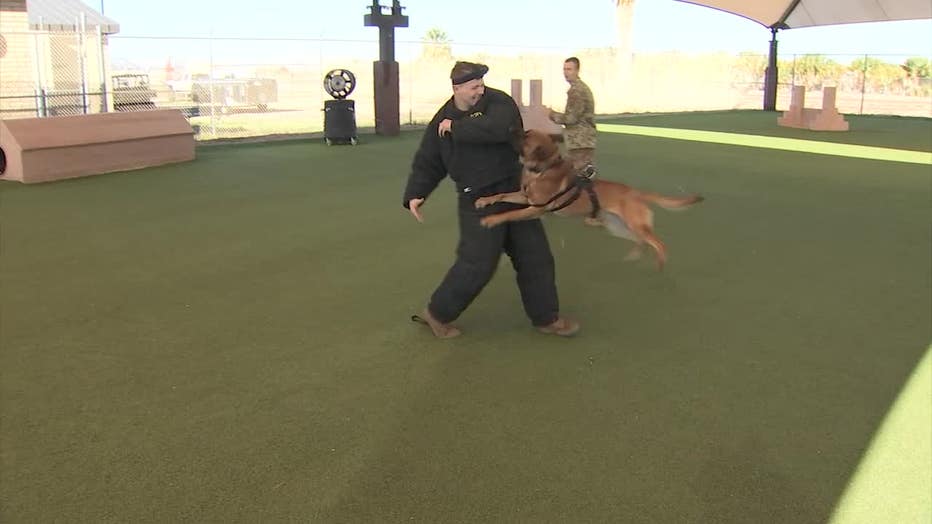 "We don't train to bite certain spots of the body. We don't target any deadly spot like head or neck, but they are trained to bite anywhere," said Tech Sgt. Tyler Hendricks, who is also a kennel master.

These dogs can take on a criminal, but are really taking cues from the handler.

Enzo is only unleashed when his handler says so. When to chase, when to bite and stop biting. Meanwhile, bad guys don't always dress in big puffy suits or act the same way. Enzo has to know what to do in every situation.

This is actually all fun and games for the dogs, with tails wagging along the way, but it is serious business to the military, with their ever-looming duty protecting bases, soldiers and sometimes the President.

"Someone breaks the law and tries to run from our street forces out there, we use our dogs to apprehend that person by biting them," said Tech Sgt. Hendricks.

After following several specific commands, Enzo left the decoy with a new badge of honor, in the form of some well-deserved scratches and bruises, and impressing the crowd with his skills and smarts.

"It's cool that they can train them to do all these things on command," said Kayla Cooper. "When they are born, they don't have that type of skills." 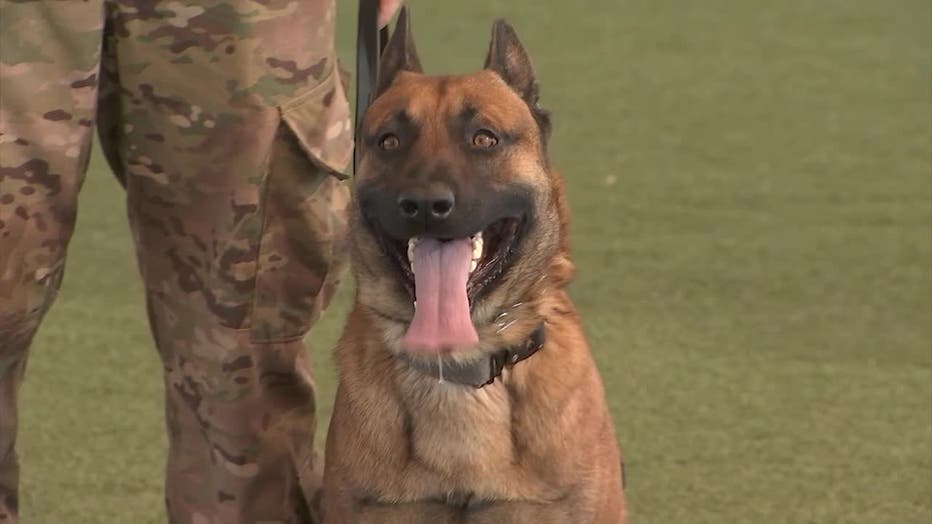 "I thought it was awesome how they do a lot of love and play with them, take care of the dogs and treat them with respect," said Stormy Moralez.

As Enzo works his way to top-dog status, staff Sgt. Boozl's old dog, DC, is set to retire because of medical issues. They served overseas together, and hope to always be together after the adoption process.

Other times, however, dog and handler have to part ways.

"It's a bond that's hard to leave, and you have to appreciate the time you had and the opportunity to do it," said Staff Sgt. Boozl.

So now, it's Enzo turn to earn his stripes and be assigned his own missions -- most likely alongside Staff Sgt. Boozl -- Boots and paws on the ground together, ready to take a bite out of crime, one bad guy at a time.

The Air Force begins each military working dog training at Lacklund Air Force Base in Texas. 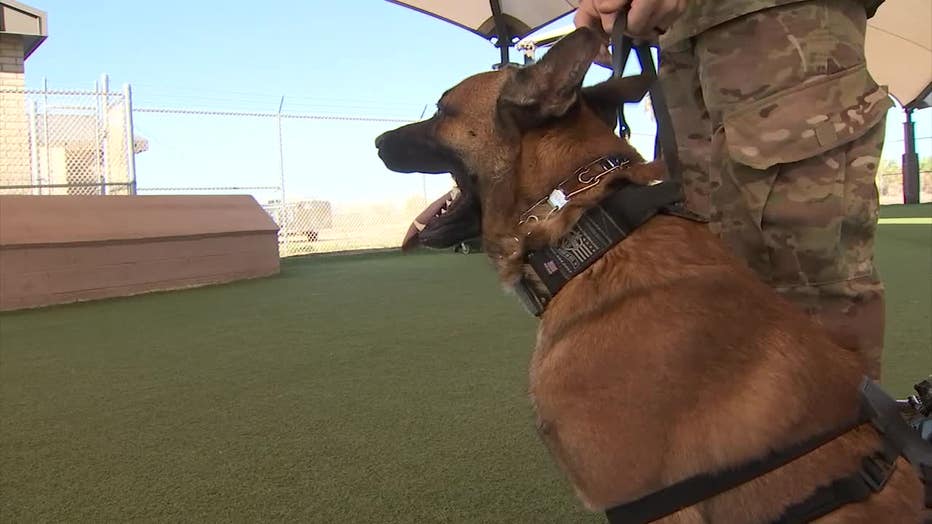