The FOX Corporation announced that it would be donating $1 million to the American Red Cross to help with relief efforts related to deadly tornadoes in Kentucky.

The FOX Corporation is taking part in recovery efforts after tornadoes left a trail of devastation across the Midwest and South last weekend.

"I am proud to announce that our company, Fox Corp., is now donating to The American Red Cross $1 million to help with the efforts and the relief efforts and the rescue and recovery in that region," Doocy said.

Kieserman expressed his gratitude, saying the donation comes at a time when victims need safe shelter, emotional support and other resources.

"Those dollars are going to help people in Kentucky recover," Kieserman said. "There is over 550 people in shelters this morning. They’re displaced from their homes, there are others living in homes that got tarps on them, that’s the only thing protecting them. Thanks to your generosity, and that of so many other donors, we’re going to be sheltering, feeding and comforting folks from all over Kentucky. So thanks to you and FOX very, very much."

More than 30 tornadoes moved through Kentucky and four other states over the weekend, claiming at least 88 lives and leaving many others unaccounted for.

President Joe Biden paid a visit to the area on Wednesday, calling "the scope and scale of this destruction is almost beyond belief." 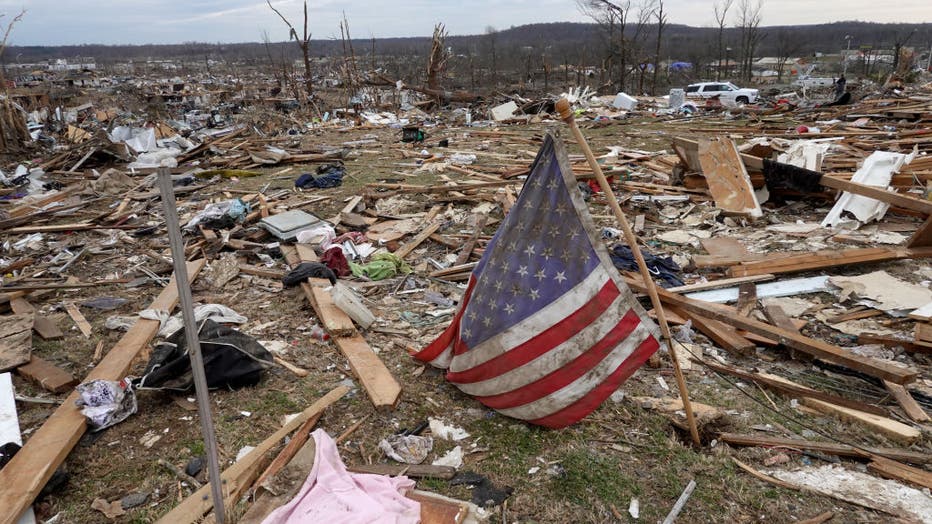 Kieserman described the storm as a "giant walking from Arkansas to Bowling Green, across Western Kentucky, and just crushing everything" in its path.

"We’ve got over 350 Red Cross volunteers on the ground in Kentucky right now, and they’ve come from all over the country to help their neighbors and friends in Kentucky," Kieserman said. "It's going to be a long, long haul."

Doocy then urged any viewers who would also like to help or donate to visit RedCross.org/foxforward.

The American Red Cross is making it easy to send a quick $10 donation simply by texting "REDCROSS" addressed to the number, 90999. Other donations can be made by calling 800-733-2767 or visiting redcross.org online.

RELATED: Tornado relief: How to help victims in Kentucky, other states

The international aid organization CARE and its local partners are helping to provide immediate assistance to tornado victims including food, water and funding to families in need. Those who would like to make a donation to the cause can do so here.

Kentucky Gov. Andy Beshear announced the creation of a tornado relief fund for the western part of the state and also called on people to donate blood, which has been running in short supply during the pandemic.

As of Sunday afternoon, Beshear said the fund totaled more than $2.3 million.

The governor also said people in the affected areas can help by staying off the roads, whenever possible.

Kentucky Gov. Andy Beshear announced the creation of a tornado relief fund for the western part of the state and also called on people to donate blood, which has been running in short supply during the pandemic. The governor said the fund totaled more than $2.3 million, as of Dec. 12.

He added that people in the affected areas can help by staying off the roads, whenever possible.

The Salvation Army has set up a disaster relief fund for the tornado victims. Donations can made here or by calling 800-725-2769. It is also preparing to dispatch mobile kitchens that can serve 500 to 1,500 meals per day to the survivors and first responders in the affected areas.

Samaritan’s Purse, another humanitarian group, said it sent disaster response teams on Saturday to Mayfield, Kentucky, and Monette, Arkansas, while other teams started to head to the devastation in Tennessee and Illinois. A tractor-trailer stocked with tools and equipment departed from Texas, according to the group, with more help on the way from North Carolina when the weather allows. Donations can be made here.

World Vision, a Christian humanitarian group, plans to begin shipping relief supplies to churches in Kentucky beginning Sunday. Besides food and emergency kits, the supplies will include heaters, blankets, solar lights and mini-refrigerators. Donations to help support those efforts can be made here.

This station is owned by the FOX Corporation. This story was reported from Atlanta. Megan Ziegler contributed to this report.