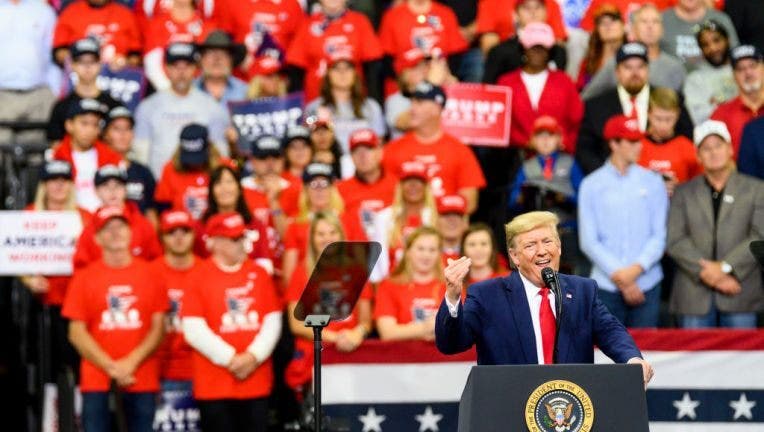 President Donald Trump speaks on stage during a campaign rally at the Target Center on October 10, 2019 in Minneapolis, Minnesota. (Photo by Stephen Maturen/Getty Images)

MINNEAPOLIS - President Trump unloaded on Joe and Hunter Biden over their Ukrainian business dealings in Minneapolis on Thursday evening -- at one point bringing the crowd to its feet by charging that Biden's only useful trait as vice president was his preternatural ability to "kiss Barack Obama's a--."

Trump cited a new report in The Washington Examiner that the whistleblower at the center of Democrats' impeachment push had worked with Biden. The whistleblower's anti-Trump attorney, Mark Zaid, acknowledged earlier in the week that his client had "contact" with current presidential contenders "from both parties."

The president also derided the Biden campaign for aggressively seeking to convince Facebook and The New York Times, as well as all major television networks, not to cover what it called "conspiracy theories" about potential Biden corruption.

Scores of Trump supporters, as well as pro-impeachment demonstrators, lined up hours before the event at the Target Center in downtown Minneapolis began. At least one protester was photographed pouring milk on his face to counter the effects of pepper spray, as chaos unfolded outside the arena -- with pro-Trump hats being lit on fire, as some demonstrators harassed police and assaulted Trump supporters.

A man in a blue jacket seemed to be leaving the Trump rally by himself when he was spotted by a protester who yelled: “There’s a Nazi over here!” A group of protesters then attacked the man, slapping and pushing him. He finally ran away.

"The Bidens got rich -- and that is substantiated -- while America got robbed," Trump said. "Sleepy Joe and his friends sold out America. ... And in a brand new report, just came out as I'm walking on the stage, it turns out that when Joe Biden was vice president -- he worked with the so-called whistleblower.  This is nothing more than a partisan witch hunt, sabotage, and I'm sure they're going to say, 'totally unsubstantiated.'"

As the crowd erupted into applause, Trump remarked, "Isn't it much better when I go off script? So much better."

Trump set a fiery tone within minutes of taking the stage, as he relentlessly mocked ex-FBI officials and lovers Peter Strzok and Lisa Page with a passionate dramatic reading of their anti-Trump text messages. He also touted the country's economy and suggested the U.S. will prevail in its trade war with China -- without mentioning the growing issue of censorship in the U.S. over ongoing pro-democracy protests in Hong Kong.

The rally, Trump's first since the House moved toward impeachment over his handling of a July phone call with Ukraine's president, was in a state Trump nearly won in 2016 and has talked frequently of capturing in 2020. But, it took place in a traditionally liberal city and the home turf of a frequent foil, Rep. Ilhan Omar.

To loud booing during the rally, Trump slammed the Democrat as "an America-hating socialist" who "minimized the September 11 terror attack on our homeland." He also outlined comments from Omar that even top Democrats have admitted were anti-Semitic, before asking, "How do you have such a person representing you in Minnesota? I'm very angry at you people. She is a disgrace to our country, and she is one of the big reasons that I am going to win, and that the Republican Party is going to win, Minnesota in 13 months."

A chant of "four more years" broke out -- in sharp contrast to the "send her back" rallying cry from a July rally in North Carolina that was directed at Omar. Trump later condemned that chant, which came after the president asked why unnamed "Democrat Congresswomen" didn't "go back and help fix the totally broken and crime infested places from which they came, then come back and show us how it is done."

Trump hit Democrats for bringing in too many refugees without proper security controls, noting that he has "reduced refugee resettlement by 85 percent" since taking office. The president thanked Mexico for agreeing to deploy its soldiers to help curtail illegal immigration at the border pursuant to a deal the White House struck earlier this year -- a move that Trump said would help avert a humanitarian crisis like the one unfolding in Europe.

Later in the rally, Trump explained his decision to expose U.S.-allied Kurds to Turkish invasion by telling the crowd how difficult it was to inform the families of fallen U.S. servicemembers how "their child has died." Keeping troops on guard to prevent Turkish incursion, Trump said, was an unnecessary risk of U.S. personnel.

"I have to sign these letters," Trump said, saying it also was "very tough" to go to Dover Air Force Base to "meet the parents and families and wives and children, sisters and brothers" of fallen soldiers who arrive in coffins.

Before the president took the stage, his son Eric Trump briefly encouraged a "lock him up" chant directed at Joe and Hunter Biden, before telling the crowd it wouldn't be necessary because Biden will lose his bid for the White House.

"How do you have such a person representing you in Minnesota? I'm very angry at you people."

"That should be the end of it," Trump told rallygoers. "We released a transcript of that call, which was so good that Crooked [House Intelligence Committee Chairman] Adam Schiff had to make up a fake conversation that never happened, and he delivered it to the United States Congress and the American people. It was a total fraud. And then, [House Speaker] Nancy Pelosi said, 'Oh, I think the president said that.' These people are sick."

Trump argued that Democrats never anticipated he would release a full transcript of his call with Zelensky, and recklessly locked themselves into their impeachment inquiry before they even read the document.

"Where's Hunter?" Trump asked rallygoers at one point, referring to Biden's son. Both Joe and Hunter Biden mostly have avoided taking questions about their Ukraine dealings in recent days.

The president then launched into a mock interview with Hunter, whom Trump called "not too smart."

Critics have alleged Hunter -- who secured a lucrative role on the board of Ukrainian natural gas company Burisma Holdings while his father was vice president -- might have been selling access to his father, who had pushed Ukraine to increase its natural-gas production.

Police removed protesters throughout the rally, which went ahead as scheduled even after Trump's campaign threatened a lawsuit over the city's effort to recover $530,000 in security costs relating to the event.

The dispute over the rally's security costs erupted late Monday when the campaign accused Mayor Jacob Frey, a Trump critic, of trying to sink the rally. Frey called the costs reasonable and said he had a duty to protect taxpayers.

The campaign said the city sent the security cost estimate to Target Center's operator, AEG Management, which threatened to cancel its contract to host the rally if the costs weren't covered. Its law firm threatened to sue AEG if the rally doesn't proceed.

His campaign said the "bogus security charges" are an attempt to prevent Minneapolis residents from supporting Trump, and contrasted them with what they said were much smaller charges for a 2009 event by then-President Barack Obama in the same building.

"The radical leftist mayor of Minneapolis, Jacob Frey, is abusing the power of his office and attempting to extort President Trump's re-election campaign," Trump's campaign said in a statement.

When the rally was announced last month, Frey said Trump's "message of hatred" would never be welcome in Minnesota. But, at a news conference Tuesday, he said the city will do all it can to guarantee a "safe and peaceful week," regardless of his political differences with Trump.

Frey stood by the security-cost estimate, saying a Trump political rally would bring "significant expenses" not associated with Obama's 2009 event, which was aimed at building support for health-care reform.

Later Tuesday, the Trump campaign said in a statement that the operators of Target Center had backed off canceling the contract, with no agreement by the campaign to pay additional money.

Trump also attacked Frey over Twitter for a policy prohibiting city police officers from wearing their uniforms in support of candidates at political events or in campaign ads. A spokesman for the city's police union has complained about the policy, and the union has been selling "Cops for Trump" T-shirts.

Frey said the police force must be nonpartisan and non-ideological.

"They're free to express their First Amendment rights but should do so off-duty," he said.

FOX News' Chad Pergram and The Associated Press contributed to this report.

Get updates at FOXNews.com.