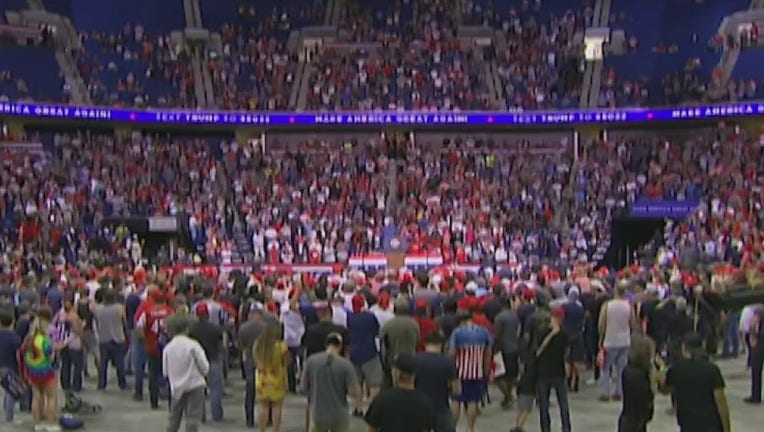 After top Democrats gloated that teenage activists had sabotaged turnout at President Trump’s Tulsa, Okla., rally on Saturday, the Trump campaign fired back within hours, saying that media organizations are complicit in spreading false narratives about the event -- and that protesters and the coronavirus were the real culprits.

Rep. Alexandria Ocasio-Cortez, D-N.Y., specifically asserted that teenagers allegedly reserved scores of tickets for the Tulsa event online – then failed to show up, thus preventing others from being able to attend. "Actually you just got ROCKED by teens on TikTok,” Ocasio-Cortez wrote to Trump campaign manager Brad Parscale, referring to a popular Chinese video-sharing social media application.

A spokesperson for the Tulsa Fire Department told Fox News on Sunday that fire marshal records show just under 6,200 scanned tickets were logged for the rally at the BOK Center. The figure doesn't include Trump team staff members or private suites, which were fully booked. The president and his campaign had touted 1 million ticket requests; the arena's capacity is 19,000.

Parscale, on Sunday, countered by explaining the campaign's process for screening out false ticket requests, which was implemented after activists made similar efforts to derail previous rallies.

“Leftists and online trolls doing a victory lap, thinking they somehow impacted rally attendance, don’t know what they’re talking about or how our rallies work," Parscale said. "Reporters who wrote gleefully about TikTok and K-Pop [Korean pop music] fans -- without contacting the campaign for comment -- behaved unprofessionally and were willing dupes to the charade."

Parscale continued: "Registering for a rally means you’ve RSVPed with a cellphone number and we constantly weed out bogus numbers, as we did with tens of thousands at the Tulsa rally, in calculating our possible attendee pool. These phony ticket requests never factor into our thinking. What makes this lame attempt at hacking our events even more foolish is the fact that every rally is general admission -- entry is on a first-come-first-served basis and prior registration is not required."

The real reason for the unusually depressed turnout was apparent, the campaign said, noting that a high number of people viewed the rally online.

"The fact is that a week’s worth of the fake news media warning people away from the rally because of COVID and protesters, coupled with recent images of American cities on fire, had a real impact on people bringing their families and children to the rally," Parscale said.  "MSNBC was among outlets reporting that protesters even blocked entrances to the rally at times. For the media to now celebrate the fear that they helped create is disgusting, but typical. And it makes us wonder why we bother credentialing media for events when they don’t do their full jobs as professionals.”

Some commentators noted that, if Ocasio-Cortez's claims about TikTok were true, they would represent unprecedented foreign-based election interference that Democrats would ordinarily claim to oppose. TikTok is owned by the Beijing-based technology company ByteDance.

"One of the tactics used by Russia to meddle was the use of social media to manipulate public perception," wrote Tim Pool. "This is a Chinese app facilitating the largest most impactful election meddling we have seen yet, assuming its true How much of Trump's campaign was flooded with bunk data?"

Despite media reports, including a heavily opinionated piece at The New York Times, there is no clear evidence that social media users affected the rally.

"The article doesn’t even provide any evidence, it just says a bunch of teenagers said they ruined the rally and the reporter/editors at the Times took their word for it," said The Washington Examiner's Joe Gabriel Simonson, referring to the Times' front-page piece on the rally. "Diminishing standards."

The Times article, co-written by anti-Trump author Maggie Haberman, goes on to bizarrely state that it is "false" for Trump blame "left-wing radicals” for "rioting in cities across the country."

The Times' piece, which resembles an editorial at several points, further incorrectly states that Trump was attacking "attempts to remove Confederate monuments" through legal and political means that enjoy some bipartisan support.

Meanwhile, more neutral observers offered their own assessments of the rally.

"The campaign made a strategic mistake holding a rally in a venue this big in a state with a smaller population when you have to overcome attendance issues due to a pandemic," observed journalist Yashar Ali. "He should have held this rally in a state where he had a bigger pool of supporters to pull from." Ali also faulted the Trump campaign for saying attendance would be massive.

"Think about it," he wrote. "If you intend to go to a rally for a candidate of your choice but you keep hearing that 800,000 people have reserved tickets (forget that many were fake reservations - that news didn't reach most people), would you still want to go? 800,000 for 19,000 capacity?"

Indeed, some Trump supporters told Fox News that news reports of expected high turnout had discouraged them from attending.

"I tried all week to get tickets to the Trump Rally and couldn't get the campaign to respond to my applications. I lived within minutes of Tulsa," Jackie York of Okemah, Okla., told Fox News via email. "When they started showing evening news clips showing people camping outside for rally, I decided not to fight the 'hundreds of thousands' of people I assumed would be fighting to go in.  We had no tickets.  My pastor also wanted to go, but couldn’t get tickets online.  We are sad today to have missed [the] opportunity."