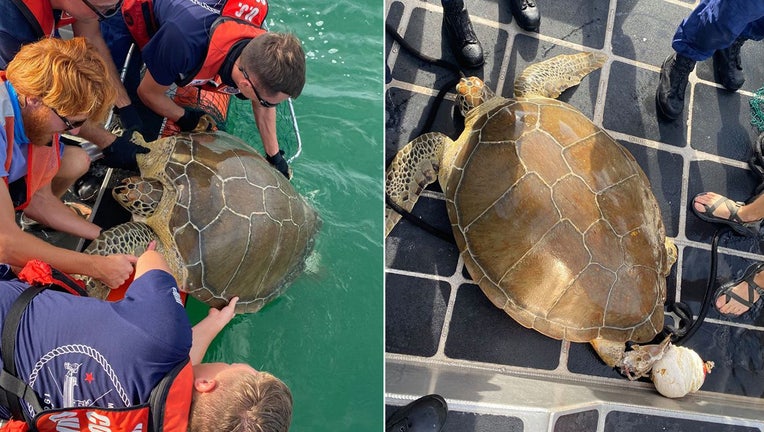 KEY WEST, Fla. - An entangled sea turtle was attached to crab pots for an unknown amount of time off the coast of Long Key. Luckily, the U.S. Coast Guard came to its rescue.

On Thursday afternoon, the Marathon Turtle Hospital alerted the Coast Guard to the injured sea turtle, located about one nautical mile southwest of Long Key. A crew was launched, and soon they found the endangered turtle, which had cuts to its back left flipper.

Crew members managed to untangle the sea turtle from the crab pots and it was taken to shore, where staff members of the Marathon Turtle Hospital took it to their facility.

The turtle will be rehabilitated and eventually returned back to sea.

According to Florida wildlife officials, in events like this, discarded fishing lines or gear could have devastating effects for marine life.

"Lost and abandoned traps have been identified as a problem in Florida's marine environment. Once lost or abandoned, they may "ghost fish" (continue to trap marine organisms until traps degrade enough to allow escape), visually pollute, may cause damage to sensitive habitats, and also become hazards to navigation," according to the Florida Fish and Wildlife Conservation Commission.

To learn more about their Derelict Trap Retrieval and Debris Removal Program, head over to FWC's website.