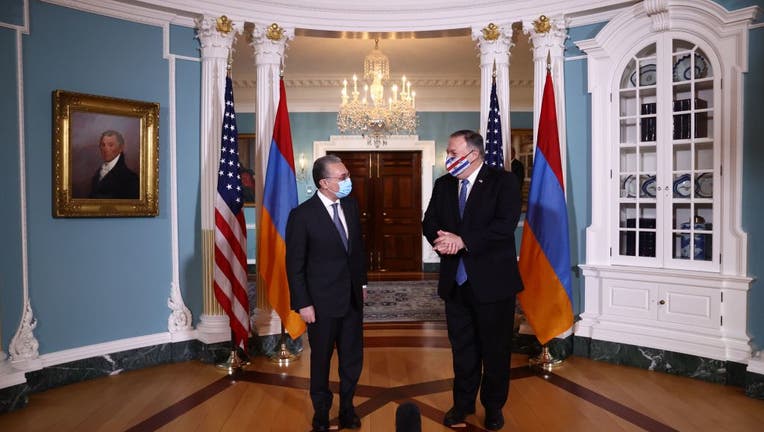 Armenian Foreign Minister Zohrab Mnatsakanyan (L) meets with US Secretary of State Mike Pompeo to discuss the conflict in Nagorno-Karabakh, at the State Department in Washington, DC, on October 23, 2020. (Photo by HANNAH MCKAY / POOL / AFP) (Photo by

WASHINGTON - The Trump administration waded cautiously Friday into international efforts to halt fighting between Armenia and Azerbaijan, which are engaged in their worst conflict in more than 25 years.

Secretary of State Mike Pompeo met separately in Washington with the foreign ministers of Armenia and Azerbaijan in a bid to promote a ceasefire in hostilities over the region of Artsakh, also known as Nagorno-Karabakh. The State Department said Pompeo had emphasized to Armenian Foreign Minister Zohrab Mnatsakanyan and Azerbaijani Foreign Minister Jeyhun Bayramov the need “to end the violence and protect civilians.”

“Both must implement a ceasefire and return to substantive negotiations,” Pompeo said in a tweet after his talks.

Friday’s meetings followed failed Russian-led attempts to broker a truce and lower-profile U.S. intervention to promote an end to the fighting. U.S. officials, including Pompeo’s deputy, Stephen Biegun, have appealed for the countries to return to a dialogue over the territory.

Meanwhile, heavy fighting raged over Artsakh as discussions in Washington were taking place. 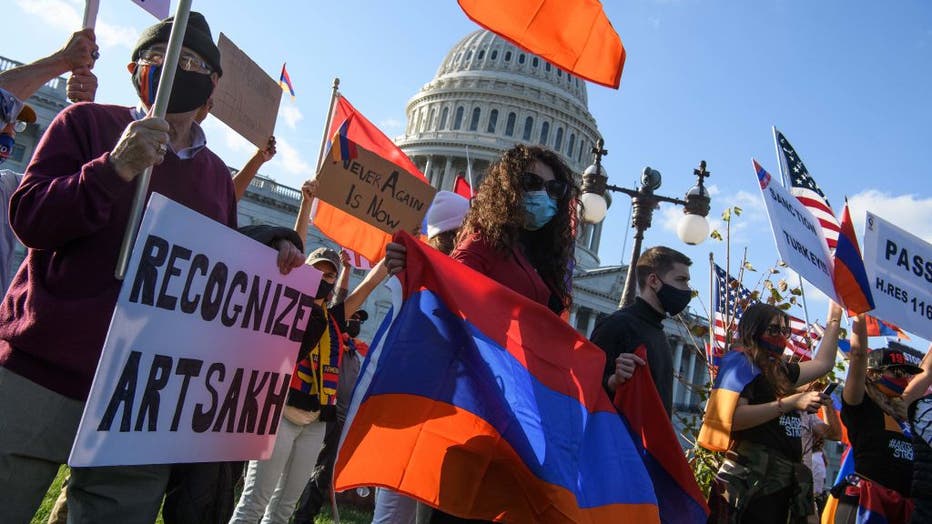 Armenian-Americans hold signs and flags as they protest against the conflict between Azerbaijan and the Armenian enclave of Nagorno-Karabakh and Turkey's support for Azerbaijan in front of the US Capitol in Washington, DC, on October 15, 2020. (Photo

Human Rights Watch reported Friday that Azerbaijan is continuing to use illegal and banned cluster bombs and munitions in residential areas of Artsakh.

President Trump commented on the situation and promised to help Armenians.

“We are talking about it, we are working with Armenia. We have a very good relationship with Armenians, very good people, they are so dedicated they’re incredible people, we will see what happens,” President Trump stated.

“I don’t wanna say. But we will see what happens, I think really good progress is being made with respect to that. We have a lot of people living in this country from Armenia, originally from Armenia, and we are going to help them,” he added.

Meanwhile in Los Angeles, Mercury Public Affairs firm has terminated its multi-million dollar contract with the Turkish Embassy following days of protests on Wilshire Boulevard and online activism by the Armenian-American community.

DLA Piper and Livingston Group have also terminated their contracts with Azerbaijan.

Several US political figures are calling for peace and recognition of Artsakh.

"I believe that U.S. foreign policy must prioritize peace, human rights, and global security. Azerbaijan's aggression in Armenia is the antithesis of these values, which is why I cosponsored H.Res.1165, condemning the recent attacks." stated Rep. Katie Porter.

Rep. Adam Schiff, who represents California’s 28th congressional district and serves as chairman of the House Intelligence Committee, has called on the US to formally recognize the Independent Republic of Artsakh.

“The United States will not stand idly by as Azerbaijan and Turkey wage war on Artsakh, killing hundreds of soldiers and civilians, and displacing tens of thousands. I stand with Artsakh,” Rep. Schiff stated.

Russian President Vladimir Putin said Thursday that Moscow’s information indicated that the combined death toll from the nearly four weeks of fighting was approaching 5,000, a significantly higher number than officially reported by the warring parties.

Russia, along with the United States, has co-chaired the so-called Minsk Group set up by the Organization for Security and Cooperation in Europe to mediate in the conflict.

In his meetings, Pompeo “also stressed the importance of the sides entering substantive negotiations under the auspices of the OSCE Minsk Group Co-Chairs to resolve the conflict based on the Helsinki Final Act principles of the non-use or threat of force, territorial integrity, and the equal rights and self-determination of peoples,” the State Department said.

RELATED: Continuing coverage of the conflict between Armenia and Azerbaijan

Putin said Russia is doing its best to negotiate a lasting truce. He voiced hope that the United States would work cooperatively to help end hostilities and mediate a political settlement.

Turkey has thrown its weight behind Azerbaijan, vowing to support its longtime ally “on the battlefield or the negotiating table.” It has trained Azerbaijani military and provided it with strike drones and long-range rocket systems that gave Azerbaijan a strong edge on the battlefield.

Associated Press contributed to this report