Deal reached in Airbus-Boeing trade dispute between US, EU

The U.S. and European Union reached a deal to end a battle over subsidies to rival plane makers Boeing and Airbus, a dispute dating back to 2004.

BRUSSELS - The deal the United States and the European Union reached Tuesday to end their long-running dispute over subsidies to Boeing and Airbus will mean the phase-out of billions in punitive tariffs. It will ease trans-Atlantic tensions. And it will allow the two sides to focus on a common economic threat: China.

But the breakthrough leaves other trade frictions between the U.S. and the EU unresolved. Most prominently, the import taxes that President Donald Trump imposed on European steel and aluminum three years ago have been left in place by President Joe Biden. Whether progress on that vexing issue can be resolved soon remains unclear.

But on the Boeing-Airbus dispute, U.S. Trade Representative Katherine Tai said the two sides have come to terms on a five-year agreement to suspend the tariffs at the center of the conflict. Tai cautioned, though, that the tariffs could be re-imposed if U.S. companies aren't able to "compete fairly" with those in Europe.

"Today’s announcement resolves a long-standing irritant in the U.S.-EU relationship," Tai said, as Biden met with EU leaders in Brussels. "Instead of fighting with one of our closest allies, we are finally coming together against a common threat."

The deal brings a fresh dose of international goodwill for Biden as he heads into a potentially thorny summit on Wednesday with Russian President Vladimir Putin. It's also good news for an airlines sector that has been ravaged by coronavirus travel restrictions. 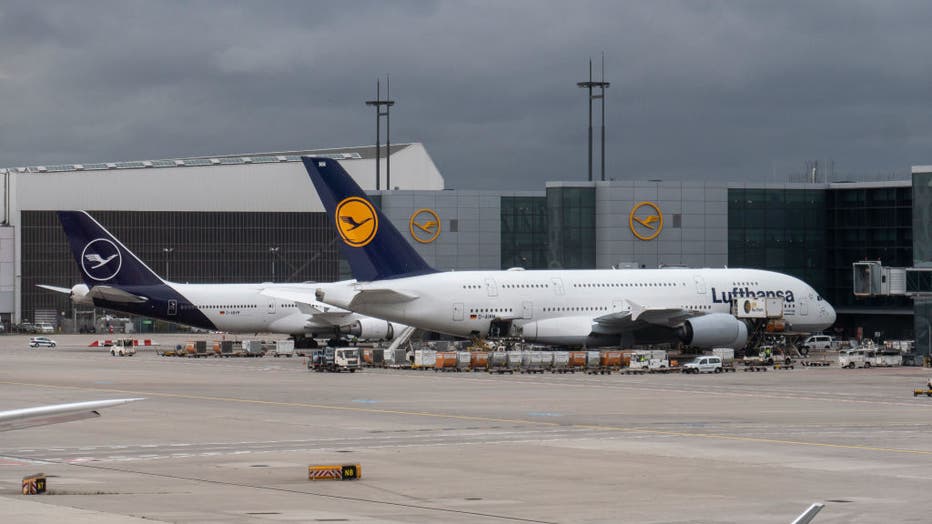 FILE - A Lufthansa Airbus A380 double-decker aircraft as seen next to a Boeing 747 in Frankfurt FRA airport docked at the gates on March 12, 2020, in Frankfurt, Germany. (Photo by Nicolas Economou/NurPhoto via Getty Images)

The trade dispute skyrocketed under the Trump administration, and saw tit-for-tat duties slapped on a range of companies that have nothing to do with aircraft production, from French winemakers to German cookie bakers in Europe and U.S. spirits producers in the United States, among many others.

The U.S. imposed what could have amounted to $7.5 billion in tariffs on European exports in 2019 after the World Trade Organization ruled that the EU had not complied with its rulings on subsidies for Airbus, which is based in France. The EU retaliated last November with up to $4 billion in punitive duties after the WTO ruled that the U.S. had provided illegal subsidies to Seattle-based Boeing.

In March, weeks after Biden had taken office, the two sides agreed to suspend the tariffs. That suspension started on March 11 for four months. The new agreement will officially go into effect on July 11.

"This really opens a new chapter in our relationship because we move from litigation to cooperation on aircraft — after 17 years of dispute," said European Commission President Ursula von der Leyen. "It is the longest trade dispute in the history of the WTO."

Both sides said they would also work together to analyze and address the "non-market practices of third parties that may harm our large civil aircraft sectors," according to the EU's executive branch.

Tai said they would cooperate "to challenge and counter China’s non-market practices in this sector in specific ways that reflect our standards for fair competition. "

Airbus, which is headquartered in France but also has centers in Germany and Spain, welcomed the agreement.

"This will provide the basis to create a level playing field which we have advocated for since the start of this dispute. It will also avoid lose-lose tariffs that are only adding to the many challenges that our industry faces," an Airbus spokesperson said in a statement.

"We are now going to be able to focus on finally putting these differences behind us, and to define the conditions for fair competition on a global scale to support the aerospace sector, which is strategic for both Europe and the United States," they said in a joint statement.

German Economy Minister Peter Altmaier described it as "an important signal for trans-Atlantic cooperation and the new beginning in trans-Atlantic relations."

"We need fewer, and not more, tariffs, because tariffs ultimately cause damage on both sides of the Atlantic," Altmaier said in a statement. "Today’s agreement is above all a great relief for the German exporters that had special tariffs imposed."

Despite the breakthrough, the deal does not end the Trump-era trans-Atlantic trade row. The former U.S. president also slapped duties on EU steel and aluminum. That move enraged European countries, most of them NATO allies, because it was justified as a measure to protect U.S. national security.

The so-called Section 232 proceeding both hurts European producers and raises the cost of steel for American companies. The EU retaliated by raising tariffs on products like U.S.-made motorcycles, bourbon, peanut butter and jeans.

But von der Leyen said that to secure progress on Airbus-Boeing, the EU agreed to hold fire for six months on a set of steel and aluminum-related counter measures it could have imposed just before this summit. She expressed cautious optimism that a deal could be reached here too by year's end.

AP writers Samuel Petrequin in Brussels, Jamey Keaten in Geneva and Paul Wiseman in Washington contributed to this report.