'Please do not shoot us,' victim pleads for life during home invasion

Authorities continue to search for the burglar suspect who tied up two people inside a Forsyth County home in the early morning hours on Feb. 3, 2022.

FORSYTH COUNTY, Ga. - It was a heart-stopping moment for one Forsyth County couple after they say they were robbed and tied up by a masked gunman.

"We were both begging him please do not shoot us," said the female victim. She and her boyfriend didn't want to be identified as the man responsible is still out there.

It was a desperate plea to stay alive after a woman says she and her boyfriend had a terrifying wake-up call.

It happened inside a Forsyth County home early Thursday morning. 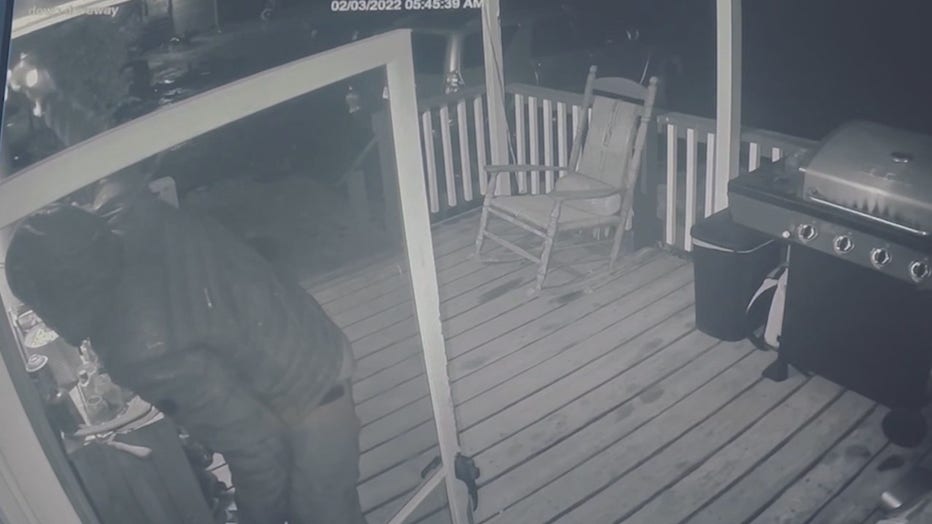 A surveillance camera caught the moments the intruder first came on their property. The video shows the masked man peeking around the door and lifting his mask for a better look inside.

"He held a gun to my head to make me tie my boyfriend's hands up, and I basically tied it like a shoelace. Then he made me put my hands behind my back and tied my hands up like a zip tie fashion," the woman said.

She said the masked man got away with over $6,000 in gold and cash and says he has visible tattoos on his neck and eyes.

"It was so scary. I thought we were going to be shot," the woman said.

Investigators with the Forsyth County Sheriff's Office say they have identified a possible suspect in the case and believe the victims were targeted by someone who had knowledge of the home.

"Violent crimes like this one are rare in Forsyth County and will not be tolerated. Our deputies and detectives work tirelessly to identify and apprehend offenders who commit them. This individual’s days of freedom are numbered no matter where he may run to," Sheriff Ron Freeman said in a statement.

If you know anything about this incident, please contact the Forsyth County Sheriff’s Office.