Man douses Pride Flag with lighter fluid, sets it on fire in Lansing

Lansing Police are searching for a man who doused a Pride Flag with lighter fluid and set it on fire on one of the last days of Pride month.

LANSIN, Mich. (FOX 2) - The Lansing Police Department is asking for help to find a man who doused a Pride Flag with some kind of flammable liquid and then set it on fire as Pride Month came to an end.

According to police, in the early hours of Tuesday, June 28, a man wearing a baseball hat set the flag on fire after dousing it in some kind of flammable liquid.

The flag was on display next to an American flag on a sign that reads ‘Growing in Community’ on Michigan Ave when he walked up, shook what looked like lighter fluid onto the flag, and then ignited it from the bottom. The pride flag burst into flames, nearly setting him on fire.

The man then casually walked away as the fire burned wildly behind him. 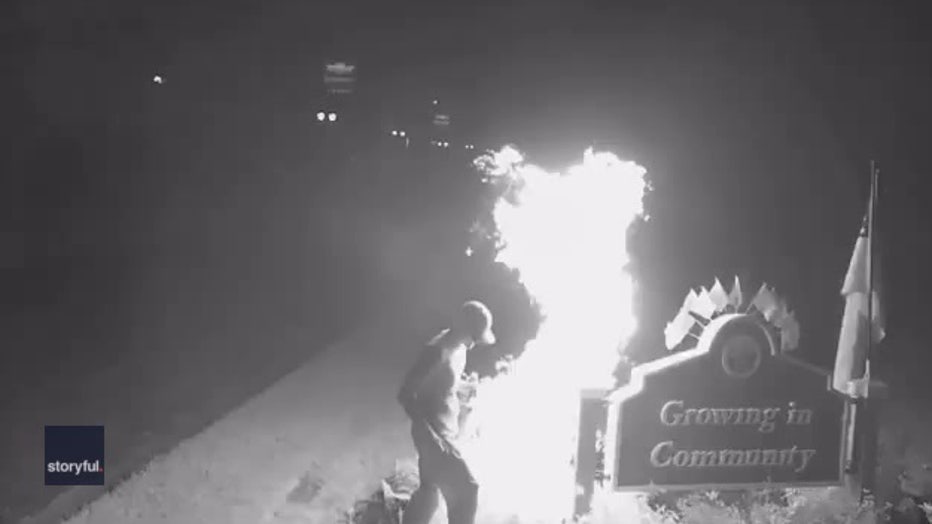 A man is wanted for setting a Pride Flag on fire in Lansing and it was caught on video. Credit: Monica Wright via Storyful

The arson was caught on video on a trail camera set up by Monica Wright.

Wright told Storyful she had attached a trail camera to a municipal light pole to watch over the flag in the middle of the night. She said the destruction had been an ongoing issue throughout Pride Month this year.

"Several of the flags have been sawed off, and the torching of the flag was something that we knew could happen, but never thought we would see," Wright said.

Witnesses said the man was white and was wearing all black when he ran from the scene.

WLNS reports this is at least the fifth time that a Pride Flag has been destroyed in the city.