GRANTS PASS, Ore. - Authorities in Oregon warned of the dangers of black ice this week after a police car was slammed into by a sliding SUV on the highway.

The incident was reported at about 10 a.m. local time on Monday near the city of Grants Pass, located about 30 miles northwest of Medford. Oregon State Police said a lieutenant, identified as Lt. Benson, was on patrol and helping drivers on the snow-covered roads.

Benson had just finished investigating a slide-off crash when another happened a short distance behind him.

"Lt. Benson backed up on the road and exited his vehicle when a third vehicle spun out and hit his patrol car," the Oregon State Police wrote in a Facebook post that accompanied a dashcam video of the crash. "He saw the vehicle coming and was able to run to a safe area."

Snow and frigid temperatures have hit the Pacific Northwest this week, compounding problems for a region more accustomed to winter rain than arctic blasts. The Oregon State Police added a reminder that roadways "may look clear, but don’t be fooled the temperatures are still freezing, and black ice is lurking in the shadows."

"These drivers were all driving too fast for the road conditions," it added. 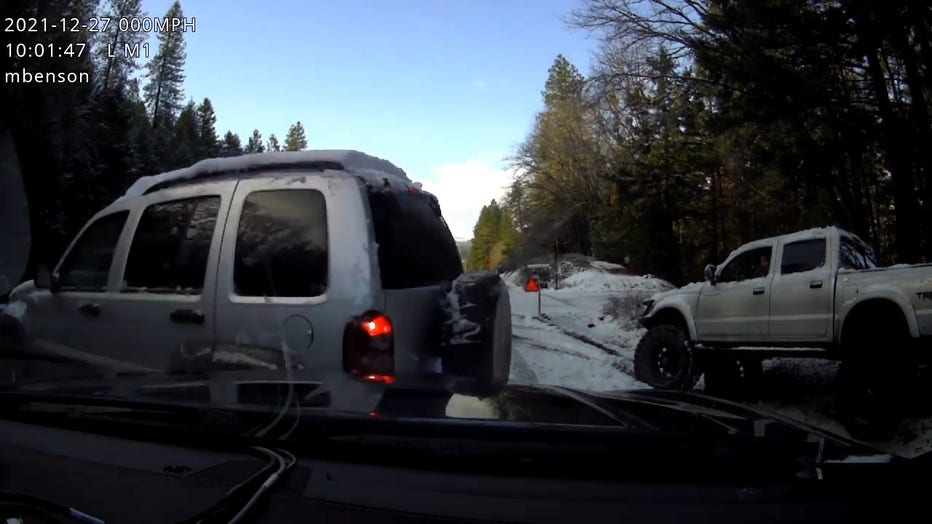 Black ice, given the name because it tends to look like the rest of the pavement on the road, can be particularly dangerous since it's hard to see in advance. It forms on roads, sidewalks and driveways because of light freezing rain or the melting and re-freezing of snow or water, according to the U.S. Forest Service.

It’s most common at night or in the early morning when the temperatures are at their lowest — or when the sun isn't around to warm the roads, the agency said.

"If you are driving and see cars suddenly swerve for no apparent reason, black ice is a likely cause," the U.S. Forest Service warned.