Video of a mysterious group of lights in the sky captured off North Carolina’s Outer Banks by a man visiting the area has gone viral on Youtube, sparking the classic debate: Was it aliens, or the military?

OUTER BANKS, N.C. - Video of a mysterious group of lights in the sky captured off North Carolina’s Outer Banks by a man visiting the area has gone viral on Youtube, sparking the classic debate: Was it aliens, or the military?

The video entitled “real UFO sighting,” was originally posted to the Youtube account of Williams Guy on Sept. 28 and shows what appears to be 14 glowing lights hovering motionless above the water.

The 30-second video shows Guy filming an empty ocean and sky on a boat with the lights out of frame saying, “Look, nothing in the sky at all, then all of a sudden...” Guy then turns the camera to the glowing orbs that don’t appear to be moving at all.

“Anybody tell me what that is?” Guy continues in the video, as onlookers can be heard in the background giving off sounds of shock and amazement at the spectacle.

“I am pretty sure I know what those lights are," Derrick Chennault, who identified himself as a former Marine based at the 2nd Marine Air Wing in Cherry Point, North Carolina, commented on the video. The base is roughly 125 miles west of the Outer Banks.

“We used to regularly drop flares out of the back of our plane in the evenings for military exercises in that area,“ wrote Chennault. "They are one million candle power each so they were pretty bright and can be seen from far away and floated down slow as they hung from a parachute.“

While the Marine Corps Air Station is nearby and military testing is a common occurrence in the area, a spokesperson from Seymour Johnson Air Force Base located 77 miles northeast of Cherry Point confirmed that no aircraft from the Air Force base were in the area the day the video was posted.

The video has now amassed 371,600 views and the debate rages on as to what exactly the lights were. 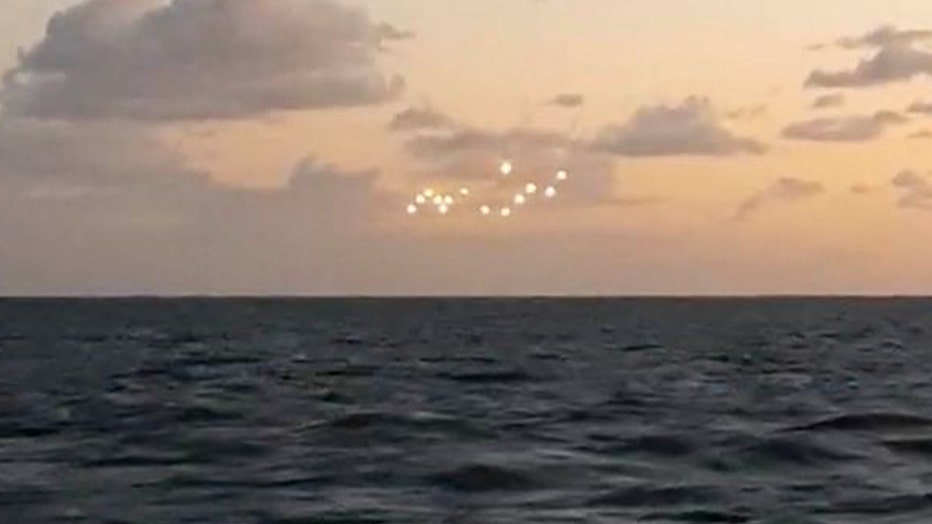 William Guy filmed the mysterious lights that were hovering motionless above the water off North Carolina's Outer Banks. (Williams Guy)