Tidal disruption events occur when a star passes too close to a black hole, and extreme gravity causes the star to rip apart into a stream of gas. NASA created this visualization to show how the tidal disruption called ASASSN-19bt happened.

COLUMBUS, Ohio - For the first time, NASA’s planet-hunting Transiting Exoplanet Survey Satellite (TESS) was able to watch the “cataclysmic phenomenon” of a star being torn apart by a black hole from beginning to end. Using follow-up observations from telescopes, astronomers were able to capture unprecedented data about the star-destroying events known as tidal disruptions.

Tidal disruption events occur when a star passes too close to a black hole, and extreme gravity causes the star to rip apart into a stream of gas. These events are incredibly rare — they typically occur once every 10,000 to 100,000 years in a galaxy the size of the Milky Way, and astronomers have only ever observed about 40 of them. To put that in perspective, supernovae, the events which cause stars to explode, happen approximately every 100 years.

The tidal disruption captured by TESS has been named ASASSN-19bt, and was generated by a supermassive black hole at the center of a galaxy about 375 million light-years away in the constellation Volans. Astronomers think it weighs about 6 million times the Sun’s mass, while the planet it ripped apart may have been closer in size to our sun. 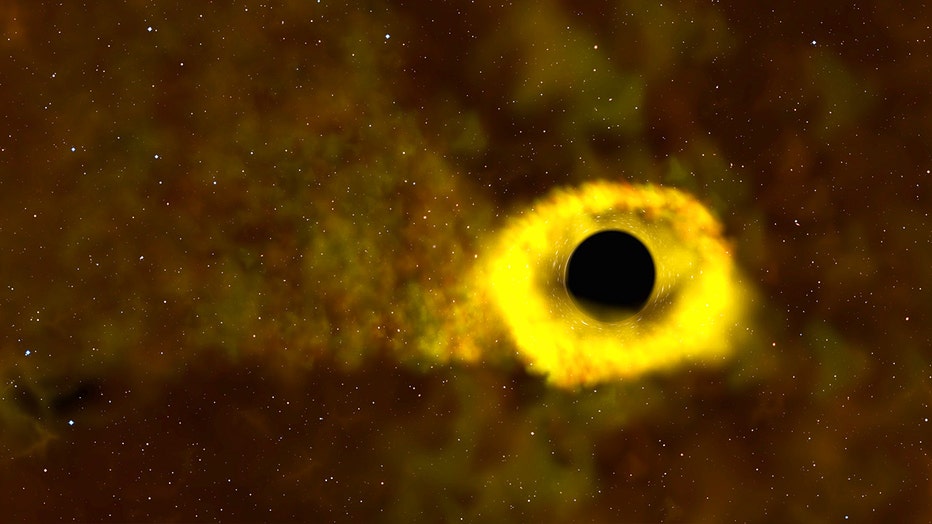 TESS monitors huge areas of the sky, which are referred to as sectors, for 27 days at a time, and it just so happened to already be pointing in the right direction to detect the tidal disruption.

TESS first spotted ASASSN-19bt on Jan. 21, which was more than a week before the event became bright enough to be detected by ASAS-SN, a global network of 20 robotic telescopes headquartered at Ohio State University.

“TESS data let us see exactly when this destructive event, named ASASSN-19bt, started to get brighter, which we’ve never been able to do before,” said Thomas Holoien, a Carnegie Fellow at the Carnegie Observatories in Pasadena, California. “Because we identified the tidal disruption quickly with the ground-based All-Sky Automated Survey for Supernovae (ASAS-SN), we were able to trigger multiwavelength follow-up observations in the first few days. The early data will be incredibly helpful for modeling the physics of these outbursts.”

Holoien was working at the Las Campanas Observatory in Chile when he got an alert from ASAS-SN’s South Africa instrument about ASASSN-19bt, and he was able to train two of the telescopes at Las Campanas toward the event. He then requested follow-up observations by Swift, European Space Agency’s XMM-Newton, as well as ground-based telescopes in the global Las Cumbres Observatory network.

ASASSN-19bt happened to occur in TESS’s continuous viewing zone — an area which is always visible to at least one of TESS’s four cameras — and this stroke of luck allowed astronomers to view this event like never before, from beginning to end.

“The early TESS data allow us to see light very close to the black hole, much closer than we’ve been able to see before,” said Patrick Vallely, a co-author and National Science Foundation Graduate Research Fellow at OSU. “They also show us that ASASSN-19bt’s rise in brightness was very smooth, which helps us tell that the event was a tidal disruption and not another type of outburst, like from the center of a galaxy or a supernova.”

NASA created an in-depth animation to explain how ASASSN-19bt occurred based on the data collected by TESS and ASAS-SN.

“For TESS to observe ASASSN-19bt so early in its tenure, and in the continuous viewing zone where we could watch it for so long, is really quite extraordinary,” said Padi Boyd, the TESS project scientist at NASA’s Goddard Space Flight Center. “Future collaborations with observatories around the world and in orbit will help us learn even more about the different outbursts that light up the cosmos.”