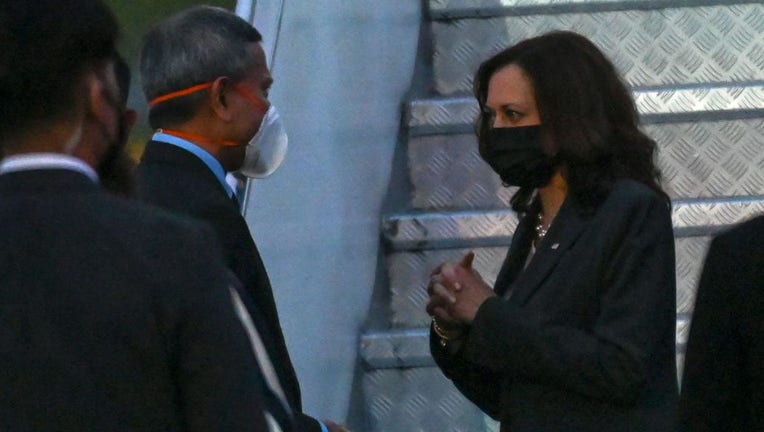 NEW YORK - Vice President Kamala Harris' trip from Singapore to Vietnam was delayed Tuesday after a report of a "recent possible anomalous health incident" in Hanoi.

No cause has been determined, but similar unexplained health ailments have since been reported by Americans serving at diplomatic posts in other countries.

The flight was delayed for more than three hours and Symone Sanders, Harris' chief spokesperson, refused to explain. Unprompted, Sanders volunteered that Harris was "well" although reporters had seen the vice president several times Tuesday and had no reason to be concerned about her health.

The VP and her delegation were expected to arrive Tuesday night in the Asian nation as part of the second leg of her trip overseas.  Earlier, Harris had delivered a speech in Singapore, castigating China for its incursions into the South China Sea, and a discussion of supply chain issues with business leaders.

RELATED: US renews call for Cuba to probe cause of health 'attacks'

The anomalous health incidents in Cuba were described as "attacks" early on.

In 2018, the United States renewed calls for the Cuban government to determine the source of health "attacks" on U.S. diplomats in Cuba affected some two dozen people. Cuba denied any involvement or knowledge of any such attacks.

Kamala Harris is the nation's first woman and person of color to become vice president. She identifies as Black and South Asian.

The U.S. government issued health alerts to Americans in China after a worker at the U.S. Consulate in Guangzhou reported symptoms and strange sounds and was flown to the U.S. That worker was then medically confirmed to have "suffered a medical incident consistent with what other U.S. government personnel experienced in Havana, Cuba," the department has said.

Unexplained sounds and vibrations that accompanied the symptoms initially led investigators to suspect a sonic weapon, though the FBI later found no evidence that sound waves could have damaged the Americans' health.