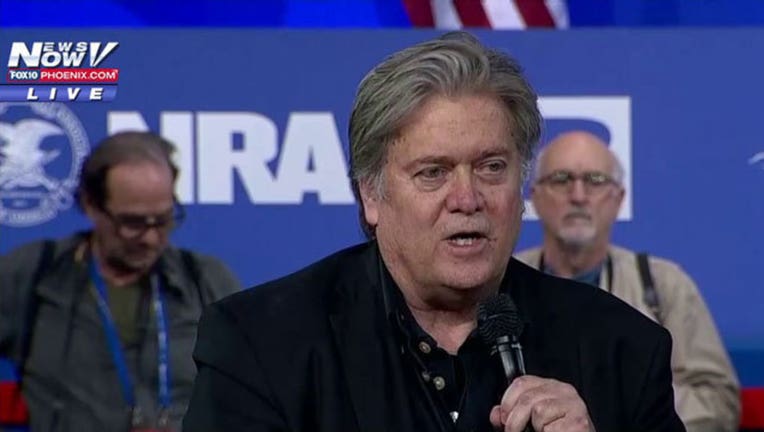 Steve Bannon, the former Trump White House strategist and current head of Breitbart News, is the latest politico touched by the scandal. Bannon, whose website has hammered Democrats for accepting Weinstein's political donations, himself profited off a relationship with the movie mogul, in an ill-fated joint venture more than a decade ago.

Bannon served as chairman of a small company that distributed DVDs and home videos, and went into business in 2005 with The Weinstein Co., led by Harvey Weinstein and his brother Bob. The Weinsteins became 70 percent owners of the now defunct venture, Genius Products.

The connection highlights the breadth of a scandal that has tainted an array of leading Democrats, including Hillary Clinton and Barack Obama, who were friendly with Weinstein and accepted his campaign donations.

Clinton and Obama have both issued statements denouncing Weinstein's actions in the wake of The New York Times' reporting about his serial sexual assaults on women. Other leading Democrats, including Senate Minority Leader Chuck Schumer of New York and Sen. Elizabeth Warren of Massachusetts, have announced plans to donate his campaign contributions to charities.

Bannon was not immediately available to comment, according to a spokeswoman.

The ties to Weinstein open Bannon up to charges of hypocrisy given Breitbart's intense focus on the scandal and its political fallout. In recent days the site has featured a blog with live updates on the story; headlines calling out Obama, Clinton and top Democrats for their ties to the producer; and stories attacking other news outlets for failing to cover the scandal with the same ferocity as Breitbart.

The connection between Bannon and Weinstein began more than a decade ago when Bannon, who had been a Goldman Sachs banker, was dabbling in Hollywood investments. Transcripts of investor conference calls at the time show Bannon enthusing about the business opportunities with the Weinsteins.

"We are extremely honored to be in business with the new Weinstein Company," Bannon told investors in one such call, declaring that "the Weinsteins have the most impressive track record in the film industry" and that "Bob and Harvey are two of the most prolific studio heads in the history of Hollywood."

Ultimately, Genius Products ended up in bankruptcy in 2011, but not before Bannon reported substantial revenues from the venture. His company Bannon Strategic Advisers had a consulting agreement worth $500,000 with Genius Products in 2006, and he was awarded bonuses of more than $200,000, according to SEC filings. Bannon also was awarded stock options in 2005 that were valued at well over $1 million at the time.

Weinstein has been fired as co-chairman from The Weinstein Co. The company's board of directors has strongly denied that it knew about Weinstein's behavior, which allegedly stretched back decades.