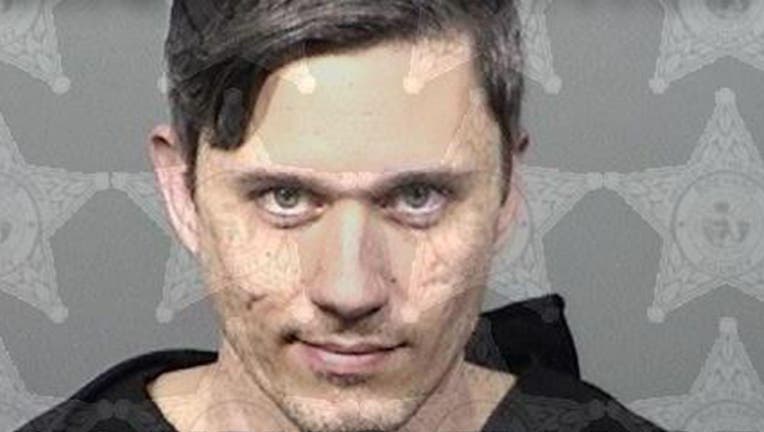 Augustus Sol Invictus was arrested Dec. 30 in Florida on a warrant issued by a police department in South Carolina. (Brevard County Sheriff's Office)

A white nationalist who spoke at the 2017 “Unite the Right” rally in Charlottesville and once claimed, during a failed campaign for U.S. Senate, to have consumed goat blood, was arrested this week in Florida.

Augustus Sol Invictus, 36, was taken into custody Monday on charges of kidnapping, domestic violence of a “high and aggravated nature” and possession of a firearm during a crime of violence, said Lt. Michael Chavis, a spokesman for the Rock Hill, S.C., police department.

Invictus was arrested on a warrant from that department by Brevard County, Fla., sheriff’s deputies.

According to a redacted Rock Hill police report obtained by Fox News, on Dec. 12 Invictus held a gun to his wife's "head and forced her to go with him" to Jacksonville, Fla.

“This incident took place in the presence of their children,” the report adds, and “when in Florida [the woman] was able to separate herself from her husband and escape back to Rock Hill with her children.”

Chavis said Invictus will be extradited back to South Carolina to face the charges.

During a 2016 Senate bid to unseat U.S. Sen. Marco Rubio, R-Fla., Invictus got widespread attention for claiming that he killed a goat and drank its blood as part of a pagan ritual.

“I did sacrifice a goat. I know that’s probably a quibble in the mind of most Americans,” he once told the Associated Press. “I sacrificed an animal to the god of the wilderness... Yes, I drank the goat’s blood.”

Invictus failed, however, to win the nomination from Florida's Libertarian Party to challenge Rubio. The AP says he has changed his given name -- which he declined to reveal in a 2015 interview -- to a Latin phrase that means “majestic unconquered sun.”

Invictus, an Orlando-area attorney, has called for violent uprisings, according to the Associated Press. White nationalist Richard Spencer, who organized the deadly Charlottesville rally that refocused attention on the country's frayed race relations, also has credited Invictus with drafting the core tenets behind the rally, it added.

Jail records show that Invictus is being held without bond and is scheduled to appear in court Jan. 15.