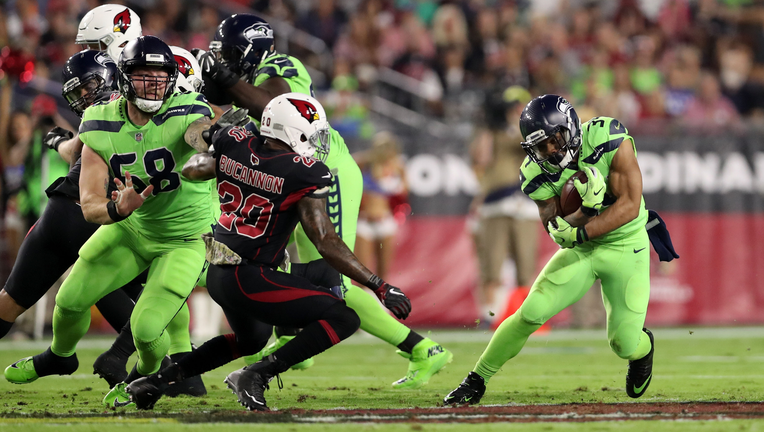 GLENDALE, Ariz. (AP) - Russell Wilson threw two touchdown passes to Jimmy Graham and the Seattle Seahawks added to their history of success in Arizona with a 22-16 victory over the Cardinals on Thursday night.

The Seahawks (6-3) limited Adrian Peterson to 29 yards in 21 carries in a game marred by a host of injuries, including a season-ending one to Seattle cornerback Richard Sherman.

The Seahawks improved to 4-0-1 in Arizona in Bruce Arians' five seasons as coach of the Cardinals (4-5). The only time the Seahawks haven't beaten Arians' team in Arizona was in last season's 6-6 tie.

Seattle's Kam Chancellor forced a fumble by Peterson on Arizona's first offensive play and later tackled him in the end zone for a safety.

Sherman limped off the field in the third quarter, one of at least seven players who left the game with injuries. Coach Pete Carroll said after the game that Sherman had a ruptured Achilles tendon.

Wilson, sacked a season-high five times, completed 22 of 32 passes for 238 yards. Arizona's Drew Stanton, in his second start since Carson Palmer went down with a broken arm, completed 24 of 47 for 273 yards and a touchdown. Larry Fitzgerald caught 10 passes for 113 yards for the Cardinals, topping 15,000 yards receiving for his career in the process.

The night's biggest play came early in the fourth quarter. With his team leading 15-10, Wilson scrambled and spun his way out of serious trouble repeatedly before throwing from his heels to Doug Baldwin. Antoine Bethea fell down trying to knock the pass away and Baldwin raced downfield on a 54-yard play to the Arizona 2-yard line.

"That was an extraordinary play," Carroll said. "I need to see it again because I can imagine all of those spins and all that stuff he was doing to find the time. "

Arians called the play "probably the deciding factor in the game."

"The defense played lights out, other than one play," Arians said.

Kerwynn Williams scored on a one-yard run with 20 seconds to play for the Cardinals and Seattle recovered the onside kick try to seal the win.

There were injuries to important players on both sides.

Arizona left tackle D.J. Humphries and safety Tyvon Branch both left with right knee injuries early in the game. Humphries injured the same knee in the season opener. Branch was the Cardinals' leading tackler through eight games with 68.

Seahawks defensive tackle Jarran Reed left in the first quarter with a hamstring injury. And Seattle left tackle Duane Brown, in his second game since being acquired in a trade from Houston, went down with an ankle injury in the second quarter.

The Seahawks already were without safety Earl Thomas, who sat out the game with a hamstring injury.

Seattle entered the game as the most penalized team in the league with 82, nine more than its nearest competitor, the New York Jets and it looks like their lead in that category for another week is assured.

With their 12 penalties (for 108 yards) on Thursday, the Seahawks have 94 in nine games.

Four Seattle penalties for 41 yards aided the Cardinals on their first touchdown drive.

The Seahawks had 16 penalties for 138 yards in their home loss to Washington on Sunday.

The game came just four days after Peterson carried a career-high 37 times for 159 yards in a win at San Francisco.