A fire raging at a North Carolina fertilizer plant forced the evacuations of thousands of people on Feb. 1, 2022, as firefighters warned that chemicals at the site could cause an explosion.

WINSTON-SALEM, N.C. - The risk of an explosion remained Thursday at the site of a fertilizer plant fire in Winston-Salem, North Carolina, days after it first broke out, officials said — while also warning about other continued health hazards in the area.

Winston-Salem Battalion Chief Patrick Grubbs said during a briefing that despite overnight rain that helped to suppress the uncontrolled fire, there was still a risk of explosion. The fire became a bit smaller, but there were still active flames, he added.

The fire began Monday night at the Winston Weaver Company fertilizer plant on the north side of the 250,000-person city and quickly consumed the entire building, which collapsed.

Firefighters battled the flames for about 90 minutes, but the risk of explosion forced them to retreat. No injuries were reported. An estimated 500 tons of combustible ammonium nitrate were housed at the plant and nearly another 100 tons of the fertilizer ingredient were in an adjacent rail car. 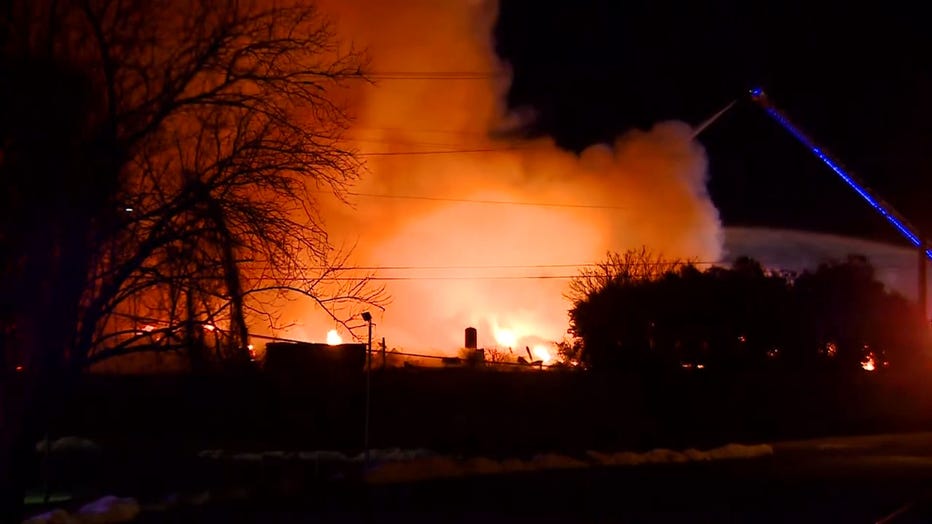 About 6,500 people in 2,500 homes were asked to evacuate soon after the fire broke out. Officials said Thursday there was no projected return time for that area.

"Our message has stayed the same the whole time — we’re asking all the citizens to stay out of the area and if they’re in the area to evacuate," Grubbs said.

Grubbs added that anyone with respiratory issues should stay out of the smoke cloud, but in general, the smoke also isn't good for anyone who is healthy. The smoke and runoff from the site continued to be an issue in Winston-Salem, prompting school closures and water advisories, according to FOX 8.

Overnight rain in the area also meant that drones and helicopters couldn’t survey the fire from above, which they have been doing this week to watch for any changes in conditions, officials said. A fire truck at the scene has been putting water on hot spots.

The Winston-Salem Fire Department on Thursday shared helmet camera footage of some firefighters returning to the site, which showed thick smoke still billowing from the scene.

Officials initially thought the situation could end in 36 hours, maybe even two days. But Winston-Salem Fire Chief Trey Mayo said Wednesday that there were too many unknowns to make any predictions.

Specialists from several states were involved and air monitoring equipment around the scene has been checking for different gases, Grubb said.

Fire Investigator Rick McIntyre said a 12-person team, including federal and state investigators, is collecting information, conducting interviews and reviewing drone footage to help understand the damage that has occurred.