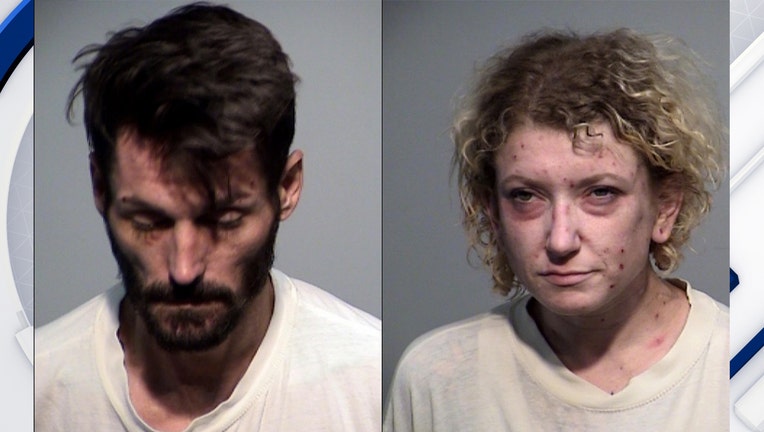 CORDES JUNCTION, Ariz. - Officials with the Yavapai County Sheriff's Office say a tip from a passer-by led to the arrest of two people accused of possessing fentanyl.

In a statement released Saturday afternoon, officials with YCSO say they received a tip on the afternoon of July 8 from an anonymous witness, who saw the occupant of a car doing an injection outside a gas station in Cordes Junction.

Deputies, according to YCSO officials, later found the car in the parking lot, and the two people inside the car were identified as 31-year-old Richard Killeen and 33-year-old Shannon Barnard of Ash Fork. Deputies who spoke with Killeen saw a cap to a hypodermic syringe lying on the ground, near the driver's door.

Killeen, according to investigators, admitted to being a drug user in the past but claimed no knowledge of a string. Barnard also admitted to prior drug use but denied any connection to a syringe.

Investigators say a Sheriff's Office K-9 was alerted to the odor of narcotics from the vehicle, and a subsequent search turned up 65 light blue pills with M and 30 markings, which YCSO official say denotes fentanyl, in addition to a Narcan nose applicator, pieces of tin foil with a black residue, a hypodermic needle, and a small baggie containing about 0.6 grams of heroin.

"Based on the evidence recovered, a discussion with both suspects and a consent review of Shannon’s cell phone messages, deputies determined the pair was involved in the use and sales of fentanyl. The street value of the pills seized averages about $1,500," read a portion of the statement.

Officials say both Killeen and Barnard were booked into the Camp Verde Detention Center and accused of possession of narcotics drugs and possession/use of narcotic drugs for sale.