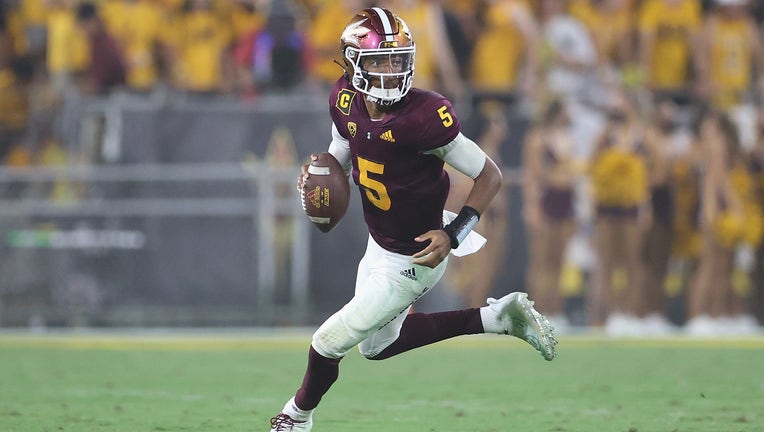 TEMPE, ARIZONA - SEPTEMBER 11: Quarterback Jayden Daniels #5 of the Arizona State Sun Devils looks to pass against the UNLV Rebels during the second half of the NCAAF game at Sun Devil Stadium on September 11, 2021 in Tempe, Arizona. (Photo by Christ

TEMPE, Ariz. - Arizona State quarterback Jayden Daniels reportedly entered the transfer portal and will look for a new school to play for in 2022.

Daniels played the last three seasons with the Sun Devils. He played in 12 games as a freshman, all four games of the 2020 coronavirus-impacted season and 13 games in 2021.

On Thursday, 247 Sports reported Daniels was entering the transfer portal.

In 29 collegiate games, Daniels has 6,025 passing yards and 32 touchdown passes. The Sun Devils were 8-5 last season and lost in the Las Vegas Bowl to Wisconsin, 20-13. Daniels is considered the best quarterback remaining in the transfer portal.

Someone can be heard saying, "N---- sucks anyway," on the video.

Arizona State has been under investigation for potential recruiting violations. The Sun Devils are accused of hosting recruits on campus during an NCAA-mandated COVID-19 "dead" period.

Several coaches have left the program amid the NCAA probe, and the team has lost commitments from its 2022 class.

Herm Edwards remains head coach of the team despite the controversy surrounding the program.