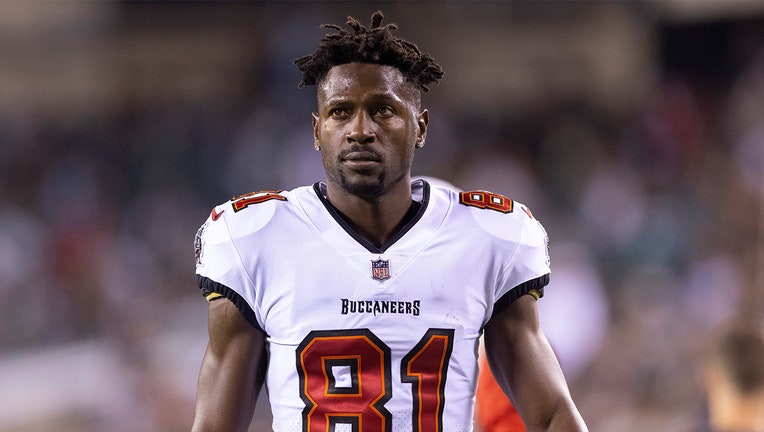 PHILADELPHIA, PA - OCTOBER 14: Antonio Brown #81 of the Tampa Bay Buccaneers looks on prior to the game against the Philadelphia Eagles at Lincoln Financial Field on October 14, 2021 in Philadelphia, Pennsylvania. (Photo by Mitchell Leff/Getty Images

TAMPA, Fla. - The Tampa Bay Buccaneers have officially terminated the contract for Antonio Brown and responded to his recent allegations in the days after he walked off the field in the middle of Sunday's game.

The team released a statement Thursday afternoon, saying the decision is "effective immediately." Yesterday, Brown released a statement saying he played through extreme pain as the Bucs faced the Jets this past weekend. He claimed he was injected with a "powerful and sometimes dangerous painkiller," and was pressured by an unnamed coach to play while injured.

I told him, 'It's my ankle.' But he knew that. It was well-documented and we had discussed it. He then ordered me to get on the field. I said, 'Coach, I can't.' He didn't call for medical attention. Instead, he shouted at me, 'YOU'RE DONE!' while he ran his finger across his throat. Coach was telling me that if I didn't play hurt, then I was done with the Bucs."

PREVIOUS: Antonio Brown says he needs surgery after 'pressure directly from my coach to play injured'

In the Buccaneers' response, they said:

"While Antonio did receive treatment on his ankle and was listed on the injury report the week leading up to last Sunday’s game, he was cleared to play by our medical team prior to the start of the game and at no point during the game did he indicate to our medical personnel that he could not play. We have attempted, multiple times throughout this week, to schedule an evaluation by an outside orthopedic specialist, yet Antonio has not complied. Maintaining the health and wellness of our players is of the utmost importance to our organization."

"At no point in time during that game did he ever ask the trainer or doctor about his ankle. That’s the normal protocol. I was never notified of it," Arians said in a Thursday press conference following the team’s announcement. "He was very upset at halftime about who was getting targeted. Got that calmed down. Players took care of it. It started again on the sideline. We called for the personnel group that he had played in the entire game. He refused to go in the game. That’s when I looked back and saw him basically wave off the coach."

Arians said he approached Brown to find out what was going on.

"I ain't playing," Brown said, according to the head coach.

"I ain't getting the ball."

"That's when I said, ‘You’re done. Get the F out of here," Arians recalled. "That's the end of it. We are working on Carolina. That’s the end of the story. Hopefully, that ends today."

On Sunday, Brown left before the Bucs made a comeback against the New York Jets. He appeared animated while talking to teammate Mike Evans when he stripped off his pads, jersey, gloves and T-shirt — tossing the gloves and T-shirt into the stands — and then walked bare-chested down the sideline and into the end zone. He then waved to fans as jogged through the end zone and into the tunnel at MetLife Stadium.

Tampa Bay will face the Carolina Panthers this Sunday at 4:25 p.m. It will be the team's last game for the regular season.