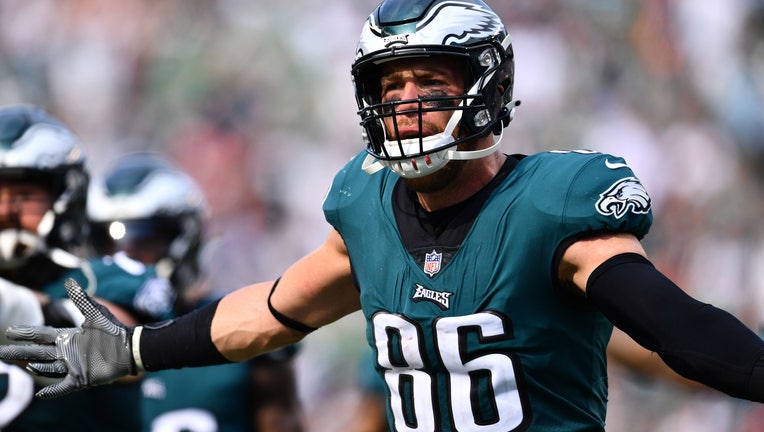 PHILADELPHIA, PA - OCTOBER 03: Philadelphia Eagles Tight End Zach Ertz (86) reacts after a penalty call overturns a touchdown in the second half during the game between the Kansas City Chiefs and Philadelphia Eagles on October 03, 2021 at Lincoln Fin

The Cardinals announced the trade on Oct. 15. In exchange for Ertz, the Cardinals sent cornerback Tay Gowan and a fifth-round pick in the 2022 NFL Draft to Philadelphia.

Ertz, a 9-year NFL veteran, has been selected to three Pro Bowls and was named first-team All-Pro in 2018.

Ertz had four receptions for 29 yards and a touchdown during Thursday night’s 28-22 loss to Tampa Bay.

Ertz was selected by Philadelphia in the second round of the 2013 draft. He has 579 receptions for 6,267 yards and 38 touchdowns in 123 career regular-season games.

Ertz also caught the winning touchdown pass in the fourth quarter of the Eagles’ 41-33 victory over the New England Patriots in the 2018 Super Bowl.

Gowan was selected by the Cardinals in the sixth round of this year’s draft. The 6-foot-2 Gowan has yet to appear in a regular-season game.

The trade comes after TE Maxx Williams was lost for the season after suffering a knee injury in the Cardinals' 17-10 win over the San Francisco 49ers.

The Cardinals will try to stay unbeaten Sunday in a road game against the Cleveland Browns.