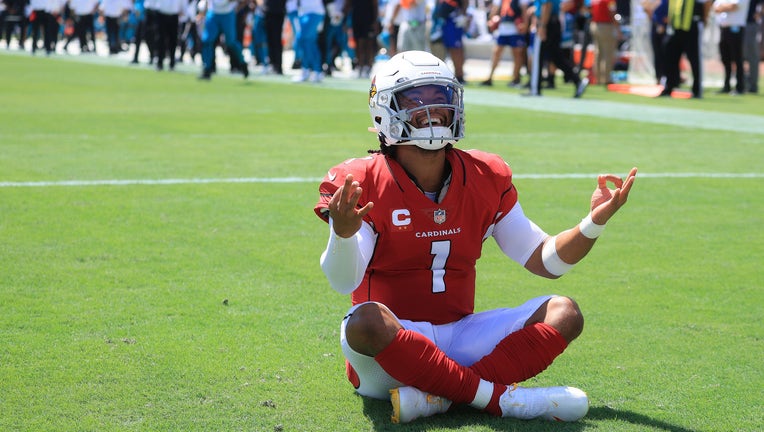 JACKSONVILLE, FLORIDA - SEPTEMBER 26: Kyler Murray #1 of the Arizona Cardinals celebrates a touchdown in first quarter in the game against the Jacksonville Jaguars at TIAA Bank Field on September 26, 2021 in Jacksonville, Florida. (Photo by Sam Green

GLENDALE, Ariz. - The Arizona Cardinals finally get to play a home game after nearly a month away from State Farm Stadium.

In a strange twist, that’s not necessarily good news for the franchise.

The Cardinals have constructed their NFL-best 10-2 record in an unorthodox way: They’ve been historically good on the road with a 7-0 record and all the wins have come by double digits. At home, they’re just 3-2 and even the wins have sometimes been a struggle.

"That’s something that has to be different than it has been," quarterback Kyler Murray said. "Our closer games have been at home. We’ve started slow at home. ... We’ve got to somehow bring that type of (road) energy and it’s got to be different, because what we’ve been doing hasn’t been working."

The Cardinals get their chance to improve at home when they host the division-rival Los Angeles Rams (8-4) on Monday night. Arizona can clinch its first playoff berth since 2015 while the Rams are trying to tighten the NFC West race and build off a 37-7 win over the Jacksonville Jaguars last week.

Arizona beat Los Angeles 37-20 earlier this season in one of the first indications that this could be a special season for the Cardinals. The win snapped a seven-game losing streak in the series.

Cardinals coach Kliff Kingsbury has acknowledged that game was a big step for the franchise during his third season in charge. But he also doesn’t expect it to have a lot of carryover to Monday’s matchup.

"They continue to evolve, just like everybody else," Kingsbury said. "Offensively, tremendous group of wideouts. (Quarterback Matthew) Stafford has been a great player in this league for a long time, and (coach) Sean (McVay) always has a great plan, so they’ll continue to do what they do."

The Rams shook off a three-game losing streak in a dominant win over the Jaguars last Sunday. Sony Michel ran for a season-high 124 yards to give the offense some balance while Stafford threw for 295 yards and three touchdowns.

Now they’ll try to do something similar against the Cardinals, who have one of the NFL’s best defenses.

"What I want to see, not only from Matthew but the whole offense, just sharp, clean execution and operation where you stay on track," McVay said. "There’s a lot of things that are going to be imperative, and I think the margin for error is very slim against a team like this, but we’re excited about the challenge for sure."

Murray and star receiver DeAndre Hopkins will be playing their second game in a row after both missed three straight games with injuries. The two connected on a 20-yard touchdown in last weekend’s win against the Bears.

"If you want to be great," Murray said. "these are the types of games you’ve got to step up to the plate."

Arizona running back James Conner will try to tie a franchise record by scoring a touchdown in his seventh consecutive game on Monday. Conner has scored nine touchdowns over the six-game stretch, becoming one of the Cardinals’ go-to playmakers with Murray, Hopkins and running back Chase Edmonds all batting injuries. Conner is trying to match John David Crow, who scored in seven straight games from 1959-60.

Rams left tackle Andrew Whitworth will make history in Glendale as the first player in NFL history to start a game at his position at 40 years old. Whitworth, who celebrates his birthday Sunday, has been the cornerstone of Los Angeles’ offense during McVay’s half-decade in charge. Although his teammates tease him about his increasingly gray beard, his play has shown no visible signs of decline in his 16th NFL season, and he’s increasingly likely to return next year.

There are other candidates for the NFL’s Coach of the Year, but two of the front-runners appear to be Kingsbury and Patriots coach Bill Belichick. Kingsbury worked under Belichick earlier in his career and grinned when asked if it was nice to be mentioned for the same award along with a six-time Super Bowl-winning head coach.

"I mean, they should just name the award Bill Belichick," Kingsbury said. "Until he retires, I don’t think anybody else should get that award."

The Rams finally produced their first 100-yard rusher of the season last week when Michel went for 121 against Jacksonville. Michel’s heavy, tackle-breaking style of running was a welcome change of pace for Los Angeles, which is 23rd in the NFL in yards rushing after rarely committing to establishing a ground game this year. With Darrell Henderson still slowed by his thigh injury, the Rams would seem wise to try a similar Michel-focused game plan against the Cardinals, who have allowed their opponents to rush for 4.7 yards per carry this season, one of the worst numbers in the league.