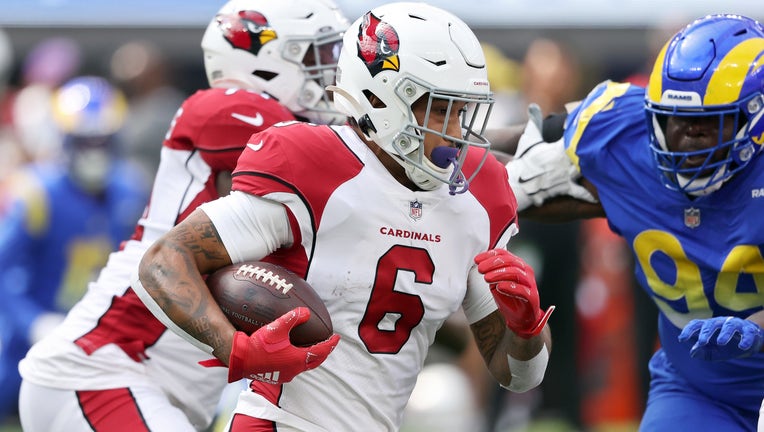 INGLEWOOD, CALIFORNIA - OCTOBER 03: James Conner #6 of the Arizona Cardinals runs with the ball against the Los Angeles Rams in the first quarter at SoFi Stadium on October 03, 2021 in Inglewood, California. (Photo by Ronald Martinez/Getty Images) (Getty Images)

INGLEWOOD, Calif. - In every quarter of a dominant victory on the Rams’ home turf, Kyler Murray and the Arizona Cardinals confirmed they’re no longer the annual afterthought in the NFC West.

The unbeaten Cards have shoved their way to the front of this ultracompetitive division with an offense that could run up the score on anybody, combined with a defense that finally managed to outsmart Sean McVay.

Murray passed for 268 yards and two touchdowns and ran for 39 more yards, and the Cardinals extended their longest perfect start since 2012 with a 37-20 win over Los Angeles on Oct. 3.

The Cards haven’t won the division or had a winning record since 2015, but they’re off to a roaring start to 2021 highlighted by this blowout of the previously unbeaten Rams.

"I feel like as a team, we’re building towards something," said cornerback Byron Murphy Jr., who made an interception in the first half. "We hadn’t beaten the Rams in how many years? I don’t know the exact number. Five years? But this is something definitely growing."

Kliff Kingsbury’s Cards won with style, lighting up the Rams’ defense for 465 total yards and scoring touchdowns after two early takeaways to affirm their status as a contender despite playing three of their first four games on the road.

"Not really too worried about what other people think," Murray said. "I think the guys in the locker room understand what we’re doing, what we’re capable of and where we can take it."

Maxx Williams caught a TD pass from Murray, who went 24 for 32 and repeatedly frustrated the Rams’ defense while the Cards scored on seven of eight possessions after a game-opening punt. Arizona’s defense made several big plays, and it sealed the team’s first victory over the Rams since Jan. 1, 2017, by stopping Matthew Stafford and the LA offense on downs at the 1 with 12:05 to play.

The NFL’s only remaining unbeaten teams are Arizona and Las Vegas, which faces the Chargers at SoFi Stadium on Monday night. The Cardinals celebrated their win on the same field but were mostly buttoned up in their postgame comments.

"Not a statement," Kingsbury said. "We wanted to get a week better. Division games are important. We’ve got to continue to play physical football and clean some stuff up."

Stafford went 26 of 41 for 280 yards and two touchdowns in his first ineffective game for the Rams (3-1), who failed to start 4-0 for the first time since 2018. One week after a statement victory over defending Super Bowl champion Tampa Bay on the same field, Los Angeles produced an ugly performance on both sides of the ball.

"This is a prove-it (sport), and you’ve got to go out there and do it every time," Stafford said. "I wasn’t good enough at doing that today. I think as a team, we probably weren’t good enough as far as going out in every single play and executing it."

Van Jefferson caught an early TD pass and Robert Woods made a TD grab with 1:14 to play, but Stafford was frequently off in his connections with his receivers. McVay regularly abandoned his running game despite Darrell Henderson’s 89 yards — the second-best performance of his career — on just 14 carries against a defense that hasn’t stopped the run well this season.

The Rams had the NFL’s No. 1 defense in yards allowed and points allowed last season, but they’ve given up 911 yards and 61 points in the last two weeks. Los Angeles’ defense had few answers for Murray, who consistently found open receivers or picked up his own yardage.

"That’s the athleticism and just the great playmaker that he is," McVay said. "There were a couple instances where we feel like we could have been better, but you’ve got to give him credit. He’s a playmaker."

Arizona scored touchdowns after both of Los Angeles’ turnovers in the first half, and the Cardinals now have a plus-5 turnover differential this season.

Green’s long TD catch came after Murphy picked off Stafford’s underthrown pass to DeSean Jackson. Williams’ TD catch resulted from a drive that began with Sony Michel’s fumble and included an exceptional first-down scramble by Murray on 3rd and 16.

Stafford had trouble getting the ball to NFL receiving leader Cooper Kupp, who finished with only five catches for 64 yards on a whopping 13 targets. Stafford has relied heavily on Kupp early in their first season together, and the Cards were aware.

"We know what type of player he is," Murphy said of Kupp. "This week, it was emphasized because we know on third downs, he’s a favorite target."

Murphy injured his ribs in the first half but returned to the game. He has three interceptions in the Cardinals’ first four games.

Rams: A short week before they visit the Seattle Seahawks on Thursday night.