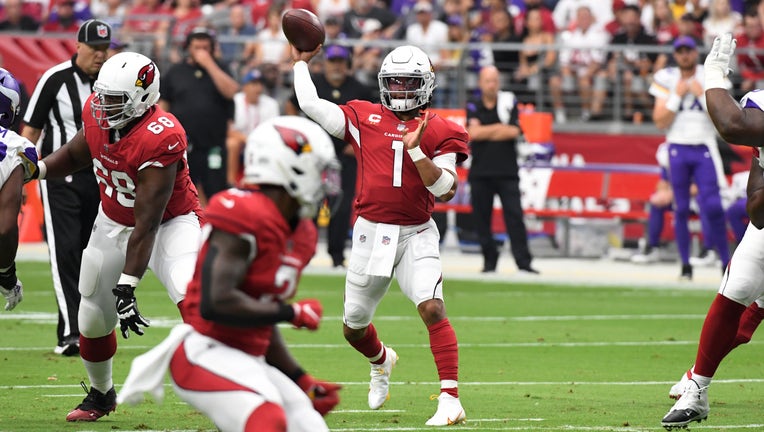 GLENDALE, ARIZONA - SEPTEMBER 19: Kyler Murray #1 of the Arizona Cardinals looks to throw the ball against the Minnesota Vikings at State Farm Stadium on September 19, 2021 in Glendale, Arizona. (Photo by Norm Hall/Getty Images)

He also has 12 career games with both a passing and rushing touchdown, which is now fourth in NFL history for a quarterback in his first three seasons in the NFL. Only Cam Newton (20), Josh Allen (16) and Dak Prescott (13) have more in the same span.

The Cardinals are 2-0 to start the season, but the win over the Vikings wasn’t pretty. It came down to a missed Greg Joseph kick that determined the game.

Murray acknowledged how ugly the win was.

"I tell you all the time, it comes down to shooting ourselves in the foot and stopping ourselves," he said, via the team’s website. "When we score, it feels easy, it feels fun. When we turn the ball over, negative plays, it's like ‘Damn,’ s--- feels ugly. It is what it is, we have to continue to get better and continue practicing."

Murray and Arizona play the Jacksonville Jaguars on the road in Week 3.