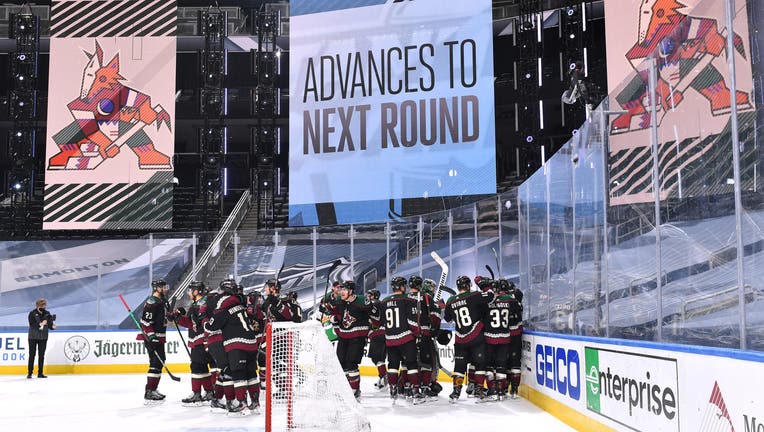 EDMONTON, ALBERTA - AUGUST 07: The Arizona Coyotes celebrate defeating the Nashville Predators 4-3 in overtime on a goal by Brad Richardson #15 to advance to the next round after Game Four of the Western Conference Qualification Round at Rogers Place

EDMONTON, Alberta - Brad Richardson scored on a rebound in overtime, Darcy Kuemper stopped 49 shots and the Arizona Coyotes advanced in the postseason for the first time in eight years with a 4-3 win over the Nashville Predators on Friday.

The Coyotes, the Western Conference’s No. 11 seed, took a 2-0 lead early in the second period. But they allowed Nashville to tie it before going ahead 3-2 on Jordan Oesterle’s goal early in the third.

Nashville pulled goalie Juuse Saros late in the period and Filip Forsberg tied it with 32 seconds left on a one-timer after Roman Josi kept the puck in Arizona’s zone.

Richardson won it after he redirected Vinnie Hinostroz’s shot and punched in the rebound past Saros to help the Coyotes win the Stanley Cup qualifier series 3-1.

Michael Grabner and Phil Kessel also scored for Arizona, which faces Colorado or Vegas in the next round after advancing in the postseason for the first time since reaching the 2012 Western Conference finals.

Viktor Arvidsson scored for the third straight game before taking a shot to the ribs and leaving late in the second period, leaving Nashville without one of its top-line forwards.

Matt Duchene also scored and Saros stopped 30 shots for the Predators, who bowed out of the postseason as the West’s No. 6 seed.

The Coyotes took control of the series with a 4-1 win in Game 3 behind Kuemper’s 39 saves and three goals in the third period.

Game 4 played out the same way.

Nashville had nine of the first 10 shots, including one by Ryan Ellis that clanged off the post. Kuemper made some spectaculars saves during the flurry — 16 in the period — and Grabner beat Saros to the glove side with a wrister from the right circle.

Arizona kept the momentum going early in the second period, scoring 98 seconds in when Kessel beat Saros under his stick blocker after Nashville’s goalie turned it over in his own end.

The Predators came back to life on a power play a few minutes later, when Duchene redirected a shot by Josi past Kuemper from just outside the crease.

Arvidsson tied it with his third goal of the series, one-timing a pass from Ellis to beat Kuemper from the left faceoff dot.

The Coyotes buzzed to start the third period and Oesterle put Arizona up 3-2 on a shot from the right circle Saros couldn’t see through traffic.

Kuemper withstood a flurry of shots in the final two minutes before Forsberg sent it to overtime from near the left faceoff dot for his third goal of the series.

NOTES: The Coyotes were without C Nick Schmaltz due to a head injury for the fourth straight game. ... Nashville is 6-13 in elimination games. ... Arizona backup goalie Antti Raanta missed his second straight game after suffering an injury in warmups before Game 2.

Arizona will play Colorado or Vegas in the next round.