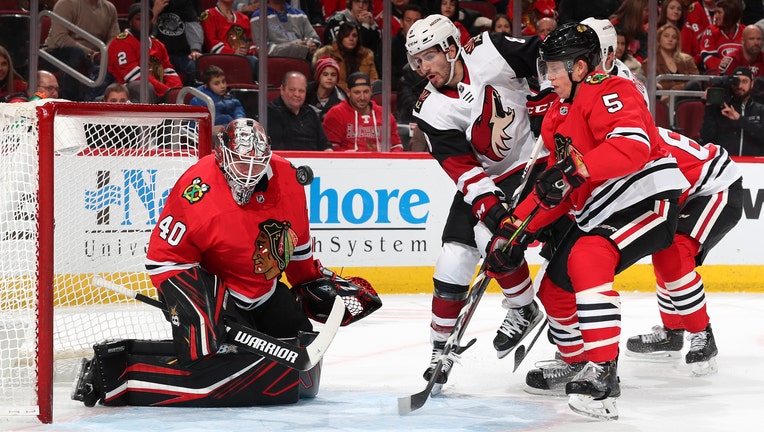 Nick Schmaltz #8 of the Arizona Coyotes and Connor Murphy #5 of the Chicago Blackhawks chase the puck in front of goalie Robin Lehner #40 in the first period at the United Center on December 8, 2019 in Chicago, Illinois. (Photo by Chase Agnello-Dean/

CHICAGO (AP) — Conor Garland and Nick Schmaltz scored in the shootout against Robin Lehner, and the Arizona Coyotes rallied from two goals down to beat the Chicago Blackhawks 4-3 on Sunday night.

Patrick Kane connected against Darcy Kuemper in the tiebreaker as the Coyotes improved to 5-2 in shootouts this season and finished a 3-1 road trip.

Garland got his team-leading 12th goal in regulation, and Carl Soderberg and Christian Fischer also scored. Kuemper finished with 26 saves through overtime.

Jonathan Toews has a goal and two assists for his first three-point game this season. Alex DeBrincat and Dominik Kubalik also scored for injury-depleted Chicago, which played beyond regulation for the third straight game following an overtime win at Boston on Thursday and a shootout win at New Jersey the following night.

Lehner had 44 saves — including several sensational ones — as the Coyotes pressured late.

Chicago led 3-1 after one period.

Toews opened the scoring 53 seconds in. He connected on a backhand deflection of Calvin de Haan’s soft cross-ice feed, despite being tied up with defenseman Jason Demers.

DeBrincat’s power-play goal at 8:40 made it 2-0. The forward slipped behind Arizona’s defense on the left side, took Kane’s feed, then burst to the net and beat Kuemper high on the glove side.

Arizona cut to 2-1 at 11 minutes from a goalmouth scramble when Christian’s Dvorak’s feed from the left side of the net ticked in off Fischer’s skate. Kubalik’s midair deflection of Connor Murphy’s shot from the left point with 2:05 left in the first restored Chicago’s two-goal lead.

Garland and Soderberg scored power-play goals in the second to tie it at 3. Garland trimmed it to 3-2 at 6:32 on a wrist shot from the slot.

Chicago rookie defenseman Dennis Gilbert and Demers squared off in a free-swinging fight at 7:01. Gilbert was assessed an extra minor penalty for instigating, as well as a 10-minute misconduct.

Soderberg knotted it at 3 on the ensuing man advantage at 8:53 when his pass from right circle deflected off Chicago’ defenseman Slater Koekkoek’s stick and over Lehner’s shoulder.

Lehner robbed Clayton Keller with a flashy glove save at 9:19 of the scoreless third to keep it tied. Keller was alone at the low edge of the right circle during Arizona’s fifth straight power-play when he fired and Lehner reached to grab the shot.

Lehner slid across the crease to stop Jakob Chychrun at 1:40 of overtime. Kuemper blocked Toews’ tip-in attempt from the edge of the crease during Chicago’s power-play midway through the extra period.

Arizona finished the OT on a power-play of its own after Toews sent off for slashing.

Blackhawks: At Vegas on Tuesday night to start a three-game trip.