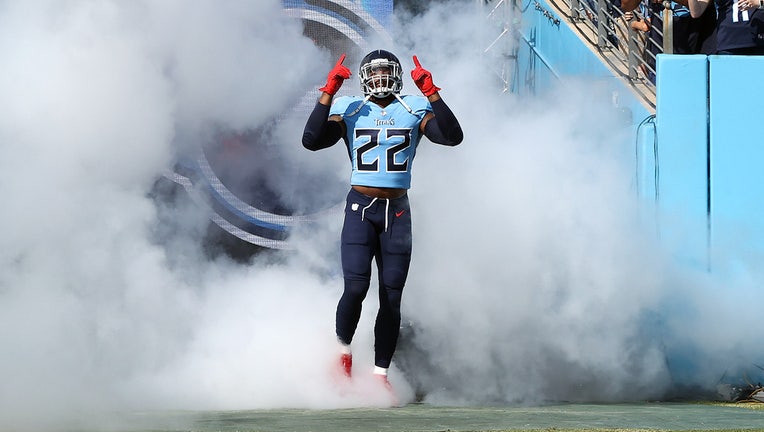 Derrick Henry of the Tennessee Titans against the Kansas City Chiefs at Nissan Stadium on October 24, 2021 in Nashville, Tennessee. (Photo by Andy Lyons/Getty Images)

NASHVILLE, Tenn. - The Tennessee Titans will have Derrick Henry on the field for their AFC divisional game with Cincinnati after moving the NFL’s 2019 and 2020 rushing leader from injured reserve to the active roster.

The Titans (12-5) made the roster move Friday after watching Henry practice since Jan. 5.

Henry, 28, broke his right foot Oct. 31 and had the break repaired with a steel plate Nov. 2. Henry was the NFL’s rushing leader when placed on injured reserve. Despite missing the final nine games, Henry finished as the league’s ninth-leading rusher with 937 yards.

Signs that Henry would play became clear Wednesday when he talked with media for the first time since breaking his foot, and said he felt ready. He was voted the 2020 AP NFL Offensive Player of the Year after running for 2,027 yards, the fifth-highest total in NFL history.

RELATED: NFL playoff schedule: What you need to know about Divisional Round matchups

Coach Mike Vrabel said Thursday that Henry had been progressing well after they increased his workload through the week. That included putting pads on Tuesday to give Henry a chance to thud into and run through defenders.

The prospect of having Henry back on the field against the Bengals (11-7) has had his teammates thrilled. Henry ranks second all-time averaging 111.7 yards rushing in the postseason.

"We know what Derrick can do when he’s in there ...," left tackle Taylor Lewan said Thursday on the final day players talked before kickoff. "Adding Derrick to the mix, if that happens, is exciting. However, ... just because 22′s in the game doesn’t mean we’re going to automatically win."