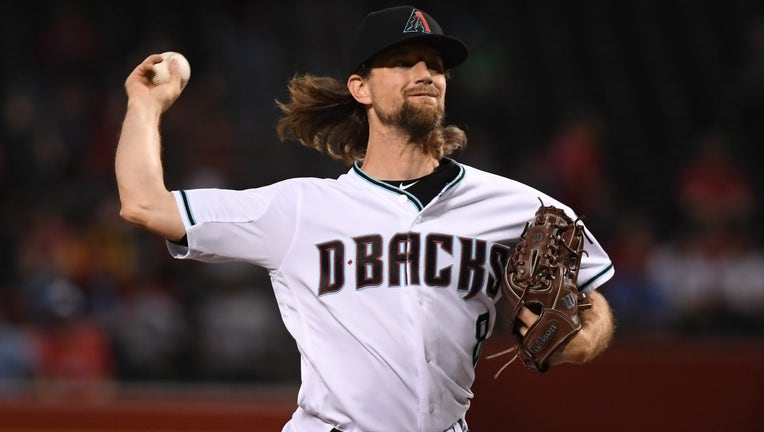 PHOENIX, ARIZONA - SEPTEMBER 24: Mike Leake #8 of the Arizona Diamondbacks delivers a pitch against the St Louis Cardinals at Chase Field on September 24, 2019 in Phoenix, Arizona. (Photo by Norm Hall/Getty Images)

PHOENIX - Arizona Diamondbacks right-hander Mike Leake has become the first known player to opt out of the 2020 season due to concerns about the coronavirus.

“During this global pandemic, Mike and his family had many discussions about playing this season,” Leake’s agent, Danny Horwits, said in a statement Monday. “They took countless factors into consideration, many of which are personal to him and his family. After thorough consideration, he has chosen to opt out of playing in 2020. This was not an easy decision for Mike. He wishes the best of luck and health for his Diamondback teammates this season and he’s looking forward to 2021.”

The 32-year-old Leake started 10 games for Arizona after being traded from Seattle for outfielder Jose Caballero and cash in a 2019 deadline deal. Leake went 3-3 with a 4.35 ERA with Arizona and earned his first AL Gold Glove Award for his time with the Mariners.

“It definitely impacts us,” Hazen said. “Certainly, he’s a good major league starting pitcher. To what extent it’s going to impact us, it’s hard to say. I think I would probably have a different answer if it was over 162 (games) as opposed to if it was over 60.”

Major League Baseball is allowing players with preexisting medical conditions or compromised immune systems to opt out of the 2020 season, but Hazen would not elaborate whether Leake falls under that category.

The Diamondbacks also will be without two international prospects due to travel issues during the pandemic: outfielder Kristian Robinson of the Bahamas and Brazilian right-hander Bo Takahashi.

Right-hander Silvino Bracho was not on Arizona’s 60-man roster to start the season after he suffered elbow stiffness while trying to rehabilitate from Tommy John surgery last year.