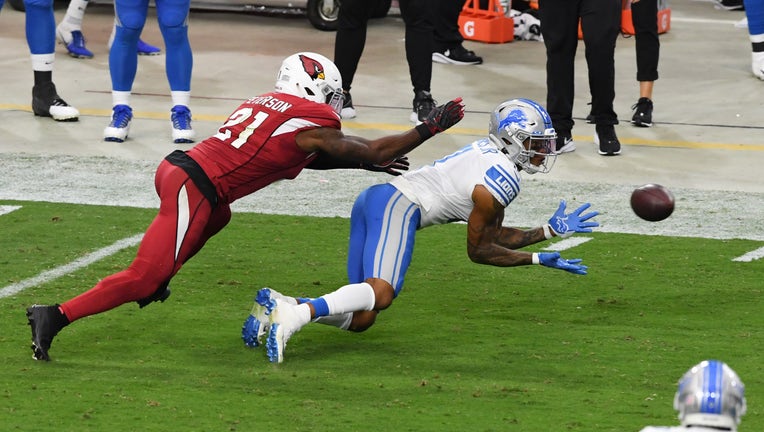 GLENDALE, ARIZONA - SEPTEMBER 27: Marvin Jones Jr #11 of the Detroit Lions makes a diving catch while being defended by Patrick Peterson #21 of the Arizona Cardinals during the fourth quarter at State Farm Stadium on September 27, 2020 in Glendale, A (Getty Images)

The Lions looked like they would take the lead with about two minutes left when Stafford completed a spectacular deep pass to Marvin Hall at the 1-yard line, but the play was called back when offensive lineman Halapoulivaati Vaitai was flagged for holding.

In the end, it didn’t matter. Stafford calmly led the Lions downfield, Prater connected on his fourth field goal of the afternoon and the Lions finally got to celebrate a victory. It was Prater’s 15th game-winning kick with less than 2 minutes to play in the fourth quarter or overtime.

Arizona’s Kyler Murray threw for 270 yards and two touchdowns and ran for a score, but he also had three interceptions. DeAndre Hopkins caught 10 passes for 137 yards and Andy Isabella had two TD receptions.

Arizona (2-1) pushed ahead 23-20 near the end of the third quarter when Murray connected with Isabella from 4 yards out for the pair’s second score. The 5-foot-9, 188-pound Isabella had a slow start last season as a second-round pick out of UMass but has become an important piece of the offense this year.

Detroit (1-2) took a 17-13 lead on Kenny Golladay’s 15-yard TD catch with 31 seconds left before halftime. Golladay, who led the NFL with 11 receiving touchdowns last year, missed the first two games of this season with a hamstring injury.

Golladay’s catch capped an entertaining first half that saw the teams trade the lead five times. Arizona’s Murray had another highlight-reel touchdown run, juking past Detroit’s Okudah for a 1-yard score and a 13-10 lead.

Murray completed 13 of 17 passes for 156 yards but also threw two interceptions, including one that gave Detroit the ball at the Arizona 27. Six plays later, the Lions took a 10-7 lead when Stafford hit Jesse James for a 5-yard score.

Adrian Peterson had a 27-yard run on his first carry of the game to push Detroit into Arizona territory, leading to a field goal. The 35-year-old Peterson, who is in his 14th NFL season, played six games for the Cardinals in 2017.

FACES IN THE CROWD

The Cardinals allowed family members and friends of players and coaches to watch the game at State Farm Stadium. The crowd was limited to less than 750 people and was spaced out behind the Cardinals’ bench.

The Cardinals stayed in the locker room for the national anthem for a third straight week. Most of the Lions lined up along the end zone, with some kneeling and others standing.

Cardinals: S Budda Baker (thumb) played in Sunday’s game with his right hand wrapped. NFL Network reported that Baker is expected to have surgery on the thumb next week and will likely miss at least one game. ... S Chris Banjo (hamstring) left the game early in the second quarter.

Cardinals: At the Carolina Panthers next Sunday.