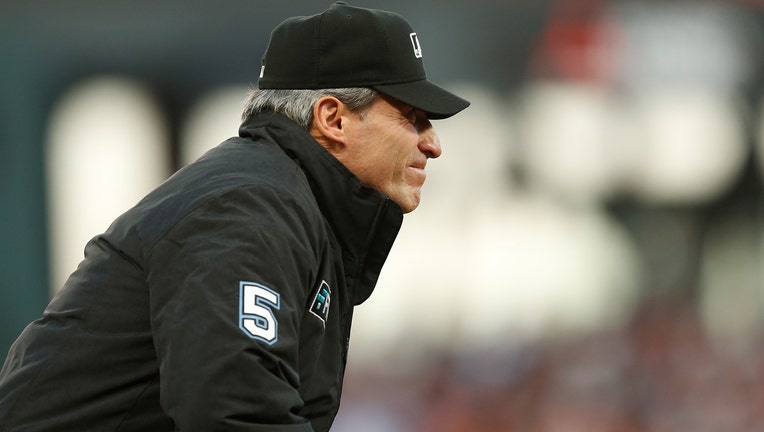 Umpire Angel Hernandez #5 officiates from third base during Game 5 of the NLDS between the Los Angeles Dodgers and the San Francisco Giants at Oracle Park on Thursday, October 14, 2021 in San Francisco, California. (Photo by Lachlan Cunningham/MLB Ph

NEW YORK - Ángel Hernández was on track to umpire in the 2018 World Series before getting overturned three times at first base on video reviews during Game 3 of that year’s AL Division Series between the New York Yankees and Boston, MLB wrote in response to his latest legal filing.

The Cuba-born Hernández was hired as a big league umpire in 1993 and sued in 2017, alleging he was discriminated against because he had not been assigned to the World Series since 2005 and had been passed over for crew chief.

Hernández served as an interim crew chief from 2011-16, at the start of the pandemic-delayed 2020 season and for part of the 2021 season, but has not been made a permanent crew chief.

"Hernández has not presented, and the record does not contain, a scintilla of evidence that MLB’s actions were based on his race or national origin," MLB wrote in a 58-page filing Wednesday.

MLB said Hernández does not have a legal basis to claim that he need not show discrimination statistically because of the relatively small sample sizes involved in his case.

Kevin Murphy, Hernández’s lawyer, did not respond to an email seeking comment.

In its reply brief Wednesday, MLB wrote that Joe Torre, then chief baseball officer, selected Hernández for the Division Series in 2018 "with the intention of providing him an opportunity to umpire in the World Series that year."

"Hernández did not capitalize on that opportunity and did not rise to the occasion," MLB wrote. "This was the first time since the advent of expanded instant replay in 2014 that an umpire had three calls overturned in a postseason game. Based on his performance during that Division Series playoff game, Torre was not confident in Hernández’s ability to perform effectively on an even more intense stage, and for this reason did not select him for the World Series that season."

MLB also cited Hernández’s failure to reverse a call that Oakland’s Adam Rosales had doubled and failed to clear the wall with what would have been a tying home run in the ninth inning at Cleveland on May 8, 2013.

"For years, Hernández has refused to admit that the call he made was incorrect and instead has attempted to blame the quality of the replay equipment," MLB said. "Hernández’s inability to put the Cleveland incident behind him — and his continued insistence that others were at fault for his wrong decision — was emblematic of why Torre considered him to be unsuitable for World Series assignments and a permanent crew chief role. The issue was not the bad call itself, but Hernández’s reaction to his mistake."

MLB wrote Wednesday that "Hernández has been quick to eject managers, which enflames on-field tensions, rather than issue warnings that potentially could defuse those situations. Hernández also has failed to communicate with other umpires on his crew, which has resulted in confusion on the field and unnecessary game delays." 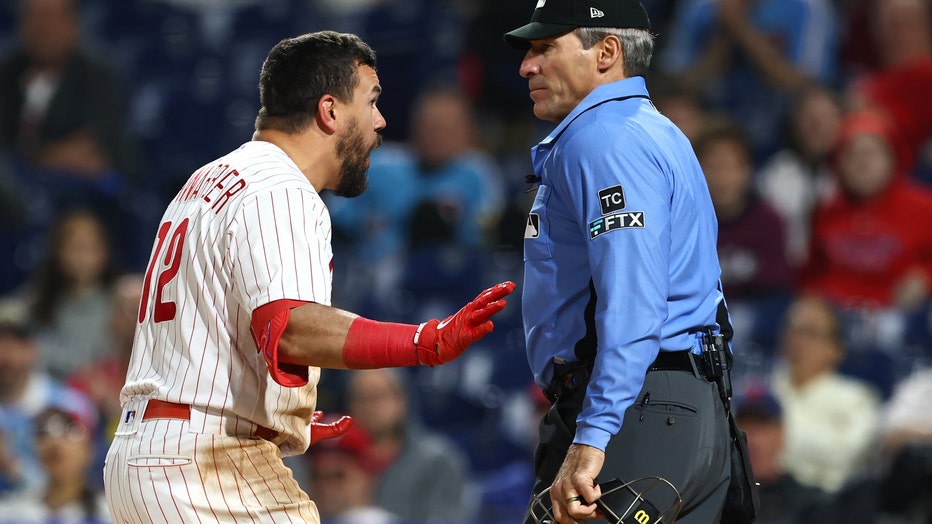 PHILADELPHIA, PA - APRIL 24: Kyle Schwarber #12 of the Philadelphia Phillies argues with home plate umpire Angel Hernandez after being called out on strikes during the ninth inning against the Milwaukee Brewers at Citizens Bank Park on April 24, 2022

MLB also claimed Torre observed Hernández throwing his headset after a video review overturned one of his calls in 2014 and misapplied a substitution rule, leading to a 14-minute delay and a protest during a game between Boston and Tampa Bay on July 24, 2019.

"During that investigation, MLB concluded that Hernández intentionally and deceptively eavesdropped on a confidential conversation with another umpire on his crew in order to hear what that umpire would say concerning the incident; and when MLB asked Hernández about it, he lied about his conduct," MLB wrote.

MLB also repeated an allegation it made earlier in the lawsuit that Hernández asked Cincinnati Reds pitcher Homer Bailey to autograph 11 baseballs following a game in which Bailey pitched a no-hitter in 2012.