Their first dividend was a dud.

Murray had an uneven first game since signing the $230.5 million deal, leading a sputtering offense that had no chance of keeping up with the high-scoring Kansas Chiefs in a 44-21 loss on Sept. 11.

"You can come into the game with the best feeling in the world and still get your (butt) beat if you don’t execute," Murray said.

The Cardinals used the No. 1 overall pick in the 2019 NFL draft to take Murray, a year after using the No. 10 pick on Josh Rosen. The former Oklahoma quarterback had a solid first three seasons, proving the elusiveness and arm strength that earned him the Heisman Trophy did indeed translate to the NFL.

Murray was the NFL’s Offensive Rookie of the Year in 2019 and made the Pro Bowl the past two seasons, earning him — after a dragged-out negotiation process — a top-tier contract that will keep him in the desert through 2028.

The Cardinals kept Murray under wraps through most of the preseason — he also had COVID-19 and a sore left wrist — giving him more opportunities to call plays than make them on the field.

Then came the regular season. Faced with a heavy Chiefs’ rush, Murray was able to scramble and keep a few plays alive, but had a hard time finding receivers downfield against Kansas City’s defensive shell.

Arizona fell into a big early hole and Murray wasn’t able to lead them back, finishing with 193 yards and two touchdowns on 22-of-44 passing — most of that with the game already out of reach. He had 29 yards rushing on five carries and was sacked twice.

The Cardinals finished with 282 total yards and trailed by 30 before scoring two fourth-quarter touchdowns.

"I thought he moved around and avoiding sacks when he could, but they have a great rush," Cardinals coach Kliff Kingsbury said.

The Cardinals knew going into the game their offense would have to put up big numbers to keep up with the prolific Chiefs.

They never could find a rhythm.

Arizona had a penalty on its first play of the game, went three and out on its first series and was down 14-0 by the end of the first quarter. Murray finally got the Cardinals going in the second half with an 11-play, 75-yard drive capped by James Conner’s 2-yard run.

Arizona also came up with a huge play when Dennis Gardeck stripped Juju Smith-Schuster and Byron Murphy recovered. Set up at the Chiefs’ 42-yard line, the Cardinals managed just five yards in three plays, setting up a fourth down at the 37. Knowing he needed touchdowns not field goals, Kingsbury opted to go four it and called a timeout to set up a play.

Arizona appeared to have called it right when Conner had a seam and no one in the right flat to cover him, but he got tripped up and so did the play. Murray was forced to heave the ball downfield and it fell incomplete, preventing Arizona from cutting into the Chiefs’ 23-7 halftime lead.

"That’s an unfortunate play — the guy trips up," Murray said. "You watch the play, it’s wide open, but in those moments, we’ve got to be better." 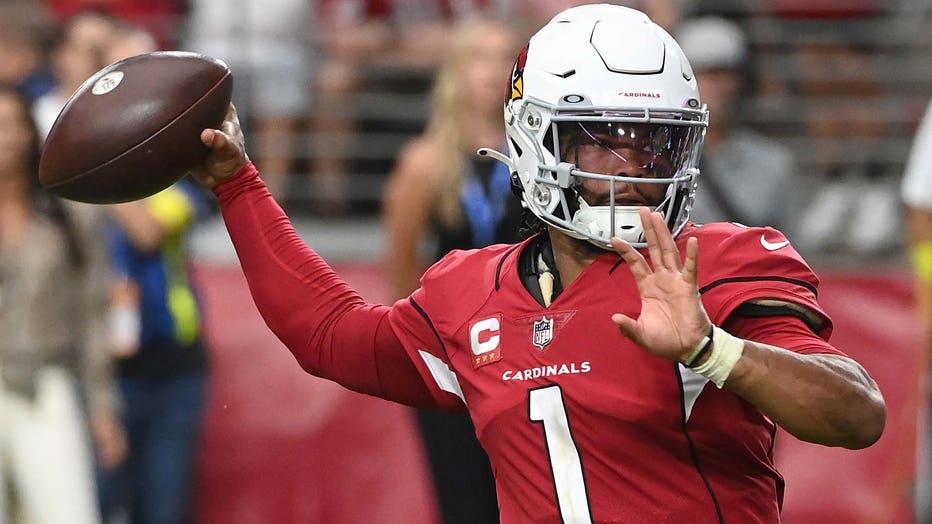 GLENDALE, ARIZONA - SEPTEMBER 11: Quarterback Kyler Murray #1 of the Arizona Cardinals throws a two-point conversion during the fourth quarter of the game against the Kansas City Chiefs at State Farm Stadium on September 11, 2022 in Glendale, Arizona (Photo by Norm Hall/Getty Images)