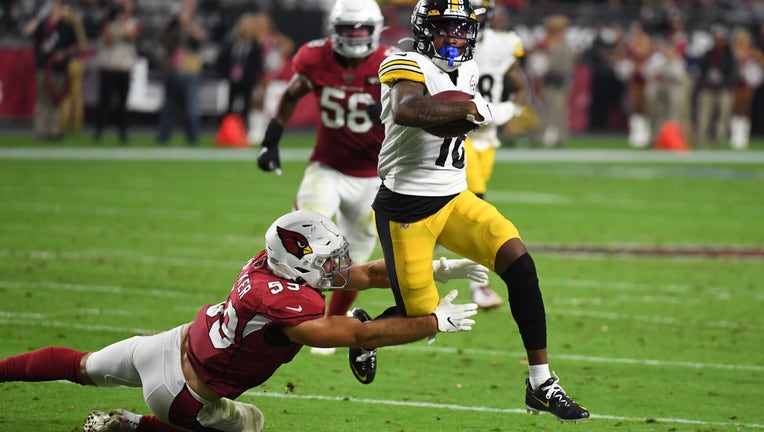 Diontae Johnson #18 of the Pittsburgh Steelers runs with the ball while avoiding a tackle by Joe Walker #59 of the Arizona Cardinals during the first half at State Farm Stadium on December 08, 2019 in Glendale, Arizona. (Photo by Norm Hall/Getty Imag

GLENDALE, Ariz. (AP) — Diontae Johnson ran for an 85-yard touchdown on a punt return and caught a pass for another score to lead the Pittsburgh Steelers over the Arizona Cardinals 23-17 on Sunday.

Pittsburgh’s defense had three crucial interceptions in the second half — two by Joe Haden and another by T.J. Watt —- to end Arizona drives, including two that had ventured into Steelers’ territory.

Pittsburgh (8-5) won for the seventh time in eight games to stay in the AFC playoff race. Rookie free agent quarterback Devlin Hodges made his third career start, completing 16 of 19 passes for 152 yards and a touchdown.

Hodges didn’t need to make many tough throws but came through with a good one in the third quarter, hitting Johnson in the front corner of the end zone for a 2-yard touchdown that gave the Steelers a 20-10 lead.

Arizona’s Kyler Murray completed 20 of 30 passes for 194 yards and two touchdowns, but his three interceptions were very costly.

They pulled within 20-17 on Murray’s 24-yard touchdown pass to David Johnson with 6:44 left, taking advantage of a short field after Steelers punter Jordan Berry fumbled. The Cardinals had a chance to win on the final drive, but Murray’s desperation fourth-down heave was intercepted by Haden.

The Steelers never trailed, pulling ahead 10-0 late in the first quarter after Johnson’s 85-yard touchdown. He caught Andy Lee’s 60-yard punt, used a few blocks and then cut across the field to his right, where he found lots of room to run.

From that point, he was escorted down the sideline by a handful of teammates, running into the end zone untouched.

The Cardinals spent the second quarter slowly recovering from the slow start. They capitalized after Pittsburgh’s Benny Snell Jr. fumbled, ending the ensuing drive with a 30-yard field goal to pull within 10-3.

Murray hit Charles Clay for a 5-yard touchdown with 1:51 left in the second quarter to tie the game at 10.

Cardinals LB Chandler Jones forced his sixth fumble of the season in the second quarter when he smacked Hodges’ right arm just as he was trying to throw. Pittsburgh recovered the fumble.

The play was also Jones’ 14th sack of the season and his 55th in 61 games since joining the Cardinals in 2016.

The Steelers host the Bills next Sunday.

The Cardinals host the Browns next Sunday.