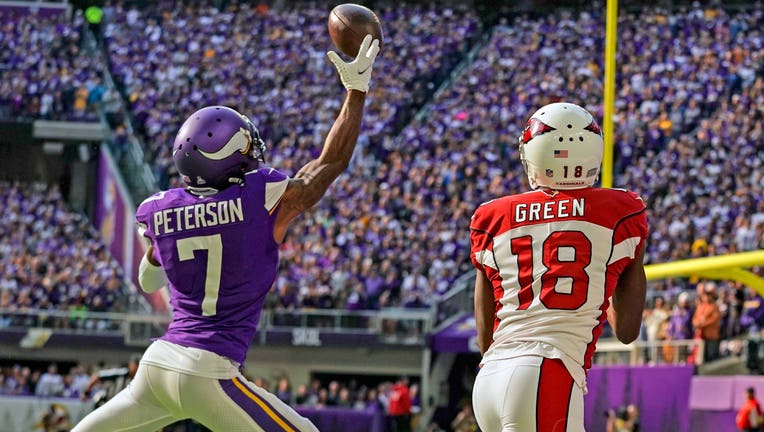 MINNEAPOLIS - As soon as Minnesota’s Harrison Smith began his interception return, Patrick Peterson turned to the Arizona sideline with his arms in the air and his legs dancing to celebrate.

Sunday was personal for the former Arizona cornerback.

Peterson celebrated several big plays, often jawing with the Cardinals sideline in Minnesota’s 34-26 victory. He was still talking after the game.

"I’ve been told a lot of things about me from that organization," Peterson said. "I got fan mails from the owner, saying I can’t tackle. I’m old. I lost it. So, I wanted to go show them that."

Peterson was matched up most of the game with Arizona receiver A.J. Green, who went without a catch while Peterson had four tackles and three pass deflections.

The extra intensity and constant trash-talking was intentional, he said. Since the Cardinals let Peterson become a free agent after the 2020 season, he said he still hasn’t spoken with general manager Steve Keim.

Peterson was bothered by the end of his 10-year tenure with Arizona, where he made eight Pro Bowls and was a three-time All-Pro while being regarded as one of the league’s top cover men.

Peterson mentioned after the game the derogatory email about him sent to the team’s ownership, a message that was printed out and placed on the chair by his locker while he was still with the Cardinals.

"I’ve still got it," Peterson said. "All I heard the last two years was, ‘He’s washed up. He’s done.’ Yeah, I know we’ve still got a second half of the season going, but I’m just getting started."

The Vikings followed his lead on Sunday.

"Sometimes I know in this game you have to have the emotion, but you also have to have the focus," Minnesota quarterback Kirk Cousins said. "He did a tremendous job of playing with passion but not letting it go too far. He’s a pro."

The Cardinals certainly heard Peterson, even if they said they weren’t bothered by him.

"He loves the game, we love the game," wide receiver DeAndre Hopkins said. "We don’t look into it that much like you guys do. Pat P’s a competitor. You all love his spirit."

"He’s a guy that everybody has a ton of respect for, same with Jordan Hicks," Kingsbury said, mentioning the former Cardinals linebacker who’s starting with Peterson for the Vikings.

"Great teammates and great players for this organization. So anytime you go against your old team there’s going to be that competitive fire."

Hicks, in his first year with the Vikings after being released by Arizona, did most of his talking before the game when he addressed the team on Saturday night.

"I would much rather be here, 6-1," Hicks said after the game. "This team is resilient and finds ways to win. This team has really come together in the first year of a coaching staff and is special. You do not see that very often."

Hicks broke out his own celebration aimed at the Arizona sideline following a fourth-down tackle to prevent a first down late in the fourth quarter.

Against a motivated defense, quarterback Kyler Murray and the Cardinals made too many mistakes. For the seventh time in eight games, they trailed at halftime.

Murray threw two second-half interceptions and Arizona fumbled a punt that was recovered by Minnesota. Eno Benjamin was also called for an illegal blindside block as Murray ran for a first down on the final drive.

"It’s been that way all season, I think, whether it’s penalties, crucial situations, turnovers, things of that nature," Kingsbury said. "Effort has been outstanding, just not clean enough in any phase to get it done against these top-level teams and that’s coaches and players."

Murray had two of his four sacks on the last two plays as time ran out, giving Peterson more reason to celebrate.