SAN DIEGO, Calif. - At least two people were killed after a drenching storm that flooded areas and buried the Sierra Nevada in snow, authorities said.

One person died Friday afternoon after seven people were trapped in a flooded storm drain system near a Mexican border crossing. Border Patrol agents called rescuers to a trench in the San Ysidro area of San Diego.

It wasn’t immediately clear how the people became trapped. But the San Diego Union-Tribune said people sometimes try to cross illegally into the United States through such systems when the grates are opened during heavy rains.

In the Sierra Nevada, a skier died Thursday after he was found upside down in deep snow near a chairlift and intersecting trails at Mammoth Mountain, the ski resort said. The resort reported the storm had dropped more than 9 feet (2.74 meters) of snow as of Friday afternoon, with more falling.

The atmospheric river weather system that barreled ashore in Northern California early in the week swept through Southern California overnight, followed by remnants that unleashed downpours and hail. The threat of lightning forced some beaches to close. There also were concerns that rain could send mud and debris rushing down areas burned bare by last year’s wildfires. 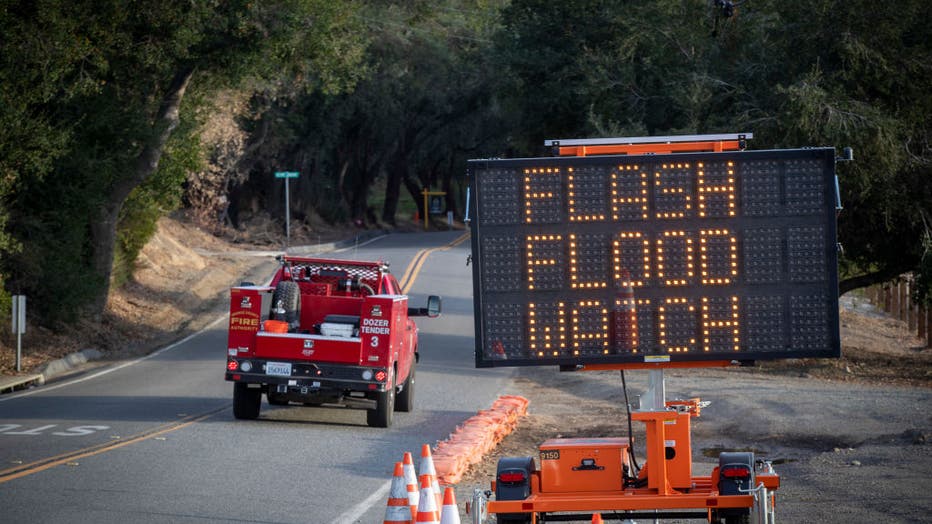 SILVERADO CANYON, CA - January 28: A fire vehicle passes by a sign warning Silverado Canyon residents who were affected by the Bond Fire of a flash flood watch and voluntary evacuation in advance of an approaching heavy rain storm that could bring mu

There were no immediate reports of large-scale debris flows in Southern California. But mud slid off burned slopes in Orange County’s Silverado Canyon and from a fire-scorched hillside onto State Route 39 on the foothills of the San Gabriel Mountains.

About 8,200 residents had been ordered in advance to evacuate from areas near fire scars east of Los Angeles in San Bernardino and Riverside counties. Evacuation orders and warnings were lifted by Friday evening.

Crews are picking up the pieces after Thursday night's severe weather.

Avalanche concerns continued in the Eastern Sierra. But most weather warnings were expiring, and the state was able to turn to cleanup, damage assessments and tallying astonishing rain and snowfall.

Along the scenic central coast, Highway 1 was closed near Big Sur after a section of the roadway collapsed when the cliffside below gave way amid torrential rain.

There was no estimate on when the popular driving route would reopen, the California Department of Transportation said.

On Friday, Gov. Gavin Newsom issued an emergency proclamation for Monterey and San Luis Obispo counties because of the storms that in addition to damaging Highway 1 forced thousands to evacuate.

Down the coast, a water rescue team helped a woman to safety after she became trapped on a road between two rain-swollen creeks in Santa Barbara County on Thursday.

The storm also unleashed a huge amount of snow in the Sierra, where the annual snowpack normally provides about a third of the state’s water supply.

California Department of Transportation plows worked to clear mountain highways, and others were open with strict chain requirements.

Yosemite National Park officials said the snowstorm would force it to remain closed until at least Feb. 1.

The park has been closed since a huge windstorm hit early last week, knocking down 15 giant sequoias and slamming trees onto trucks and buildings. The damage has been estimated as high as $200 million.

Atmospheric rivers are long, narrow bands of water vapor that form over an ocean and flow through the sky. They occur globally, but they are especially significant on the West Coast of the United States, where they create 30% to 50% of annual precipitation and are linked to water supply and problems such as flooding and mudslides, according to the National Oceanic and Atmospheric Administration.

The atmospheric river was part of a major change in weather for California, which had significant drought conditions for months. The dryness contributed to wildfires that scorched more than 6,562 square miles (17,000 square kilometers) in 2020, the most in recorded modern history.