Dusty Vinson lives in Dawson Springs, Kentucky where a tornado on Dec. 10, 2021, swept through his neighborhood destroying multiple homes and businesses.

This year was a chaotic and deadly one for weather, with major storms and flooding impacting states from coast to coast, while a new wildfire record was set in California.

Here are five of the biggest weather stories of 2021:

Damage was reported in Lafitte, Louisiana, on September 8 as severe thunderstorms impacted parts of the New Orleans area that were still reeling from Hurricane Ida’s landfall on Aug. 29. (Credit: @cultmenephila via Storyful)

Stunning images and stories emerged in the aftermath of Hurricane Ida, which made landfall in Louisiana on Aug. 29 as a Category 4 storm before its remnants drenched the Northeast, killing dozens across its path.

In Louisiana, images showed caskets near damaged homes after they were washed away from cemeteries by floodwaters. In one part of the state, a video posted on social media captured a group of men rescuing a cow that became stranded in a tree.

Farther north, another video showed the moment floodwaters caused by the remnants of Tropical Storm Ida burst through the basement wall of a New Jersey home.

This footage, taken at the Metropolitan Avenue subway station in Brooklyn, New York shows passengers dodging floodwater as it poured down onto the platform. (Credit: @auntiebats via Storyful)

In images captured by a Cranford family's security camera, the family's teenage son can be seen walking moments before the floodwaters trapped him and his mother inside their basement.

Others living in basement apartments were killed in the New York City area as a result of the storm.

The New York Police Department posted footage online of an officer trying to get into a flooded basement in the Queens borough. 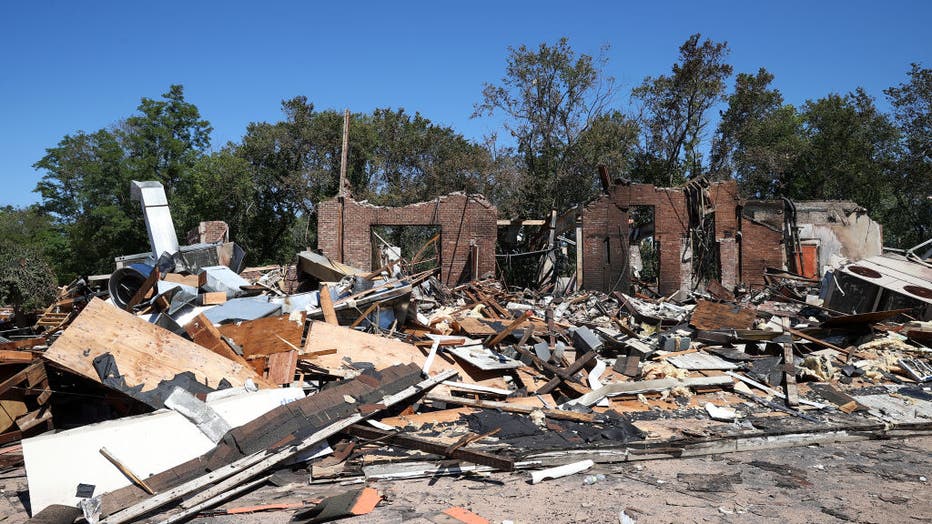 A former restaurant is seen with all debris after heavy rain and storm from remnants of Hurricane Ida in Manville, New Jersey, on Sept. 7, 2021. (Photo by Tayfun Coskun/Anadolu Agency via Getty Images)

The sprawling blaze, which burned 963,309 acres in Northern California, started on July 13 and was finally contained on Oct. 25, according to Cal Fire.

More than 1,000 buildings were destroyed as crews fought to contain the flames, the Associated Press also reported.

Many consider Dixie the biggest single-source fire in state history because 2020's massive 1,032,648-acre August Complex was a "complex fire," made up of lightning-sparked blazes.

Winter storm shuts off power for millions in Texas

A long line formed outside a supermarket in Austin, Texas, on Tuesday, February 16, after storms caused widespread power outages across the state.

A mid-February winter storm knocked out power for more than 4 million people in Texas, leaving residents struggling to find warmth amid frigid temperatures.

The blast of wintry weather was blamed for at least 100 deaths, according to the Associated Press.

The weather also jeopardized drinking water systems. About 13 million Texans — or nearly half the state's approximately 29 million residents – were placed under an advisory to boil drinking water, according to reports.

In November, Texas Gov. Greg Abbott promised residents in the Lone Star state that the "lights will stay on" this winter.

Asked by FOX 7 for his thoughts and confidence about the power grid, Abbott said he is "very confident" as he "signed almost a dozen laws that make the power grid more effective."

A tornado ripped through Mayfield, Kentucky late Friday, leaving behind a trail of catastrophic and deadly destruction. Credit: Elora Harkness via Storyful

A December weekend of tornadoes and other severe weather in five states left at least 88 people dead, including 74 in Kentucky, where a tornado destroyed a candle factory in the hard-hit city of Mayfield.

Michael Dossett, the director of the Kentucky Division of Emergency Management, described the statewide damage as "a massive event, the largest and most devastating in Kentucky’s history."

In Illinois, a tornado flattened part of an Amazon warehouse in Edwardsville, killing six of the company’s workers.

And in Missouri, a heartbreaking photo emerged of a 9-year-old girl taking shelter with her two siblings in a home’s bathroom, fifteen minutes before a tornado destroyed the property and killed her, her aunt said.

The month of June this year was the hottest on record in North America. The average temperature across the contiguous U.S. was 4 degrees above average at 72.6 degrees Fahrenheit, according to the National Oceanic and Atmospheric Administration.

In the Pacific Northwest, Seattle and Portland experienced multiple days of temperatures exceeding 100 degrees, including 109 degrees in Spokane, the highest temperature ever recorded there.